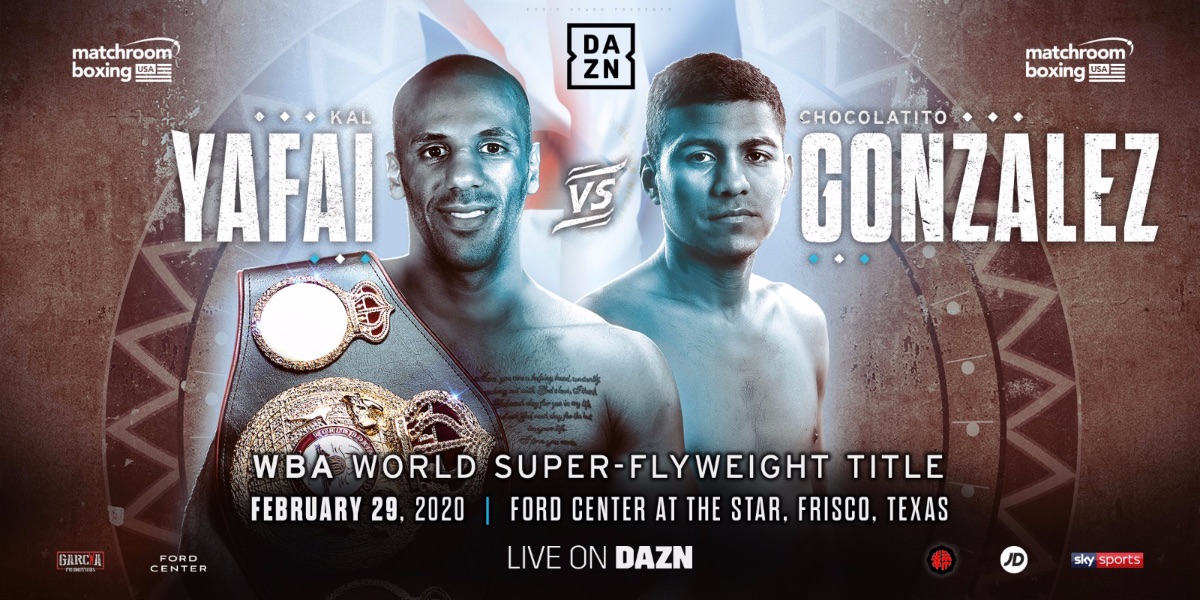 Kal Yafai will defend his WBA World Super-Flyweight title against Roman ‘Chocolatito’ Gonzalez on Saturday February 29 at Ford Center at The Star in Frisco, Texas, live on DAZN in the US and on Sky Sports in the UK.

Yafai (26-0 15 KOs) makes the sixth defense of his WBA strap and returns to the States having gone the distance with dangerous Dominican Republic challenger Norbelto Jimenez in his last defense in Providence, Rhode Island in June.The Birmingham star and Britain’s longest reigning World champion has been gunning for a major fight and has certainly landed that in the shape of Chocolatito (48-2 40 KOs) the former four-weight World ruler and pound for pound king who returned to action in December with victory in Japan. The Nicaraguan is gunning for a return to his World champion status and both fighters are thrilled to be clashing on a huge night in the Lone Star state.

“I wanted the biggest possible fight available and after the Juan Francisco Estrada unification fell through, I had the opportunity to fight Chocolatito, the former pound for pound king!” said Yafai.

“Chocolatito is someone that I have idolized as I worked my way up to become World champion myself, so it doesn’t get much bigger than this and it will bring out the best in me. I can’t wait, it is a case of when idols become rivals and I am so honored to share the ring with him but also show the world that I am an elite World champion.”

“First of all, I would like to thank Mr. Eddie Hearn for giving me this opportunity to fight for the World championship,” said Chocolatito. “God has responded to my prayers once again. I want to thank God and Teiken foremost. Also, the Champion, Kal Yafai for giving me the opportunity to fight for the championship once again. I know this will be a very hard fight, but it will be worthy of all our efforts and determination.”

“This is a brilliant fight on an absolute monster of a show!” said promoter Eddie Hearn. “Kal Yafai has been waiting for an opportunity like this for a long time and now he gets it against a legend of the sport in Chocolatito. This card in Texas is going to be epic and you can expect Yafai v Chocolatito to be an all-out war!”

Yafai and Chocolatito is part of a massive night of action in Frisco, topped by the Welterweight showdown between Mikey Garcia and Jessie Vargas, with all-action Mexican Julio Cesar Martinez making the first defense of his WBC World Flyweight title against unbeaten Welsh challenger Jay Harris – and more stellar action to be added to the card.