Each week Real Combat Media Publicity will send you the upcoming fights on the ESPN PLUS App . ESPN Plus App is an app that will work on your smart TV or mobile devices, where you can purchase a monthly subscription for just $4.99 a month or sign up to a 7-day free trial to watch the best in boxing and MMA events each week.

The ESPN PLUS App is home to Top Rank Championship Boxing, Frank Warren UK Boxing and all of the UFC major events including the Dana White Contender Series, UFC PPV with all the behind the scenes content of your favorite UFC Fighters. If you have already purchased the ESPN PLUS App , you can use this as a weekly guide to organize your viewing schedule. 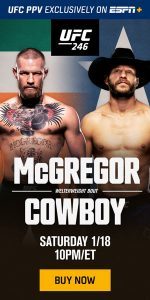 GET THIS FIGHT ON ESPN PLUS

UFC 246: McGregor vs. Cowboy streams exclusively on ESPN+ PPV on Saturday, Jan. 18, at 10 p.m. ET from the T-Mobile Arena in Las Vegas, marking the one-year anniversary of UFC on ESPN+ and ESPN. UFC’s first card of the year features its biggest star, two-division champion Conor McGregor (21-4), making his long-awaited and highly-anticipated return to the Octagon in a marquee welterweight main event against UFC’s all-time leader in wins and finishes, Donald “Cowboy” Cerrone (36-13,NC). In the co-main event, former champion and current No. 3-ranked bantamweight Holly Holm (12-5) will face No. 5-ranked Raquel Pennington (10-7) in a rematch of Holm’s 2015 UFC debut.

Arguably the biggest star in mixed martial arts’ history, McGregor returns to the Octagon after a 15-month layoff. The former UFC Featherweight and Lightweight champion, he enters the Octagon with a record of 21 wins and 4 losses. The first simultaneous two-belt champion in UFC history, McGregor has had spectacular wins over Nate Diaz, Chad Mendes, Max Holloway and Dustin Poirier in addition to championship victories over Jose Aldo and Eddie Alvarez.

A perennial fan favorite, and one of the most exciting fighters in mixed martial arts, Cowboy Cerrone enters the biggest fight of his career with the record for most wins and finishes in UFC’s history, with 23 and 16, respectively. A former lightweight title challenger, Cerrone has delivered thrilling victories over former UFC champions Benson Henderson and Eddie Alvarez as well as Al Iaquinta, Edson Barboza, Mike Perry and Matt Brown.

In the co-main, former UFC women’s bantamweight champion Holm, returns for a rematch of her UFC debut and victory, in 2015, against Pennington. Holm looks for a win following a title-challenge TKO loss against current bantamweight and featherweight champion Amanda Nunes at UFC 239 (July 2019). Pennington, who has won five out of her last seven fights, looks for a second-straight victory following a split decision win against Irene Aldana during UFC San Antonio (July 2019).

ABOUT REAL COMBAT MEDIA: Real Combat Media was founded in 2012. Since then, realcombatmedia.com has become one of the most premier international boxing and mixed martial arts online publications. Our talented international team covers the latest combat news 24 hours a day to provide the combat community with the best news in the industry for our readers. We also provide a unique up to the minute combat news aggregate on our home page so you will never miss a breaking news story. Our home page includes boxing odds, MMA odds, boxing results, boxing history, fight polls, forums, boxing, and MMA rankings.

Our Real Combat Media Fight Store, founded in 2019, provides combat tickets, memorabilia, health products, DAZN and ESPN PLUS APP programming so you will never miss a major fight. Our mission is to spread positive awareness of combat sports and grow MMA and boxing to every region of the world.