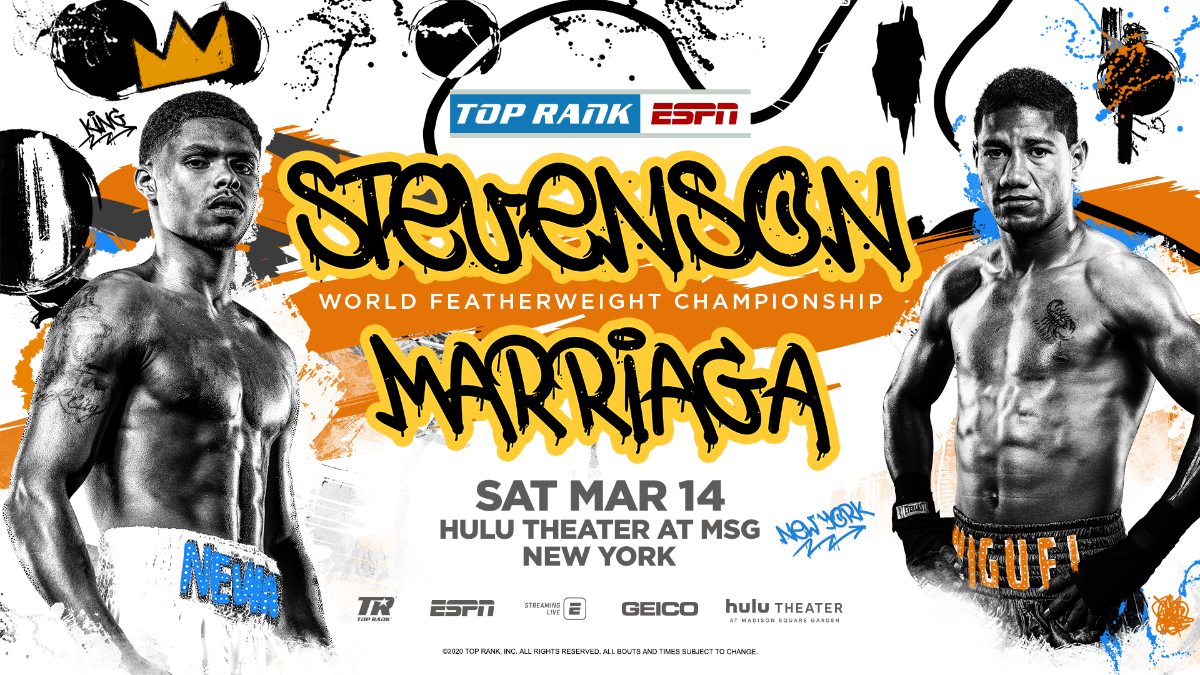 Conlan-Preciado and a 10-round female super featherweight showdown between the unbeaten Mikaela Mayer and former featherweight world champion Melissa Hernandez will stream live in English and Spanish on ESPN+ beginning at 8 p.m. ET/5 p.m. PT.

Promoted by Top Rank, tickets for the Stevenson-Marriaga and Conlan-Preciado cards are priced at $200, $100, $70, $40 and $30 (not including applicable fees) and go on sale Friday, Feb. 7 at 12 p.m. ET. Tickets can be purchased at the Madison Square Garden Box Office, all Ticketmaster outlets, Ticketmaster charge by phone (866-858-0008) and online at www.ticketmaster.com or www.MSG.com.

For a limited time, when purchasing a ticket online to one of these cards, you will then be given the option to purchase discounted tickets to the other event.

“What a great two nights of boxing on ESPN and ESPN+, as we get to see Shakur Stevenson defend his title against the big-punching Marriaga and Mick Conlan continue one of boxing’s great traditions,” said Top Rank chairman Bob Arum. “New York is going to turn out in force to watch two of boxing’s great young stars.”

“We’ve been trying to make this fight with Miguel Marriaga for a long time now,” Stevenson said. “I wanted a strong opponent for my first title defense. He’s been in the ring with multiple world champions, and I am ready to prove that I am the best featherweight in the world. This is my fourth fight at Madison Square Garden, but my first as a world champion, and it will be my best performance yet. I know all of my East Coast fans will come out and support on March 14.”

Marriaga (29-3, 25 KOs), one of the division’s hardest punchers, is hoping the fourth time’s a charm. He fell short in previous world title challenges against Vasiliy Lomachenko, Oscar Valdez and Nicholas Walters, but he’s riding a four-bout winning streak (all by KO). He last fought in December 2019, knocking out Alfredo Mejia Vargas with a body shot. A native of Arjona, Colombia, he’s been scouting Stevenson as a potential foe.

“I always wanted this fight, and the time is right now that he’s a world champion,” Marriaga said. “He speaks often about how people are ducking him, but here I am. Colombia will have a new world champion March 14.”

Magdaleno (27-1, 18 KOs) is 2-0 as a featherweight since losing his junior featherweight world title to Isaac Dogboe in one of the best fights of 2018. A native of Las Vegas, he is coming off a unanimous technical decision over Rafael Rivera last August in Los Angeles. Lukas (23-0, 16 KOs), from Namibia, is one boxing’s best-kept secrets, a nine-year pro who has three knockouts in his last four fights.

“The guys people don’t know about are the dangerous ones,” Magdaleno said. “With the mindset I have now, I don’t think anybody can beat me. “My trainer {Jorge Capetillo} and I are looking ahead. I’m just waiting on what’s next, but we have to take care of business against Lukas first. Once we do that, I have every right to call out all of the champions.”

“There is a Desert Storm coming to New York in the name of Sakaria Lukas, and this storm is targeting the destruction of Jessie Magdaleno,” Lukas said.

Conlan (13-0, 7 KOs) has made Hulu Theater at Madison Square Garden his professional home, as he turned pro in front of a sold-out St. Patrick’s Day crowd there back in 2017. In the years since, he has graduated from prospect to contender, as he’s the No. 1 contender for the title held by Stevenson. He went 3-0 in 2019, including a decision win in December over Olympic nemesis Vladimir Nikitin. Preciado (20-2-1, 13 KOs) will be making his third ring appearance outside of his native Colombia, and he has won two in a row since a KO loss to former world title challenger Hiroshige Osawa.

“I’m honored to return to the Mecca of Boxing, Madison Square Garden, and fight for the fourth straight St. Patrick’s Day,” Conlan said. “I know how tough Preciado is, but this fight is a great test as I continue on my path towards becoming a world champion. Fighting in New York City is very special for me. The fans have been very supportive right from the beginning at my pro debut on St. Patrick’s Day in 2017, and I look forward to putting on another tremendous show for them this year.”

“The fans will be there to see Conlan, but mark my words, they will remember me,” Preciado said. “I am more than just another ‘opponent.’ When I win, I won’t be surprised. I am prepared for a hard 10 rounds.”

Mayer (12-0, 5 KOs), who turned pro in August 2017 after representing the United States at the 2016 Rio Olympics, has been dominant in the paid ranks. One of the 130-pound division’s top contenders, she last fought Oct. 26 on the Shakur Stevenson-Joet Gonzalez undercard, knocking out Alejandra Zamora in six rounds. Hernandez (23-7-3, 7 KOs), winner of four of her last five, won the WBC female featherweight world title in 2012. Last April, she dominated then-unbeaten Selina Barrios over eight rounds.

“I’m excited to be fighting again in New York City, especially on St. Patrick’s Day at Madison Square Garden,” Mayer said. “I love that I’m going up against a former world champion because it’s going to make for a very competitive, exciting event. I’m also happy to be on a Mick Conlan card. He has a huge Irish and European fan base whom I hope to impress and turn into fans. See you at MSG!”

Use the hashtags #StevensonMarriaga and #ConlanPreciado to join the conversation on social media.