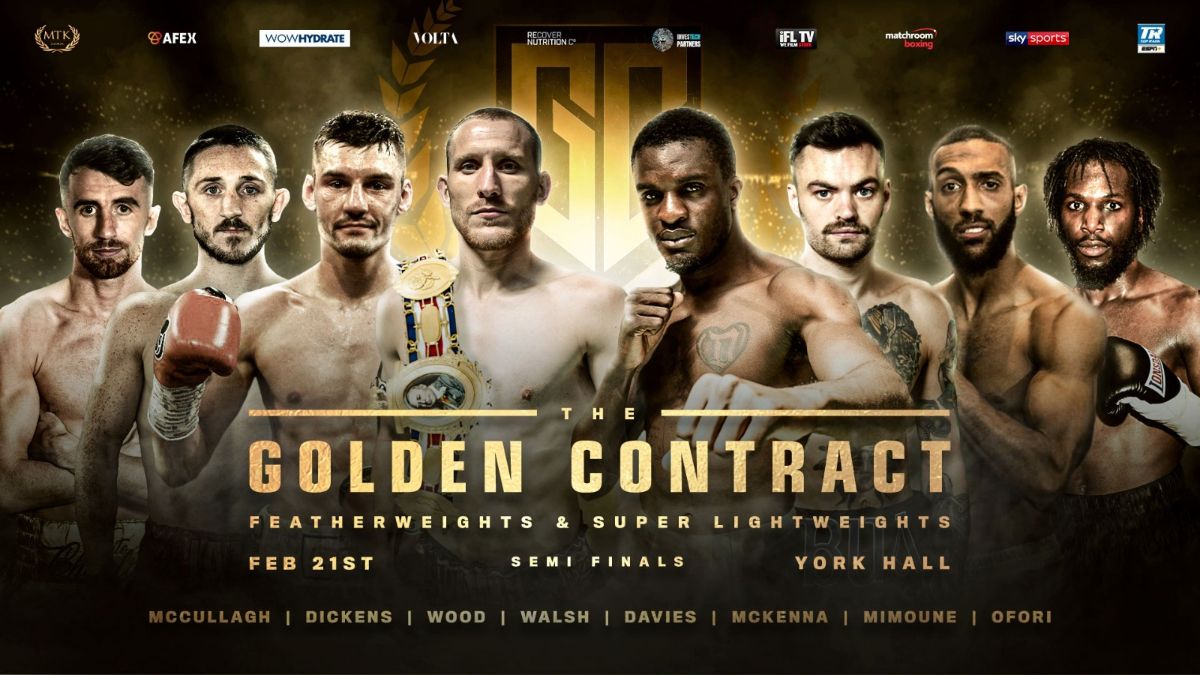 (Feb. 18, 2020) — The featherweight and super lightweight MTK Global Golden Contract tournament fields will be narrowed down Friday, as the 10-round semifinal bouts will be contested from London’s York Hall. ESPN+ will stream the fights beginning at 2:30 p.m. ET/11:30 a.m. PT.

Former top prospect Davies (20-2, 15 KOs) revitalized his career in the quarterfinals with a seventh-round stoppage over Logan “Korican Kid” Yoon. Ofori (10-1-1, 3 KOs) was saddled with a draw in the quarterfinals against Kieran Gething, but the referee broke the deadlock and scored the contest for Ofori. McKenna (20-1-1, 6 KOs), from Belfast, has won four in a row and notched a near-shutout over Mikey Sakyi to advance. Former European Union and French welterweight champion Mimoune (22-3, 3 KOs) rose from a second-round knockdown in his quarterfinal bout to stop Darren Surtees in the fifth round.

Former British featherweight champion Walsh (25-2-2, 12 KOs) knocked out then-beaten Hairon Socarras in nine rounds to punch his semifinal berth. McCullagh (14-0, 6 KOs) bested Razaq “Lionheart” Najib via unanimous decision in the quarterfinals and is campaigning as a featherweight after winning the WBO European junior featherweight belt in October 2018. Former world title challenger Dickens (28-3, 11 KOs), from Liverpool, England, has won six in a row since a two-fight losing skid. He won a clear points verdict over former European Union and Spanish featherweight champion Carlos Ramos to advance to the semifinals. Wood (23-1, 13 KOs) made perhaps the most emphatic quarterfinal statement, as he knocked out the previously unbeaten Irish Olympian Davey Oliver Joyce in nine dominating rounds.

The light heavyweight Golden Contract semifinal bouts will be contested Friday, March 20, live on ESPN+. The championship bouts of all three weight classes will be fought on a date to be announced.