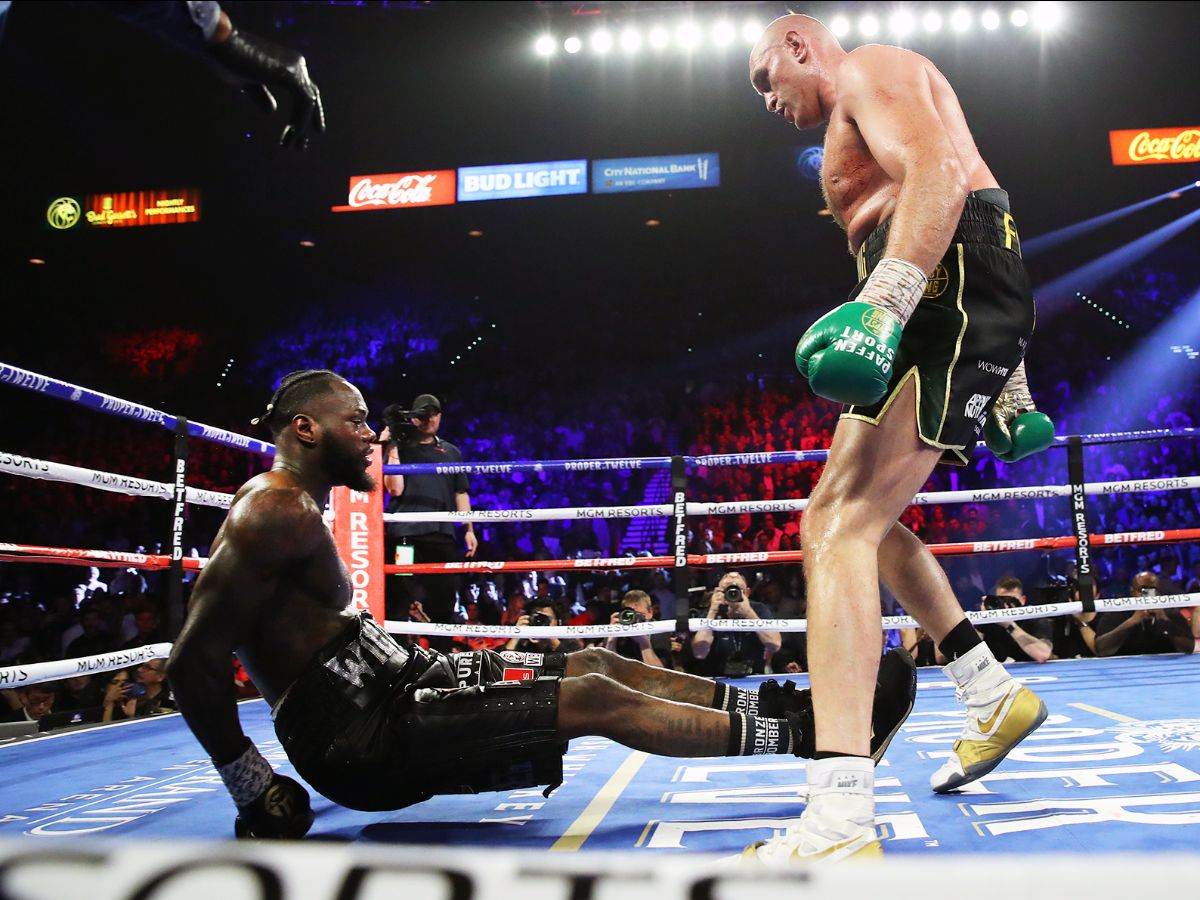 “A big shout out to Deontay Wilder,” said Fury. “He came here tonight and he manned up and he really did show the heart of a champion. I hit him with a clean right that dropped him and he got back up. He is a warrior. He will be back. He will be champion again. But I will say, the king has returned to the top of the throne!”

“Things like this happen,” said Wilder. “The best man won tonight, but my corner threw in the towel and I was ready to go out on my shield. I had a lot of things going on heading into this fight. It is what it is, but I make no excuses tonight. I just wish my corner would have let me go out on my shield. I’m a warrior. He had a great performance and we will be back stronger.”

The highly anticipated rematch was the most eagerly awaited heavyweight fight in decades after their controversial split draw in 2018. After an unprecedented promotion, the two heavyweight giants traded leather in the middle of the ring in front of 15,816 fans.

While both men landed good shots in the first two rounds, Fury broke through in round three with a right hook that put Wilder down late in the round. While Wilder was able to make it through the round and continue fighting, his legs appeared weakened and in round five Fury scored another knockdown, this time with a body shot.

Referee Kenny Bayless deducted a point from Fury late in round five, but it didn’t stop Fury from coming forward and continuing to use his height and weight advantage to push Wilder around the ring. In round seven, Fury had Wilder cornered and unloaded with a series of power punches that prompted Wilder’s corner to stop the bout, which the referee officially did at 1:39 of the round.

According to CompuBox, Fury was the busier and more effective puncher, out throwing Wilder 267 to 141 and out landing him 82 to 34, including big fifth and sixth rounds where he landed 16 and 14 power punches respectively.

The co-main event saw former heavyweight champion Charles Martin (28-2-1, 25 KOs) score a one-punch knockout over Gerald “El Gallo Negro” Washington (20-4-1, 13 KOs) in the sixth-round of their showdown.“I knew that I had him hurt a few times in the fight,” said Martin. “Every round I think I hurt him, but I just couldn’t finish him. I knew that I had to take my time in there. It took me some rounds to catch up with him, because he’s very quick on the retreat.”

Martin landed a powerful left cross late in the round to send Washington to the mat, eventually forcing referee Tony Weeks to wave off the bout 1:57 into the round. The victory is Martin’s third-straight since the beginning of 2019.

“The referee did what he thought was right,” said Washington. “He’s a top notch ref so I won’t complain about the stoppage. He put me down and I got up, so I definitely wanted to get back to it.”

“This win means a lot,” said Martin. “It shows that I’ve been working hard. The people can see it. I was never hurt at any point. This has just given me more confidence in myself. I can take the punches and give the punches.”

Emanuel “Vaquero” Navarrete (31-1, 27 KOs) made the fifth successful defense of his WBO junior featherweight world title in less than a year, knocking out Filipino challenger Jeo Santisima (19-3, 16 KOs) in the 11th round. Navarrete, from San Juan Zitlaltepec, Mexico, is boxing’s most active world champion, as he has won five in a row by stoppage since winning the world title via decision over Isaac “Royal Storm” Dogboe in December 2018.

In the PPV opener, Sebastian “The Towering Inferno” Fundora (14-0-1, 9 KOs) won via unanimous decision over Australia’s Daniel Lewis (6-1, 4 KOs) in their 10-round battle of super welterweight unbeatens.

“I think it was a fair decision and a good fight,” said Fundora. “There were a lot of hard punches. I knew he would be tough. When they told me I was fighting an Olympian, I knew it would be a tough fight. He probably had more experience than me, but we prepared the right way and got the win.”

The nearly 6’7” Fundora used his extraordinary reach to land big straight left hands and uppercuts against his smaller opponent, as Lewis tried to navigate the distance and land power shots on the inside. Both men had their noses bloodied in a fight that featured 272 power punches landed combined.

After 10 rounds, Fundora’s activity and power punching accuracy proved to be the difference as he threw over 200 punches more than Lewis and connected on 43% of power punches compared to 29% from Lewis. The judges all saw the bout in favor of Fundora, by scores of 99-91, 98-92 and 97-93.

“Whether we’re fighting on the inside or the outside, I always want to be the busier fighter,” said Fundora. “The more punches you throw, the more you’re going to land. It’s the way I like to fight.”

The action packed fight was contested primarily on the inside, with Ananyan taking control in round seven when he landed a series of right hands, punctuated by a left hook that sent Matias into the ropes to score a knockdown. While Matias was able to make it through the fight and go the distance, Ananyan finished strong and won the decision by scores of 96-93 and 95-94 twice.

Live streaming action prior to Prelims saw Gabriel Flores Jr. (17-0, 6 KOs), the 19-year-old lightweight sensation from Stockton, Calif., secure an eight-round unanimous decision over Matt Conway (17-2, 7 KOs) by scores of 80-71 twice and 79-72. Flores knocked Conway down in the opening round.

Sensational 17-year-old prospect Vito Mielnicki Jr. (5-0, 3 KOs) dropped Corey Champion (1-3, 1 KO) in round one on his way to a unanimous decision in their four-round welterweight fight, winning by scores of 40-34 and 40-35 twice on the judges’ cards.

Tyson Fury stablemate Isaac “The Westgate Warrior” Lowe (20-0-3, 6 KOs) remained unbeaten, defending his WBC International featherweight belt via 10-round unanimous decision over former two-time world title challenger Alberto Guevara (27-6, 12 KOs). Lowe knocked down Guevara in the eighth round and pulled away to win by scores of 96-87 twice and 95-88. Both fighters had three points deducted for assorted fouls.

The opening bout saw unbeaten prospect Rolando Romero (11-0, 10 KOs) score a second round TKO over previously undefeated Arturs Ahmetovs (5-1, 2 KOs) after referee Robert Hoyle halted the action 1:22 into the round.