Salamov scheduled to make Top Rank debut in the summer 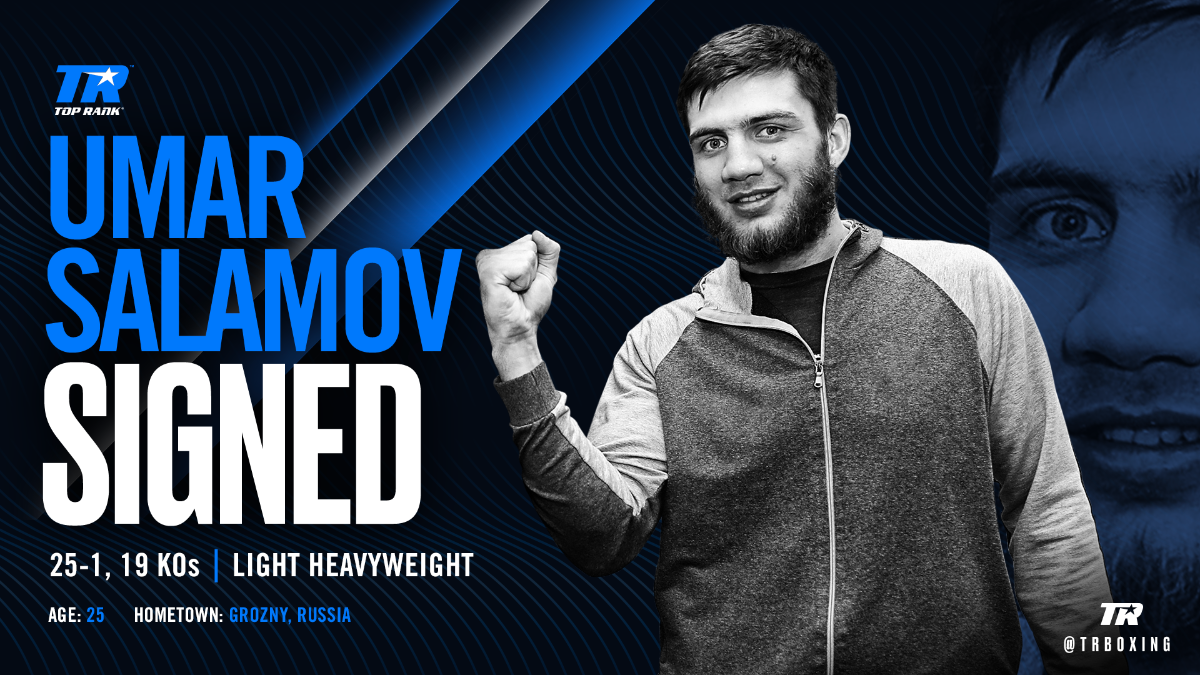 (Feb. 25, 2020) —Top Rank has signed Russian light heavyweight Umar Salamov, the WBO No. 2 contender, to a multi-fight promotional agreement. From Grozny, Russia, the 25-year-old is trained and managed by Kevin Barry, who is known for his work with the likes of David Tua, Robbie Peden and Joseph Parker.

Salamov, who is scheduled to return on an ESPN platform this summer, trains with Barry at the Team Barry Gym in Henderson, Nev.

“Now approaching the biggest time in my career, I am excited and very pleased to be signing with the world’s top boxing promoter, Mr. Bob Arum and Top Rank,” Salamov said. “I am confident that I now have the right team to take me all the way to a world championship. This opportunity is huge, and I plan on making the most of it.”

Said Barry: “At 25 years old, Salamov is a tremendous talent. At 6-foot-3½, he is a huge 175-pounder. His power and unorthodox style make him a difficult and dangerous challenge for any of the top light heavyweights. This is a very proud Chechen from a long line of battle-hardened fighters.”

Salamov (25-1, 19 KOs) has won six consecutive bouts since the lone defeat of his career, a July 2017 decision loss to Australian contender Damien Hooper on the Jeff Horn-Manny Pacquiao undercard in Brisbane, Australia. He has won five of his last six by knockout and has made three defenses of the WBO International light heavyweight title he won via second-round KO over Denis Liebau. He last fought in September 2019 in Grozny, thrilling the hometown fans with a third-round stoppage over big-punching Ghanaian Emmanuel Danso. He hails from the same region of Russia as promotional stablemate and IBF/WBC light heavyweight world champion Artur Beterbiev.

Salamov has his sights set on the WBO world title, last held by Canelo Alvarez, who vacated the title shortly after dethroning Sergey Kovalev last November.

“Umar is a gentle giant of a young man, an excellent fighter who has only begun to tap his immense potential,” said Top Rank chairman Bob Arum. “With Kevin Barry in his corner, he is in great hands. The light heavyweight division is on fire, and Umar is ready to add his name to the championship mix.”