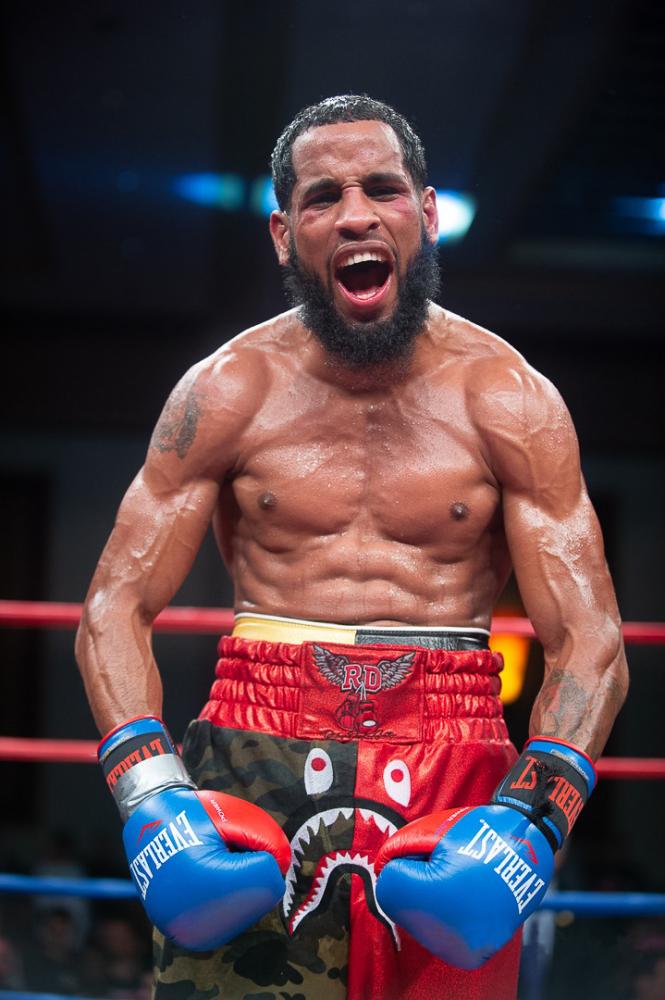 UNDEFEATED FEATHERWEIGHT PROSPECT Ricky Delossantos, seen here celebrating following a win over Yeuri Andujar in August, puts his perfect record on the line next Thursday in a special showdown against undefeated Texan Edward Vazquez at the Twin River Casino Hotel on March 12. The event is headlined by the long-awaited return of Providence super featherweight Toka Kahn Clay.

Next week’s event features the return of Providence native Toka Kahn Clary (27-2, 18 KOs) in his first fight in his home state since 2017, plus a highly-anticipated battle of undefeated featherweight prospects as Ricky Delossantos (9-0, 1 KO) of Pawtucket, RI, faces his toughest test to date in an eight-round showdown against 24-year-old Fort Worth, TX, native Edward Vazquez (7-0, 1 KO).

Tickets start at $47 and are available online at CESBoxing.com and ShowClix.com, or by phone at 401.724-2253. Doors open at 6 p.m. ET with the first bout at 7. An official press conference to announce the event will be held Wednesday, March 4 at 4 p.m. at Skyline at Waterplace, located at 1 Finance Way, Providence, RI.

One of Rhode Island’s most accomplished fighters, Kahn Clary makes his fourth appearance with CES Boxing and first since 2016. The wildly-popular southpaw super featherweight moved to the United States from his native Liberia at the age of 6, the same year he was orphaned following the tragic death of his father. Kahn Clary ultimately landed in Rhode Island and, under the guidance of head trainer Peter Manfredo, developed into one of the state’s most accomplished amateurs, winning 111 fights and a National Golden Gloves Championship before competing in the 2011 U.S. Olympic Trials in Mobile, AL.

As a pro, Kahn Clary rose quickly to the top of the featherweight division with victories in each of his 19 fights, including 12 by knockout. Reunited with Manfredo, Kahn Clary returns to the ring March 12 for his first since August after capturing the then vacant NABA Super Featherweight Title. He will headline in an eight-round bout in search of his third consecutive win and ninth in his last 10 bouts.

In what may be the most exciting bout on the card, Delossantos puts his unbeaten record on the line against “Kid” Vazquez, who amassed an amateur record of 82-8 and advanced to the Junior Olympic semifinals before launching his pro career in 2016 under the guidance of Roy Jones Jr. Promotions. Vazquez’s most impressive victory was in January of 2019 when he upended previously unbeaten California prospect Brandon Cruz by split decision. He began boxing at 8 years old

A late bloomer by most standards, the 30-year-old Delossantos made his pro debut at 27, but has made up for lost time with an impressive string of victories over the past three years, highlighted by his dominant win over Yeuri Andujar in August and a unanimous decision victory over Javar Jones in February of 2019.

The undercard features other noteworthy bouts, including perhaps another showstopper between Massachusetts rivals Ray Oliveira Jr. (8-3, 1 KO) of New Bedford and Springfield’s Derrick Whitley Jr. (6-1-1), who face one another in a special six-round welterweight attraction.

Both fighters are household names among regional fight fans and come from impressive bloodlines. Oliveira, the son of New England icon and former world-title challenger “Sucra” Ray Oliveira, won his first seven fights under the guidance of CES Boxing and makes his first Twin River appearance since 2018. Whitley, the son of “Double Impact” Derrick Whitley, a veteran of 52 pro fights, and the nephew of Derrick’s twin brother Darren Whitley, who fought 44 times as a pro, makes his just second appearance at Twin River and first since dominating Carlos Galindo for his fourth career win in 2018.

Another fight threatening to steal the show is a six-round welterweight battle between Marqus Bates (7-3, 5 KOs) of Taunton, MA and crafty Culpeper, VA, vet Roque Zapata, who returns to Twin River following a back-and-forth showdown with Bates’ stablemate Victor Reynoso in November. Bates looks to get back in the win column following an upset loss to Evincii Dixon last summer, but still boasts five wins in his last six fights, including four in a row against New England rivals Mohamad Allam, Carlos Hernandez, Jair Ramos and Wilfredo Pagan, establishing himself as one of the top 140- to 147-pounders in the northeast.

Next Thursday’s card also features the professional debut of Pawtucket super middleweight Hassler Chacon in a four-round bout against Brazilian Raush Manfio of Florida in addition to the return of East Providence, RI, native and decorated amateur Elijah Peixoto (2-0, 1 KO) in his third professional bout as he faces Philadelphia native Zaymar Brothers (0-1-1) in a four-round super lightweight bout. The 24-year-old Peixoto won four Southern New England Golden Gloves titles as an amateur and amassed an impressive 119-27 record that also included a trip to the 2018 U.S. Olympic Trials qualifiers.