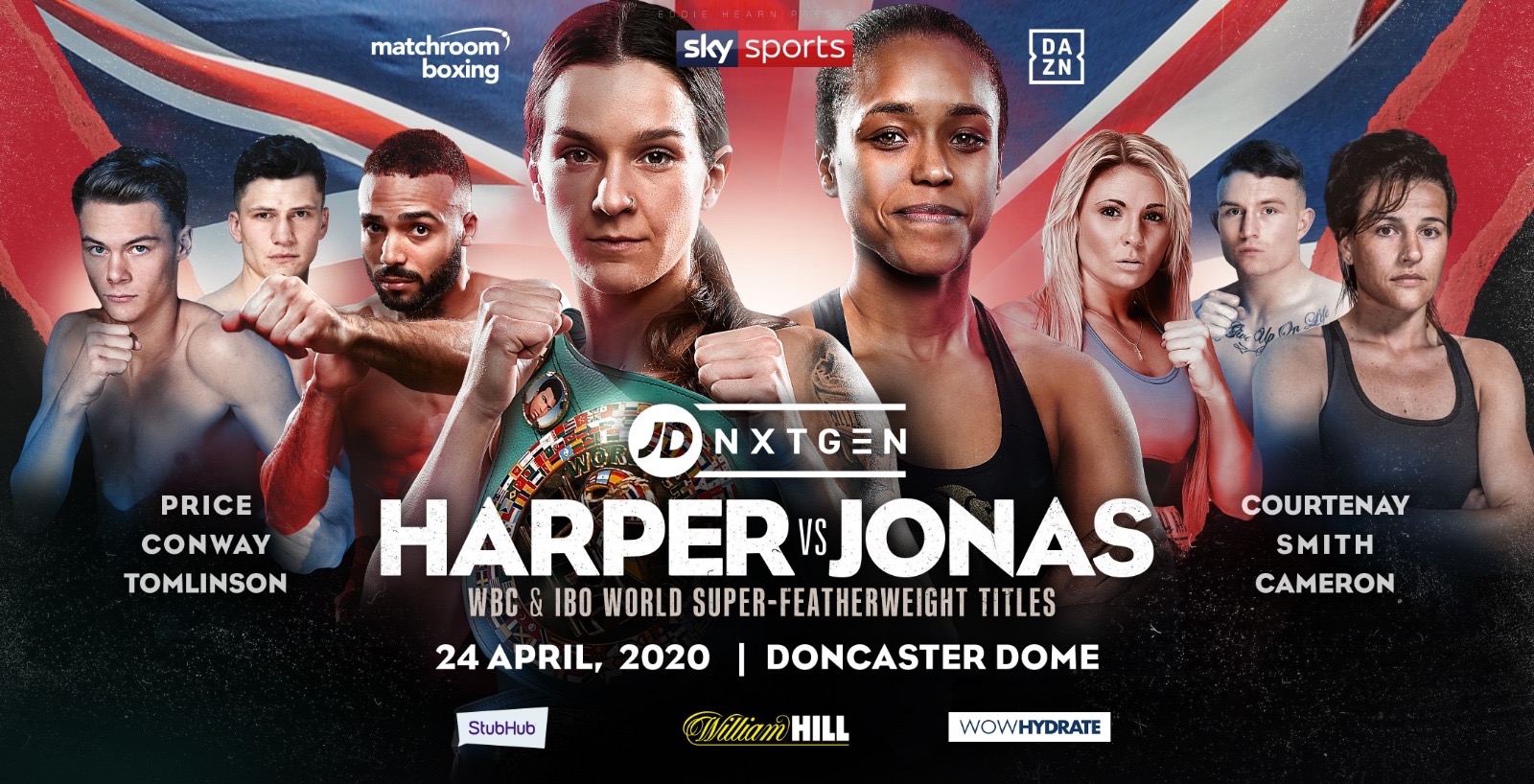 Terri Harper will make the first defense of her WBC Super-Featherweight World Title in an all-British showdown with Natasha Jonas at the Doncaster Dome in the latest instalment of the JD NXTGEN series on Friday April 24, live on Sky Sports in the UK and DAZN in the US.

Harper (10-0, 5 KOs) created history at the FlyDSA Arena in Sheffield last month as she dethroned long-reigning World Champion Eva Wahlstrom to become the first British woman to win a WBC World Title and in doing so the Denaby native announced herself as a new star of British boxing.

Jonas (9-1, 7 KOs), Great Britain’s first ever Olympic female boxer, bounced back from her sole career loss against Viviane Obenauf in 2018 with three wins in a row over Feriche Mashauri, Bec Connolly and Bianka Majlath, and the World Amateur Bronze Medallist is out to cause an upset on away territory.

“We’re not waiting around and I’m excited to go back to the Doncaster Dome where I made my professional debut,” said Harper. “It’s going to be a bit special making the first defense of my WBC World Title in front of my hometown fans in Doncaster – I’m looking forward to the reception that I’m going to receive.

“Natasha had the loss against Viviane Obenauf but we’re not overlooking her because one loss doesn’t define you as a boxer. She’s going to come and try and get the win so we’ve got to train really hard for this and be prepared for the best Natasha.

“There’s a bit of pressure on me as I’ve just won the WBC belt and I don’t want to lose it on my first defence. I’m going to train like I haven’t even won it yet. I haven’t had much time to sit back and think about it all, it’s been very hectic but it’s time to get back to the serious training next week.

“Hopefully we can start looking at other World Titles after April 24, but I just want to keep on enjoying what I’m doing, getting the wins, getting the experience under my belt and pushing forwards. I want to be fighting the best girls out there and challenging myself.”

“From what I’ve seen, Terri is young, fit and hungry,” said Jonas. “She’s explosive and quick and I rate her skill-wise as a boxer. I just obviously think I’m better!

“I’m not going to give away any game plan and I’m sure she thinks she’s seen weaknesses in me too, but I won’t really talk about her weaknesses – it’s more about my strengths. If I enforce what I’m best at then what she’s good at won’t be relevant.

“This means everything. I got back into the professional side of boxing because I think there were things I didn’t achieve as an amateur that I wanted to. I’m trying to do so as a pro so I can say I’m happy with what I did. It’ll be tough. It always is. This is a tough sport. I just think I can do it. It’ll be a dream come true.”

“Terri continues her amazing success story, returning to her hometown as a World Champion after defeating Eva Wahlstrom in front of the Sky Sports cameras on an emotional evening in Sheffield.

“I watched Natasha’s enthralling encounter with Katie Taylor at the London 2012 Games, an electric atmosphere, and she will be determined to display her class in the biggest bout of her professional career. It’s another fantastic addition to our Saturday night schedule as we showcase some of Britain’s best boxing talent.”