Rivas-Devin Vargas heavyweight showdown and the rest of the undercard to stream on ESPN+ beginning at 6:30 p.m. ET 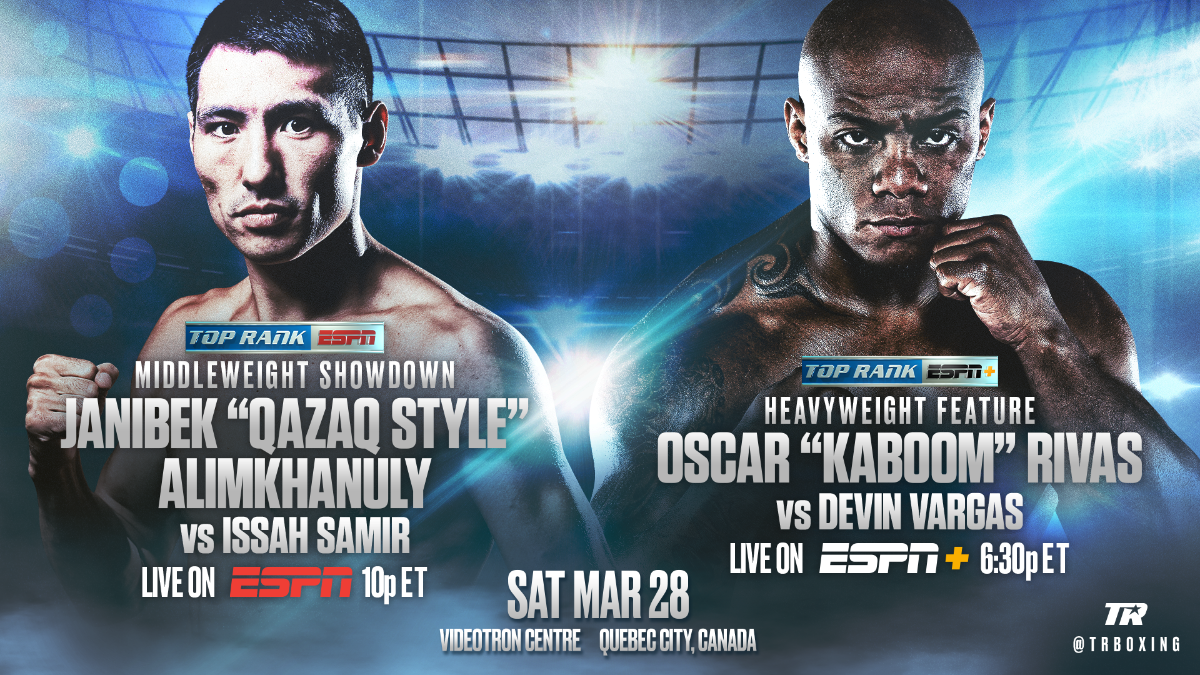 QUEBEC CITY, Canada (March 5, 2020) — Janibek Alimkhanuly will bring his brand of “Qazaq Style” north of the border. Alimkhanuly, the latest middleweight sensation from Kazakhstan, will defend his WBO Global and WBC Continental Americas belts in a 10-rounder against fellow unbeaten Issah Samir on Saturday, March 28 at Videotron Centre in Quebec City, Canada.

The undercard (ESPN+, 7 p.m. ET) will see the return of heavyweight contender Oscar “Kaboom” Rivas in a 10-rounder against 2004 U.S. Olympian Devin Vargas. Rivas, from Colombia, has made Montreal his home since turning pro in 2009.

“What an undercard we have in Quebec City, as Janibek is truly one of the special young talents in the entire sport,” said Top Rank chairman Bob Arum. “Oscar Rivas is a dangerous freight train of a heavyweight, and he is in the mix to fight for a world title in 2020. It is going to be an action-packed evening.”

Alimkhanuly (8-0, 4 KOs), who is trained by Buddy McGirt and managed by three-time BWAA Manager of the Year Egis Klimas, represented Kazakhstan at the 2016 Rio Olympics and captured gold at both the 2013 Asian and World Championships. Ranked No. 4 by the WBO, Alimkhanuly took the express lane to contention, besting veteran spoiler Vaughn Alexander in only his fourth pro fight. He went 4-0 with three knockouts in 2019, including a sixth-round knockout over former Canadian and NABO middleweight champion Albert Onolunose last November in Fresno, Calif.

“I only want the toughest competition. That’s why I am a contender after eight pro fights,” Alimkhanuly said. “This is a great opportunity to showcase my skills live on ESPN. I will leave Canada with the ‘0’ on my record. I want to thank Samir for taking the fight, but he won’t be able to solve the ‘Qazaq Style’ puzzle.”

Samir (18-0, 15 KOs) is the latest world-class pugilist from Accra, Ghana, a proud fighting city that has produced world champions Azumah Nelson, Ike Quartey, David Kotey, Joshua Clottey and Richard Commey, among many others. He represented Ghana at the 2008 Beijing Olympics and turned pro in 2011, knocking out eight opponents in his first year in the paid ranks. Samir won the Ghanaian middleweight title over veteran Philip Kotey in 2015 and, following a nearly three-year layoff, he returned to action in June 2018. He is 4-0 with three knockouts since then and will be making his first professional appearance away from his homeland.

“I am coming to Canada to steal the show,” Samir said. “Every time I enter the ring, I fight for Ghana and our great champions who paved the way. Janibek is skilled fighter, but I know he has not fought anyone like me.”

Rivas (26-1, 18 KOs), who recently signed a co-promotional deal with Top Rank, had an action-packed 2019. He knocked out former world title challenger Bryant Jennings in January and knocked down — and nearly knocked out — Dillian Whyte in July before dropping a unanimous decision for the WBC interim heavyweight world title. Ranked No. 3 by the WBC, Rivas is still in the thick of the heavyweight mix despite the Whyte loss. Vargas (22-6, 9 KOs) revitalized his career in January with an upset victory over 2004 Puerto Rican Olympian Victor Bisbal. Last August, he knocked out then-unbeaten Irish prospect Niall Kennedy in five rounds.

“The past year, I have proven I am one of the world’s elite heavyweights,” Rivas said. “This year, my goal is to prove that I deserve my chance to take on the best heavyweight boxer in the world, Tyson Fury, who is also under contract with Top Rank. On March 28, I will smash my opponent with a spectacular ‘Kaboom.’”

Use the hashtag #BeterbievMeng to join the conversation on social media.