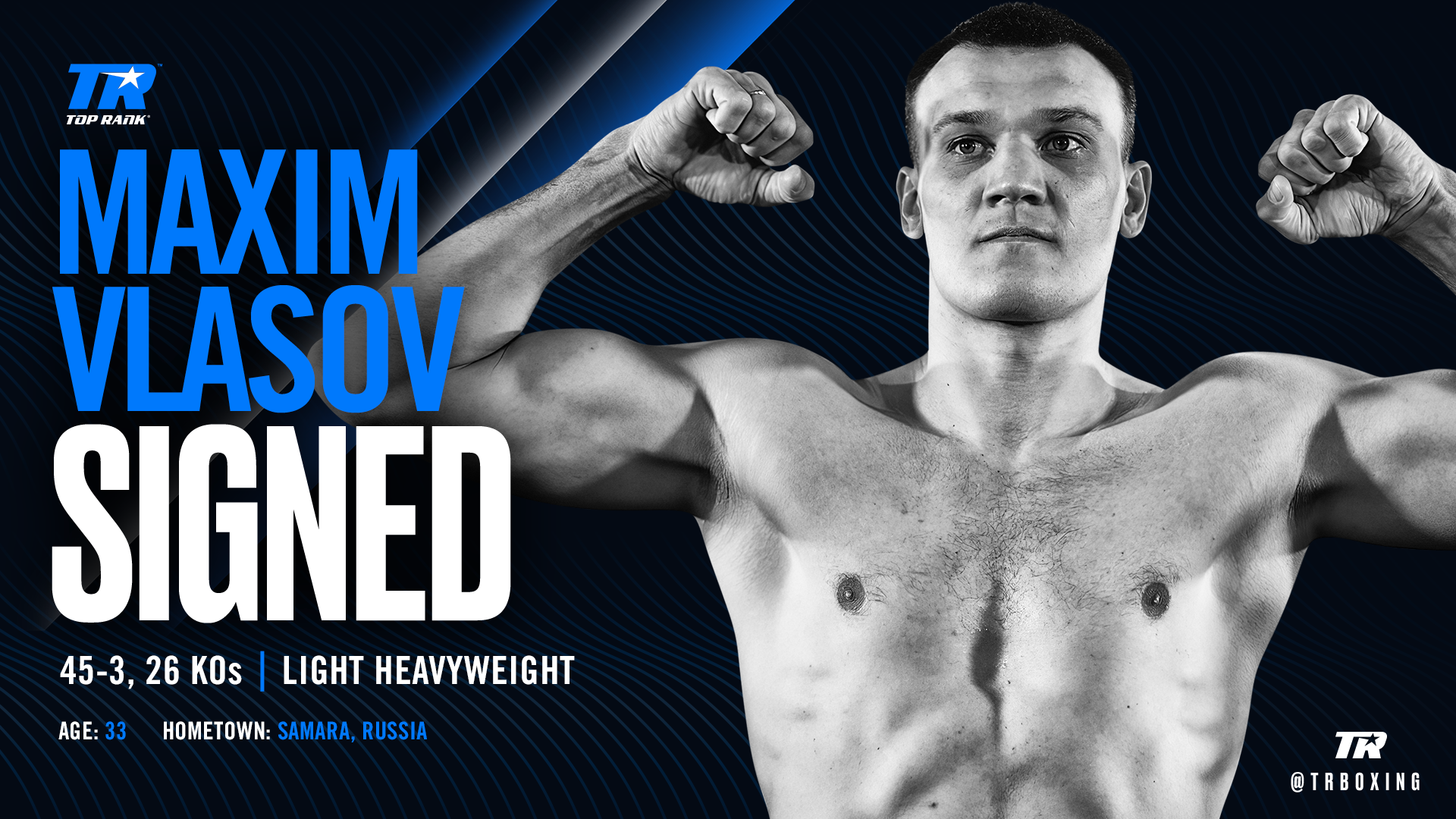 Vlasov will return this summer against countryman Umar Salamov as part of the four-man WBO light heavyweight tournament, which will determine a new world champion. Joe Smith Jr. and former light heavyweight world champion Eleider “Storm” Alvarez will face off in the other WBO semifinal. With Vlasov’s signing, all four men in the tournament have promotional ties to Top Rank.

“Maxim deserves the opportunity to compete at the highest level, and we are thrilled to add him to our deep light heavyweight stable,” said Top Rank chairman Bob Arum. “His fight against Salamov is one that I can’t wait to see.”

“I want to thank Mr. Bob Arum for believing in me and signing me to a long-term promotional agreement. I am very excited to be part of the four-way tournament for the vacant WBO light heavyweight world title,” Vlasov said. “Having fought professionally for 15 years in three different weight divisions against some of the world’s top fighters, I now believe that I am at the top of my game. I am ready to prove to the light heavyweight division that I have what it takes to become the WBO world champion.”

“It is very exciting for Maxim and our team to have signed a promotional agreement with Top Rank. The backing and support from a world leader in the boxing industry will give Maxim the exposure globally that he needs to become a star,” said Oleg Bogdanov, Vlasov’s manager. “He is a real dark horse that has experience against world-class fighters in three weight classes.”

Vlasov (45-3, 26 KOs) had a brief 35-bout amateur stint and turned pro in April 2005 at the age of 18. He won the first 19 bouts of his career before dropping a 10-round decision to perennial light heavyweight contender Isaac Chilemba, whom he knocked down twice in the eighth round. In 2015, following a decision loss Gilberto “Zurdo” Ramirez, he moved up to cruiserweight. He won his first 12 bouts at cruiserweight, including a 2016 knockout over 2008 Olympic gold medalist Rakhim Chakhkiev and a 10th-round stoppage over hard-punching veteran Olanrewaju Durodola in February 2018.

Following a close decision defeat to Krzysztof Glowacki in November 2018 for the interim WBO cruiserweight world title, Vlasov moved down to light heavyweight. He has won three straight since, including a decision over Chilemba. He last fought Nov. 30 in Russia, where he shut out the previously unbeaten Emmanuel Martey over 10 rounds.