On This Day: Top Rank Boxing Debuted on ESPN 40 Years Ago 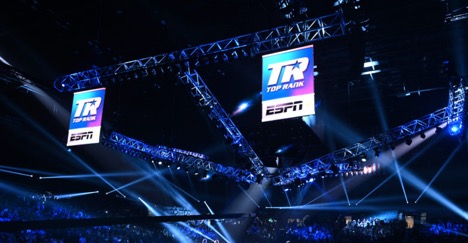 “Top Rank Boxing” crisscrossed the country, partnering with an array of promoters who had hungry, fan-friendly fighters with devoted fan bases in venues such as Ice World in Totowa, N.J., and Showboat Sports Pavilion in Las Vegas. When the series ended in 1996, “Top Rank Boxing” was the longest-running weekly televised boxing series in history.

Said Top Rank chairman Bob Arum: “I can’t believe it’s been 40 years. At that point, networks like ABC and CBS were airing fights in the afternoons, but because they paid so much, they aired many of the top championship fights. ‘Top Rank Boxing’ on ESPN was an invaluable outlet for up-and-coming fighters. Any great fighter that started to emerge in the mid- 1980s and 1990s all appeared, without exception, on ESPN. They all got their start on ESPN, and that’s something we are very proud of.

“Live boxing content was instrumental in helping ESPN become the powerhouse it is today.”