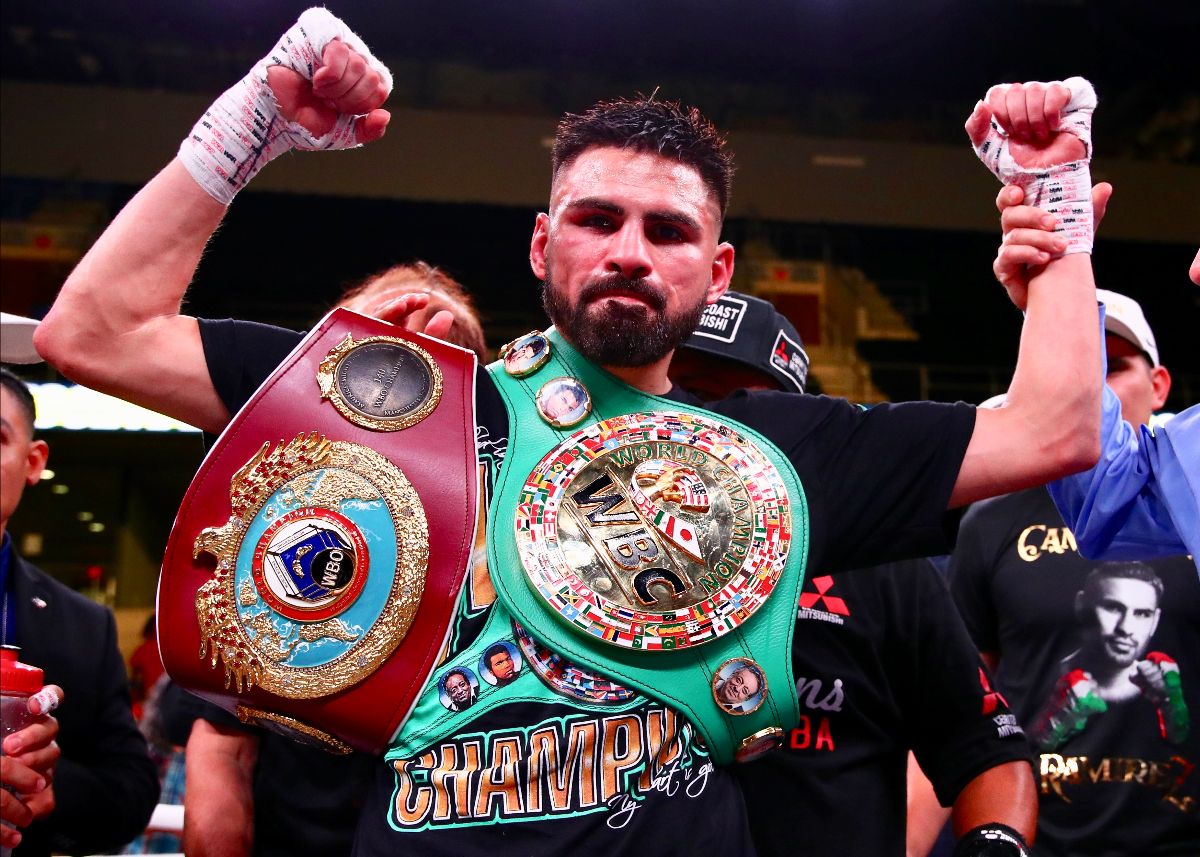 (April 13, 2020) — WBC/WBO super lightweight world champion Jose Ramirez is staying ready. The 2012 U.S. Olympian has not fought since knocking out Maurice Hooker last July in a title unification bout. He was supposed to fight Viktor Postol Feb. 2 in China (Feb. 1 prime time in the U.S.), but it became the first major bout to be impacted by COVID-19. The May 9 makeup date in Fresno also fell by the wayside.

Ramirez is self-quarantining with his family in California’s Central Valley, but he is awaiting the call for the third — and hopefully final — Postol fight date.

He recently spoke with Top Rank’s Crystina Poncher. This is what he had to say.

CP: How have you dealt with the COVID-19 pandemic?

JR: “Obviously it’s the second time my fight gets postponed. There’s a lot of frustration there because of the sacrifices we go through. I’ve been training for the same fight since November. I trained through the holidays, which is always difficult.

“Me having my boy, I want to spend as much time with him now that he’s getting older by the second. It’s hard. I had a plan for 2020, just like any other fighter. I had a plan to fight three times. I was happy that I was going to start early and hopefully move to the {welterweight} division next year. It throws me off. It sets me back. Everything happens for a reason, I believe. Right now, we just have to stay safe. We have to go through this crisis.”

CP: How do you keep yourself from feeling defeated after going through two training camps {without a fight}?

JR: “I’m just staying focused. I’m staying optimistic with everything, with doctors, with everyone, the first responders. I think everyone is working hard to get together to go through this fast and get everything back to normal. Right now, I believe this is something that requires everyone to be on the same page, to really practice {self-isolation} so we can stop the spread of this virus.

“I do know that my fight will be one of the first fights back when all this is over.”

CP: Once the Postol fight is rescheduled, would you like to try and stay at 140 pounds and get more belts or is a move up to 147 imminent?

JR: “I owe it to myself to fight for all the belts just because if I were to go up to the next weight class, people will still doubt who the best 140-pounder is, just because there is another guy with two belts (WBA/IBF world champion Josh Taylor}. There are some other fighters that I didn’t get to face at 140. I really want to prove a lot of people wrong. I want to do it for myself. I know I can be the best 140 in the world. I know I can see myself with all four belts. It’s just a matter of time, and once I do that, I think that’s going to put my name more out there worldwide. It’s going to definitely make a stronger impact when I do move to 147 knowing that the undisputed champion at 140 is moving up to 147. I think that’s going to make more noise.”

JR: “I’ll take any route that leads me to fight for a world title. Crawford is an excellent fighter, so yeah, I would definitely be honored to share the ring with him. I think I’ll show him something new. I think I’ll bring something out of him. By the time I do make that decision to move to 147 and put that extra muscle on me, on my body, I’ll be a much stronger Jose Ramirez. I can see myself developing into a better welterweight than super lightweight. I do have the height. I do have the body frame. I think once I put the extra seven pounds on, it’s going to be a huge difference in a very positive way.

“After Crawford, I plan to stay in the welterweight division for quite a while, definitely fight all the top names out there and see how I do. I think I have what it takes to stay at this level of competition for a long time.”

CP: Would you ever be up for a fight with Regis Prograis down the line?

JR: “Definitely. I think if the fight with Regis takes place, it might take place at 147, though, because I have (super lightweight} fights lined up. I really want to move up after that.”