Emanuel Navarrete Looks Ahead to Future at 122 and 126 Pounds 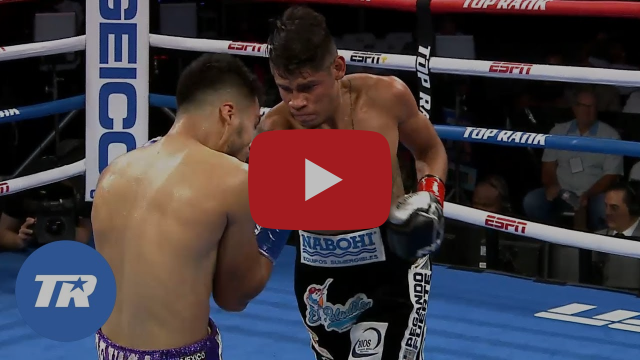 (April 20, 2020) — WBO junior featherweight king Emanuel Navarrete is the world’s busiest world champion, a 25-year-old pressure fighter who is proud to represent his Mexican heritage at the sport’s highest level. From May 2019 to February 2020, when he knocked out Jeo Santisima on the Deontay Wilder-Tyson Fury II card, he defended his world title five times.

The activity kept him sharp and in the spotlight, but with the COVID-19 pandemic and the recovery process from an injured right had, Navarrete is taking a breather.

From his home in Mexico, the “Mexican Iron Man” recently spoke with Lupe Contreras. This is what he had to say.

On dealing with the COVID-19 pandemic

“This is really complicated for me. Like you just mentioned, I’m constantly working and fighting, and all of a sudden, the pandemic arrives, and we had to put the brakes on because I was used to fighting every two months. Right now, I would’ve been in the hardest stage of my preparation for my next bout, but we are dealing with the pandemic. I haven’t let it affect me that much because I fought like 15 to 20 days before the pandemic started, but the way I was fighting, it was going to be complicated to stay as active. Like I said, at this moment I would’ve been in the final stage of my preparation, and it’s just not that way. Right now, everything is very calm. I’ve installed a few machines just to have a gym at home. I’m maintaining my conditioning, so I can be ready whenever we get back to the ring. I’ll be ready to face any fighter.”

On fighting underneath the Wilder-Fury II main event

“It was a dream come true for me. It was always one of my goals to fight in an event that big. I still think that I could be the co-main event to an event like that, but taking into consideration that I only have been champion for a year, and I’ve already been part of such a big event as Wilder vs. Fury II, I think it puts me in a great position in boxing. I feel happy because, like I said, one of my goals was to fight in an event like that, and I did after just a year as champion. That was iconic. I feel happy because that was my fifth title defense, and I did it on a PPV. That was personally a special moment in my journey as champion. We feel very proud, happy and satisfied of what we have represented in my time as a champion.”

On the status of his injured right hand

“Look, the truth is I couldn’t perform at 100 percent like I’m used to. I couldn’t perform as well, but thanks to God, everything came out well. We did the work. We won the fight. I believe that chasing the knockout, even in that condition, it personally gave me the confidence. Maybe I thought that I couldn’t do it, but I did it. The recovery was a little bit complicated because going to therapy and being in recovery, I don’t like it that much. It’s tough because I rarely get injured, but this time I got injured, and it was a little bit more severe because I had to go to therapy. It was complicated.

“Look, I really didn’t have anything scheduled, but even if I had something, I would’ve declined any event after the fight because of the injury. This is something that is a priority because I depend on my hands to keep on boxing and to perform well the way I’ve been doing it. There is no point in going into a fight while I’m injured. That’s why I would’ve declined to fight in any event after my last fight.”

On his confidence as a world champion

“I knew that obviously we work hard for certain things and certain goals. The moment that Bob Arum mentioned I felt like one of the stars in boxing or one of the most important champs in boxing… because representing my country on such an iconic date and in Las Vegas, it’s something a lot of people can’t say that they have done. When they gave me the opportunity to do it, it helped me a lot with my confidence because I knew that they were trusting me, that they wanted to see me for a reason. It gave me confidence because I have always thought that I must put on a good show for the people. They are the ones that choose who are the stars.”

On his rapid rise through the boxing ranks

“I believe that we have done a lot of good things in a short amount of time. I see it that way. The fans are used to watching me fight because I’ve been fighting constantly. I did five title defenses in nine months. That’s fighting every month and a half or every two months at the most. Seeing me fight constantly created that connection and love with the fans. That’s what I think. Also, I have said it, and I keep saying it because it takes me a lot. There are times that I have the fight figured out, and it becomes easy for me to get the victory. I could cruise like we say in boxing, but I’m always going for the knockout. Always! It doesn’t matter if my hands are hurt. It hasn’t happened yet, but even if I suffer a cut, or talking negatively, having my worst moment in a fight, I would still be looking to drop my opponent and go for the knockout. I believe the fans appreciate that even if I could cruise to get a victory, I always try to knock out my opponents.”

On the support from the fans and his promoters

“I’ve always wanted to unify titles, and you have seen that I’ve never declined any fight. I have always tried to make the unification fights happen. They haven’t happened, but it’s not because I don’t want them, or that I don’t have the interest, or that I couldn’t do them. It really is because there are a lot of things in between. And I’m OK with that because I have looked for those fights. If the unification fights haven’t happened, it’s because the other parties don’t want them. The other sides have never reached out to me, and there has never being any interest on their part.”

“If we get through this {pandemic} quickly, and there is interest from the Japanese fighter (Naoya Inoue), I believe it will be easier to make a fight with him than with any other fighter at 122. But it’s like I just mentioned. There is no interest from their part. He really did what he wanted at 118 and then he sent out a release saying that he was going to move up to 122, my division. When he did it, I saw the possibility of fighting him because he signed with Top Rank, but after that, he said he was going to face Johnriel Casimero. They were supposed to face each other in April. I don’t know if it will happen, but if it happens, it will have to be right after we get through the pandemic. It would have to happen right away because the truth is that I’m seriously thinking of moving up to 126, and the only thing that could keep me at 122 would be a big fight against Inoue or a possible unification against one of the champions. That is the reality of why I would stay around at 122. If it’s not that way, I will move up to 126.”