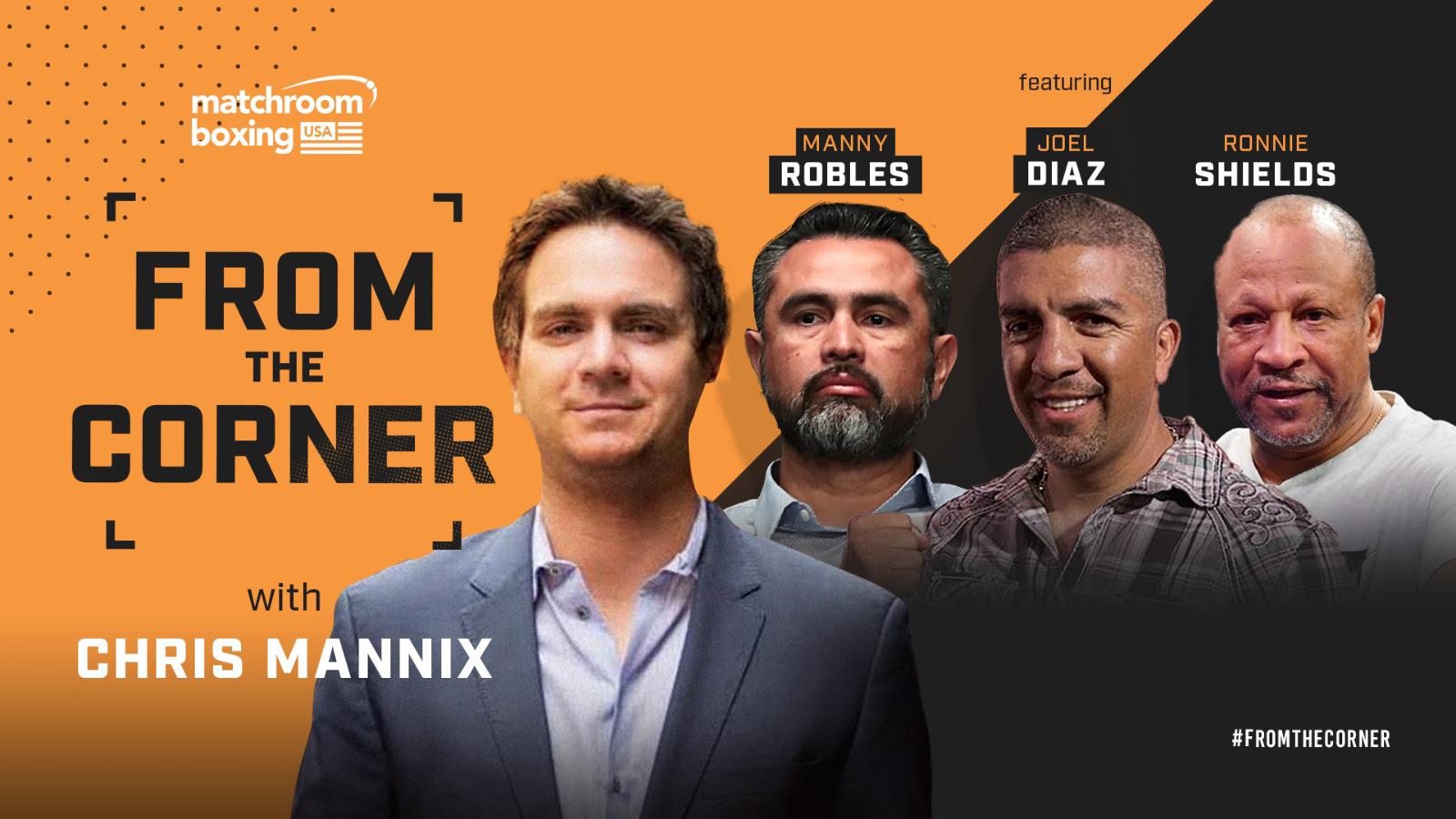 STAR TRAINERS ROBLES, DIAZ AND SHIELDS VIEW THE PANDEMIC ‘FROM THE CORNER’
Three of boxing’s best corner-men join Chris Mannix to discuss how boxing will emerge from the lock-down and more

Star trainers Manny Robles, Joel Diaz and Ronnie Shields join Chris Mannix in the latest episode of Matchroom Boxing’s YouTube show with trainers viewing the sport and the COVID-19 pandemic ‘From The Corner’.

WATCH ROBLES, DIAZ AND SHIELDS TALK ALL THINGS BOXING WITH CHRIS MANNIX ON ‘FROM THE CORNER’ ON MATCHROOM BOXING’S YOUTUBE CHANNEL NOW!

All three trainers have bustling stables of elite fighters and rising stars, and they are eagerly waiting for the go-ahead to prime their fighters to return with a bang, but first, Robles was asked about his old charge, former World Heavyweight champion Andy Ruiz.

Robles: I’ve never had to depend on one boxer, I have a good stable of fighters and I’m lucky to be able to do what I do which is coach and be in boxing. I wish Andy nothing but the best, I understand he’s now training with Eddy Reynoso, I think that’s a good choice for Andy.

Bottom line is that it’s down to the fighter and he’s got to want it. Again, it’s down to accountability – fighters have to hold themselves accountable. We as coaches get them ready, train them and prepare them mentally and physically but if the fighter isn’t there what can you do? A fighter has to want it, and Andy has everything to get back into title contention again.

I said before the June fight with Anthony Joshua that he had what it took to be champion when no-one believed me, and I wasn’t wrong. Unfortunately, after June 1 everything changed, he was a different person overnight.

Robles: How else will you get ready for a fight without sparring? It’s impossible. We have to rely on each other to be responsible, that everyone is staying safe and taking the necessary precautions and don’t end up getting sick. That’s all we can really do, hold yourself accountable and be responsible.

I’m working with four or five guys right now and I spread their training out. I’ve got other fighters that I communicate with and see how they are holding up and everyone is eager to get back to fighting.

Diaz: You can improvise sparring with mitt work. You have to simulate the opponent that you are coming up against with the mitts. My guys are together in the camp house and as a trainer, not only am I training them, but I am reminding them that they can only go home and go to the gym and the supermarket, wash their hands and wear their masks. My boys have been sparring because they have been living together, so that’s not a problem for the guys I have here, but I have no dates, no fights.

On fighting without fans:

Diaz: We’re going through a pandemic and we have to make adjustments. Every fighter has probably boxed on an undercard with no fans at one point, I’ve had fighters box at 1 am in front of one guy and the cleaners! I’ve heard from fighters recently say, ‘I don’t want to fight if there’s no fans’ but then hear fighters say, ‘I don’t care about the fans, boxing is my source of income, I need to bring the bread home!’

Do you want the fans, or do you want to bring food to the table? Based on the situation we are in; boxing is my source of income. People were sort of stuck watching UFC because there was a nothing else on and the ratings were high because everyone was watching. The fighters have to prepare mentally to do the same and say, ‘I am going to go to work’ and perform, or do you need the cheers of the crowd to hype you up?

Robles: Fighters will fight anywhere in the world; you just have to adapt. This is what we do, it shouldn’t come as a shock, it’s just being able to adapt to the circumstances.

Shields: We’re going to have to come back without fans, and it’s not going to be much different really, it’ll be like being in the gym. A lot of times in the gym you only have a few people watching you spar, so it’ll be a bit like that, but it’s the real deal. You have to prepare yourself mentally, but once you get in there, it’s not going to make a difference if you have a crowd or not, because that guy in front of you is trying to knock your head off and you have to concentrate on what’s in front of you and not what is in the audience.

On remote judging and corners:

Robles: It’s a complicated situation, I think the judges have to be there live, they aren’t close to the fighters. There are certain things that you can’t change. I got a call to say that there may only be two in the corner – coach and cutman – it’s difficult for two to do the corner, you need at least three and maybe four.

Shields: There’s no way it can happen. Suppose the internet goes, or the electricity goes? Anything can happen. Judges have a hard job as it is doing it live. They have to be there.

Diaz: I’m not with that. You see a different fight on TV or on a monitor than you do watching it live.

On Jermall Charlo vs. Demetrius Andrade

Shields: It’s not up to me, I don’t pick fights. That comes from the management, they strategize on who this and that guy is going to fight, then they come to me. To build a guy to become a World champion is one of the hardest things to do, and once they get there, you want to make sure that they get the best fights available to them. Our main goal now is Canelo, like everyone in the division, he’s the best and he brings the money. I like Demetrius, he’s a good fighter, but it’s not up to me to make the fights.

I spoke to Jermall and he said he just wants to get back to his sport and he’s anxious to go. These guys are ready. Jermall has a gym at his house but it gets boring when you are just doing a workout by yourself. He doesn’t care about not having fans there, he just wants to defend his title and he doesn’t want to sit out too much longer.