Both shows will air LIVE on ESPN & ESPN Deportes starting at 8 p.m. ET 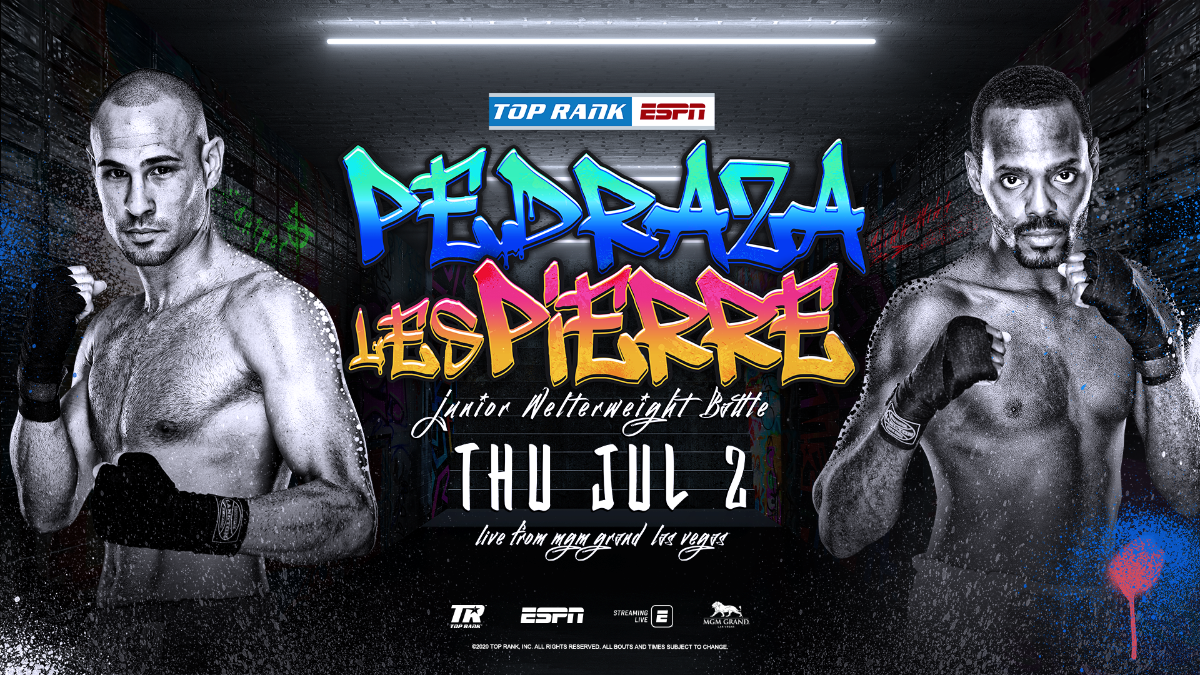 LAS VEGAS (June 24, 2020) —Jose Pedraza and Mikkel LesPierre will give it another shot. The junior welterweights will face off in the 10-round main event Thursday, July 2 from the MGM Grand Conference Center—Grand Ballroom. Pedraza-LesPierre was originally scheduled for June 18, but the bout was postponed after LesPierre’s manager tested positive for COVID-19.

Week 4 of the Top Rank on ESPN summer series begins Tuesday, June 30 at the MGM Grand, when top junior welterweight contender Alex Saucedo faces Sonny Fredrickson in a 10-round showdown.

The Pedraza-LesPierre and Saucedo-Fredrickson cards will air on ESPN and ESPN Deportes beginning at 8 p.m. ET/5 p.m. PT.

“Mikkel and Jose deserve this opportunity, and I commend both camps for agreeing to reschedule this fight on short notice,” said Top Rank chairman Bob Arum. “Alex Saucedo is destined to be a world champion, but he has an incredibly tall task in Sonny Fredrickson. We have another great week in store at MGM Grand.”

Saucedo has fought only once — a first-round knockout over Rod Salka — since he was knocked out by Maurice Hooker in November 2018 in a bid for the WBO junior welterweight world title. The Oklahoma City product is entering his second fight with head trainer Pedro Neme and will move closer to a second world title opportunity with a victory over the 6-foot-1 Fredrickson. From Toledo, Ohio, Fredrickson is a former U.S. amateur standout who is hoping to re-establish his momentum following a majority decision defeat to Samuel Teah last November.

“I have gotten a lot of quality sparring during the last few months, and I believe that’s going to show on June 30,” Saucedo said. “We have done 130 rounds in this camp sparring three times a week. We were able to get some taller guys to prepare for what Sonny brings to the table. I’ve worked on the things I need to win this fight. I’m still the same aggressive fighter, but we put a lot more movement in there. I’ve gone back to basics.”

Junior welterweight prospect Josue “The Prodigy” Vargas (16-1, 9 KOs) will seek to increase his winning streak to 11 when he faces the battle-hardened Salvador Briceno (17-5, 11 KOs) in a 10-rounder. Vargas fought four times in 2019, including a win over Noel Murphy that earned him the IBF North American junior welterweight strap. Briceno is 4-2 in his last six fights, including competitive showings in decision losses to unbeaten prospects Gabriel Flores Jr. and Yomar Alamo.

Former U.S. amateur superstar Javier Martinez, from Milwaukee, Wisconsin, will make his professional debut against an opponent to be named in a six-rounder at middleweight. Martinez won the U.S. Olympic Trials at 165 pounds and was ranked number one in the nation at that weight, but after being named an alternate for the Olympic squad, he turned pro with Top Rank and noted manager Tim VanNewhouse.

“I didn’t want to wait around for this fight, so I’m glad we got the deal done,” Pedraza said. “My march toward a junior welterweight world title continues July 2 in Las Vegas.”

“I want to thank Top Rank and DiBella Entertainment for making this fight happen through the trials and tribulations,” LesPierre said. “I’m honored to be the main event on July 2, and I am ready to showcase my talent to the world and prove my world championship caliber.”

Robeisy Ramirez (3-1, 3 KOs) is out for revenge. The two-time Olympic gold medalist from Cuba will fight Adan Gonzales (5-2-2, 2 KOs) in a six-rounder at featherweight. It was Gonzales who shocked the boxing world last August when he spoiled Ramirez’s pro debut with a four-round split decision victory. Ramirez has scored three knockout wins since then, including June 9 at MGM Grand. Gonzales has not fought since the Ramirez fight.

Elvis Rodriguez (6-0-1, 6 KOs), the southpaw sensation from Santo Domingo, Dominican Republic, will seek to register his fifth consecutive knockout in a six-round junior welterweight tilt against Daniel Murray (5-3, 0 KOs). The only blemish on Rodriguez’s record came in this third pro fight, a technical draw following an accidental clash of heads.

Featherweight prospect Luis Melendez (8-1, 6 KOs) will fight an opponent to be named in an eight-round bout.