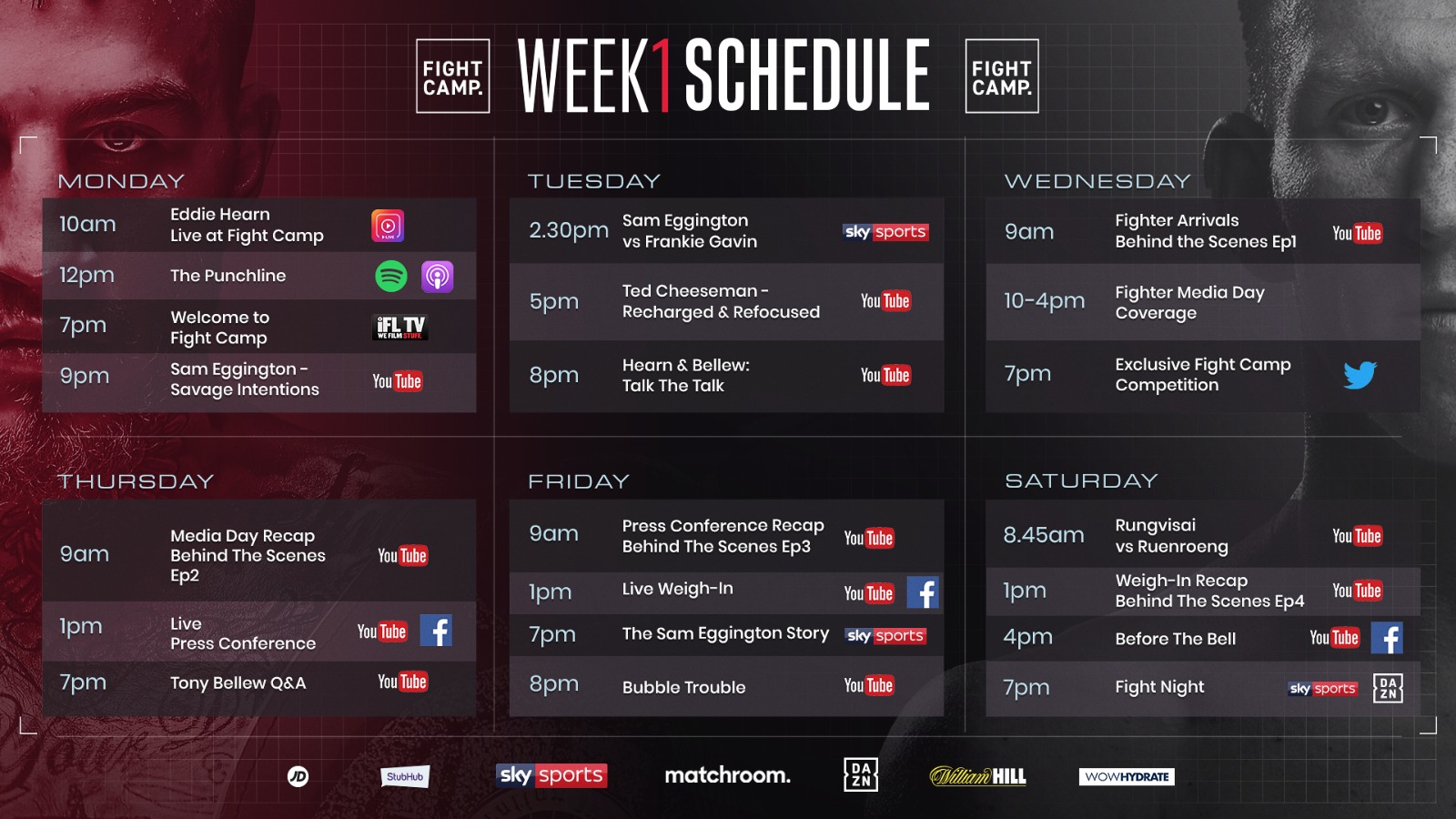 EGGINGTON VS. CHEESEMAN FIGHT WEEK SCHEDULE
All of the build-up content ahead of Fight Camp opening weekend

Ahead of the opening weekend of Matchroom Fight Camp on Saturday August 1 topped by Sam Eggington vs. Ted Cheeseman, shown live on Sky Sports in the UK and DAZN in the US, all media and fans are invited to watch the below schedule of content leading up to the big night.

Promoter Eddie Hearn goes live on Instagram to give fans an exclusive behind the scenes look around Matchroom HQ as work continues on the breathtaking Fight Camp set up.

Matchroom visit Sam Eggington in camp as he prepares to defend his IBF International Super-Welterweight Title against Ted Cheeseman.

Matchroom visit Ted Cheeseman in his Essex training camp as he prepares for his must-win clash against Sam Eggington.

9.00am Fighter Arrivals Behind the Scenes Ep1 (Matchroom Boxing YouTube)

Watch exclusive behind the scenes footage of the fighters and their teams arriving at the official fighter hotel ‘bio bubble’.

Watch exclusive behind the scenes footage as fighters undertake their media obligations.

Presenters Chris Lloyd and Darren Barker bring you all of the action from the official press conferences chaired by promoter Eddie Hearn.

Watch exclusive behind the scenes footage from the official press conferences.

Join presenters Chris Lloyd and Darren Barker as all fighters hit the scales from 1.00pm.

Watch exclusive behind the scenes footage from the official weigh-in.

Presenters Chris Lloyd and Darren Barker are joined by special guests from Matchroom HQ as build-up continues towards the opening bell.

Jordan Gill and Reece Bellotti’s electric Featherweight clash kicks off an unmissable evening of boxing shown live on Sky Sports in the UK and DAZN in the US.

For any questions on the fight week schedule including the Media Day, Press Conferences and Weigh-in please contact Daniel Barnard: