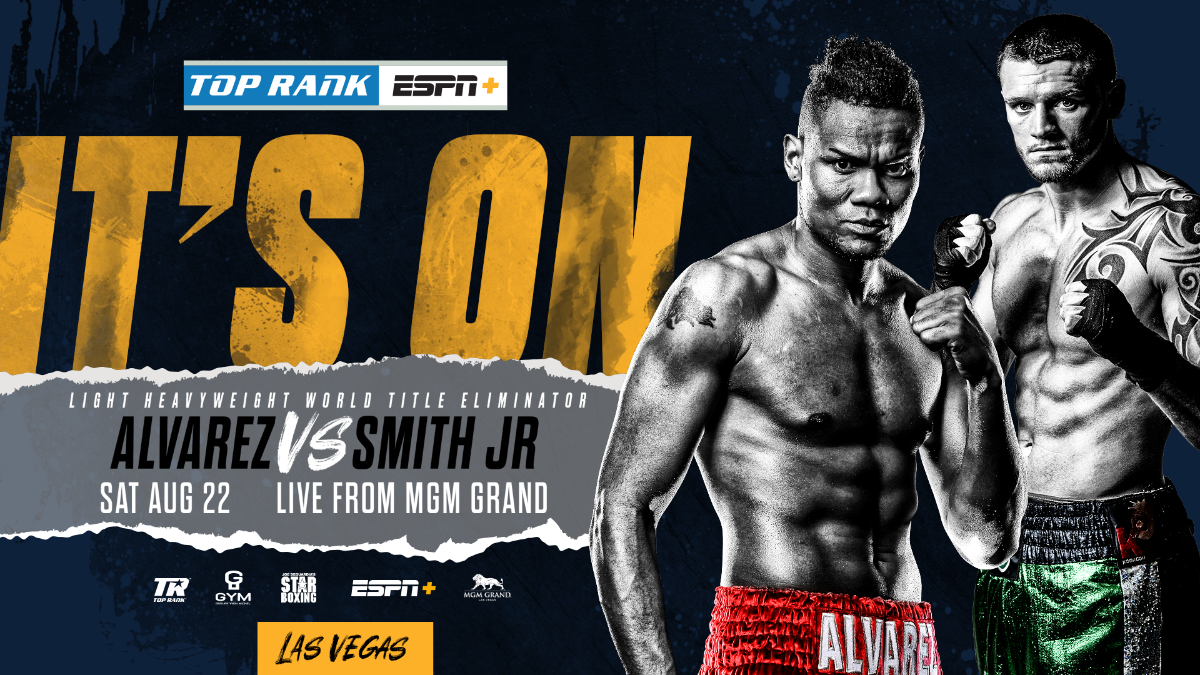 LAS VEGAS (July 30, 2020) — Leave the judges at home because Eleider “Storm” Alvarez and Joe “The Beast” Smith Jr. are coming for the knockout.

Alvarez and Smith will face off in a WBO light heavyweight world title eliminator in Top Rank’s return to the MGM Grand Conference Center Saturday, Aug. 22. Promoted by Top Rank, in association with Joe DeGuardia’s Star Boxing and Groupe Yvon Michel (GYM), Alvarez vs. Smith and a co-feature will stream live on ESPN+ starting at 10 p.m. ET/7 p.m. PT.

“I can’t wait to sit back and watch this fight, which features two of the light heavyweight division’s biggest punchers,” said Top Rank chairman Bob Arum. “It’s a 50-50 fight and a great way to kick off our return to MGM Grand.”

Said Alvarez, “This fight is critical for both of our careers. I respect Joe Smith, who has proven to be an elite fighter. However, I have all the tools to beat him, and that’s what I intend to do. My goal is to become a two-time light heavyweight world champion.”

Said Smith, “This fight means everything to me. It’s my path to a world title fight, and I know this is my second chance to turn my dream into reality. Alvarez is a former world champion, and in my mind, I am treating this as a world title fight. To get there, I have to, and will, win this fight.”

Alvarez (25-1, 13 KOs) is a former Colombian Olympian who has made Montreal his home since turning pro in 2009. He gained widespread recognition following victories over Lucian Bute and Jean Pascal, but his August 2018 knockout win over longtime champion Sergey Kovalev earned him the WBO light heavyweight world title and recognition as one of the world’s top fighters. Alvarez lost a decision to Kovalev in a rematch the following February, but after recovering from a foot injury, he returned stronger than ever. He headlined a Top Rank on ESPN main event January 18 and knocked out Michael Seals with a single right hand. The knockout, an instant viral video sensation, became an early frontrunner for Knockout of the Year.

Smith (25-3, 20 KOs), from Long Island, rose to prominence in 2016 as the construction worker member of the Laborers Local 66 union who knocked out top contender Andrzej Fonfara and living legend Bernard Hopkins in back-to-back fights. He fell short in his only world title shot, a March 2019 decision defeat to WBA champion Dmitry Bivol. The Bivol fight was a minor hiccup, as he returned in January and neutralized Jesse Hart over 10 one-sided rounds in a Top Rank on ESPN main event in Atlantic City. Smith, who now owns and operates a residential tree service company on Long Island, hopes to punch his ticket to another title shot. A win over Alvarez will assure him of that opportunity.

Joe DeGuardia, Smith’s promoter, said, “I just love watching Joe Smith Jr. fight. He is a true throwback, a fan-favorite with tremendous punching power. It will be thrilling to see him against Alvarez, who is one of the top fighters in the game. Not only will boxing fans see two of the toughest light heavyweights battle it out in a fight that will ultimately determine the WBO world champion, but this has all the makings of the Fight of the Year.”