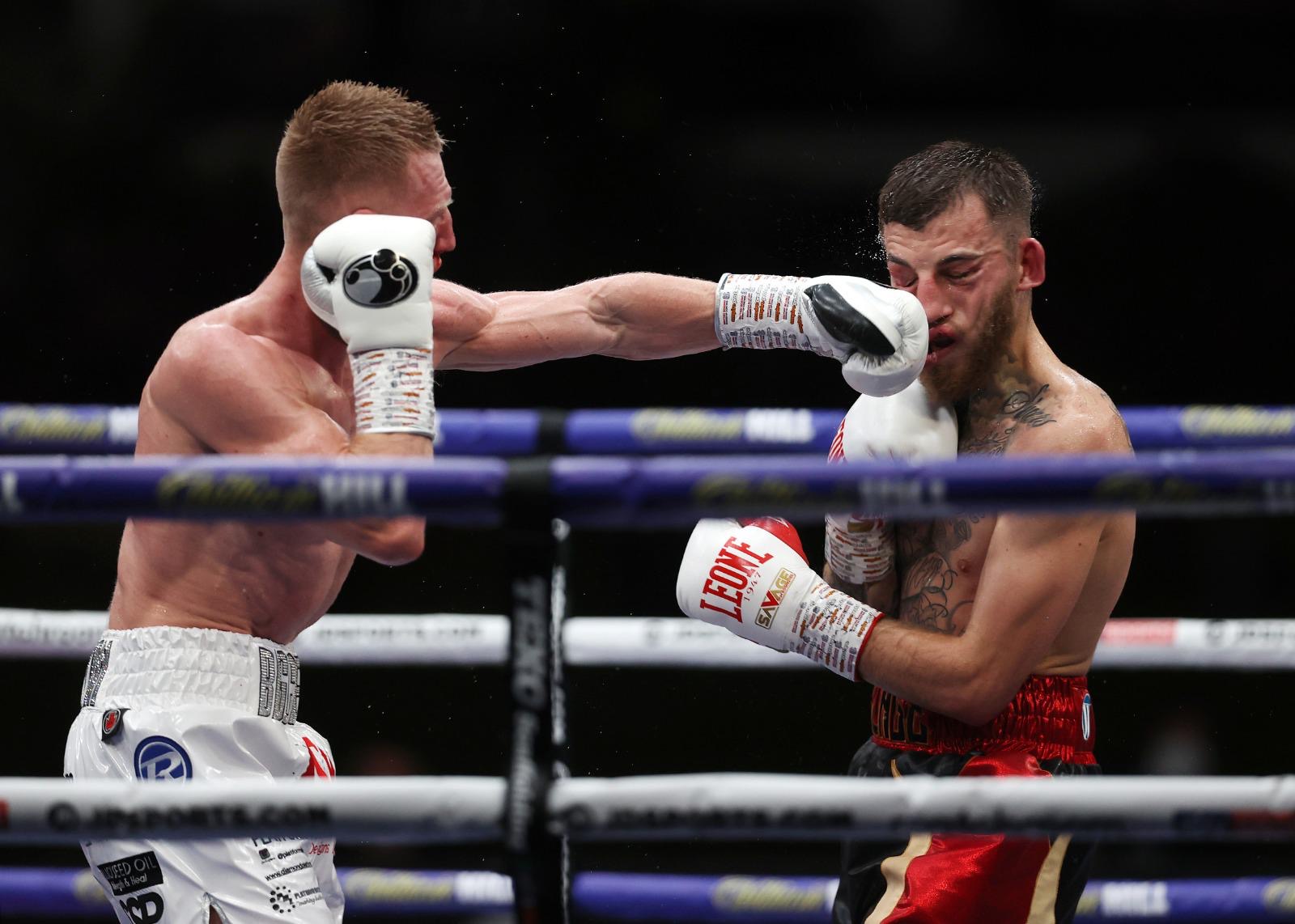 Sam Eggington and Ted Cheeseman served up an unforgettable Fight of the Year contender on a spectacular opening night of Matchroom Fight Camp in Brentwood, Essex, live on Sky Sports in the UK and DAZN in the US.

Bermondsey’s Cheeseman was under immense pressure heading into the fight having been without a win in three fights during a difficult spell, but ‘The Big Cheese’ edged out Eggington in an all-out war with scores of 116-113, 116-113 and 115-114.

After twelve relentless rounds of back and forth action Cheeseman took Eggington’s IBF International Super-Welterweight Title, and along with it a number five ranking with the governing body that could push him towards World Title contention.

After the fight an emotional Cheeseman said: “You can’t imagine. I see fighters lose who don’t care. I cared, I cried my eyes out, I stormed out of the ring. I’m a winner, I gave my heart to this sport and I felt that I deserved some luck last year, but I never got it.

“I lot of people doubted me, thought I would tire. When it got tough, I had a fight with Sam. It was morale – I haven’t won for nearly two years – and you need confidence.

“I was confident going into that ring. There was no pressure with no crowd. I made mistakes but I boxed really well. I could have thought: ‘It isn’t going my way’. But I gave it my all. If I lost tonight, I would have retired. I could cry my eyes out with happiness.”

“You just have to roll with the punches,” said Eggington. “Ted got the decision today. Of course I would like the rematch. I’m sure people would like to see it again.”

‘The Assassin’, who has held Commonwealth and European belts at Super-Featherweight, floored Gwynne with a right hand and then resumed his relentless assault to force the referee’s intervention.

“It means everything,” said Tennyson after the fight. “I stuck to the plan. I was told to be patient, move around, stick to my shots.”

Tennyson’s promoter Eddie Hearn said: “Hats off to Gwynne, massive respect. This is what we want at Fight Camp, thrilling fights. Tennyson always has the equaliser – he has dynamite in his hands especially at 135lbs.”He is so exciting. I want to see him move faster. He’s done at British level. A great fight would be Patera for the European title. I love the Jorge Linares fight. What an entertainer, what a fighter, non-stop action.”

Dillian Whyte’s Heavyweight protégé Fabio Wardley stopped Simon Vallily in three rounds of their highly-anticipated grudge match to pick up the vacant English Title – his first professional belt.The powerful prospect was in the toughest assignment of his nine-fight career but caught Vallily with a big left hook then finished the fight with a flurry of blurring punches.

Wardley, who has been used as a sparring partner by Oleksandr Usyk, was far too athletic for Vallily to handle. When he staggered Vallily with a left hook in the third round, he immediately pounced.

“I started boxing just for a bit of a fun,” Wardley told Sky Sports. “I’m massively humbled and grateful. Near on punch perfect, I think I did pretty well. Round three, that was it, it was over.”

Dalton Smith impressed in the first real test of his professional career by knocking out Liverpool’s Nathan Bennett in the fifth round of their Super-Lightweight clashFormer amateur standout Smith extended his pro record to 6-0, including five stoppages, by flattening Bennett with a massive one-punch KO.

He had threatened to end Bennett’s hopes in the first round but, when his opponent recovered, he bided his time then found an explosive finish later on.

After the fight Smith said: “I think I boxed to instructions, did what my dad said. He caught me with a shot in the first round – and I knew I had to be switched on.”

Jordan Gill’s career is firmly back on track after the skilful Chatteris Featherweight sealed a stylish unanimous decision over Watford’s Reece Bellotti in the opening bout of Fight Camp.

“I thought it was a great fight,” said Gill. “All credit to Reece, he came and brought his A-Game. That’s probably the best Reece Bellotti we’ve seen. He’s taken a lot of experience from his losses and put it into a really good performance. I think he can come back and win titles.

“I expected a better performance from myself, but a win is a win, and I got rid of a lot of demons in there tonight. I boxed to orders, controlling the fight with my left hand.

“I didn’t really let my right hand go. I busted my hand mid-rounds, but no excuses, a great fight, and I’m pleased to come away with the win.”