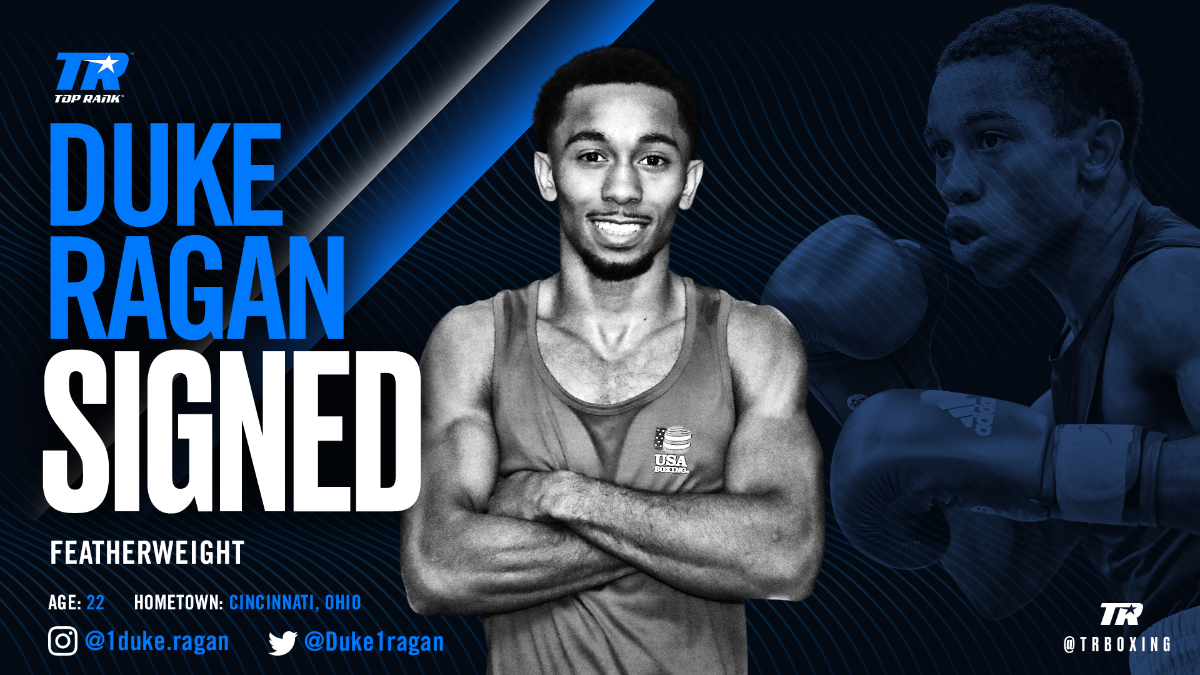 (August 10, 2020) — Duke Ragan, the amateur fighting pride of Cincinnati, has elected to punch for pay. Ragan signed a multi-year professional pact with Top Rank, which will co-promote the 22-year-old with Antonio Leonard Promotions.

Ragan, who captured a silver medal at the 2017 World Championships in Hamburg, Germany, will make his professional debut in a four-round featherweight bout August 22 in Las Vegas on the Eleider Alvarez-Joe Smith Jr. undercard.

“This opportunity means the world to me,” Ragan said. “Since I didn’t go to the Olympics, becoming a world champion is my next goal. My jab, counterpunching ability, and stamina are more suited to the pro game. When I fought with headgear, I was hurting guys but not knocking them out. You’ll see more knockouts from me as a pro.”

Said Bob Arum, Top Rank chairman: “Cincinnati has produced countless great fighters, and we believe Duke Ragan will be the next world champion from the ‘Queen City.’ He is mature beyond his years, and with Kay Koroma, James Prince and Antonio Leonard on his team, he has a wonderful support system.”

Cincinnati is the home of all-time greats Ezzard Charles, Aaron Pryor and Freddie Miller, and Ragan grew up around the city’s recent crop of world-class fighters. His boxing mentor is Rau’Shee Warren, a former bantamweight world champion who made history as the only three-time U.S. boxing Olympian. He sparred in Cincinnati gyms with the likes of Warren, four-weight world champion Adrien Broner, Gervonta Davis and WBO junior lightweight world champion Jamel Herring.

Despite a pair of close losses at the Olympic Trials last December, he still had a path to an Olympic berth. But with the Tokyo Olympics postponed until 2021, Ragan, who has a 3-year-old daughter, decided to get a head start on his professional career.

Said Ragan, “It’s finally my time to shine. I’m proud to be from Cincinnati, and I know bringing home a world championship will put me up there with the top dogs from my city.”