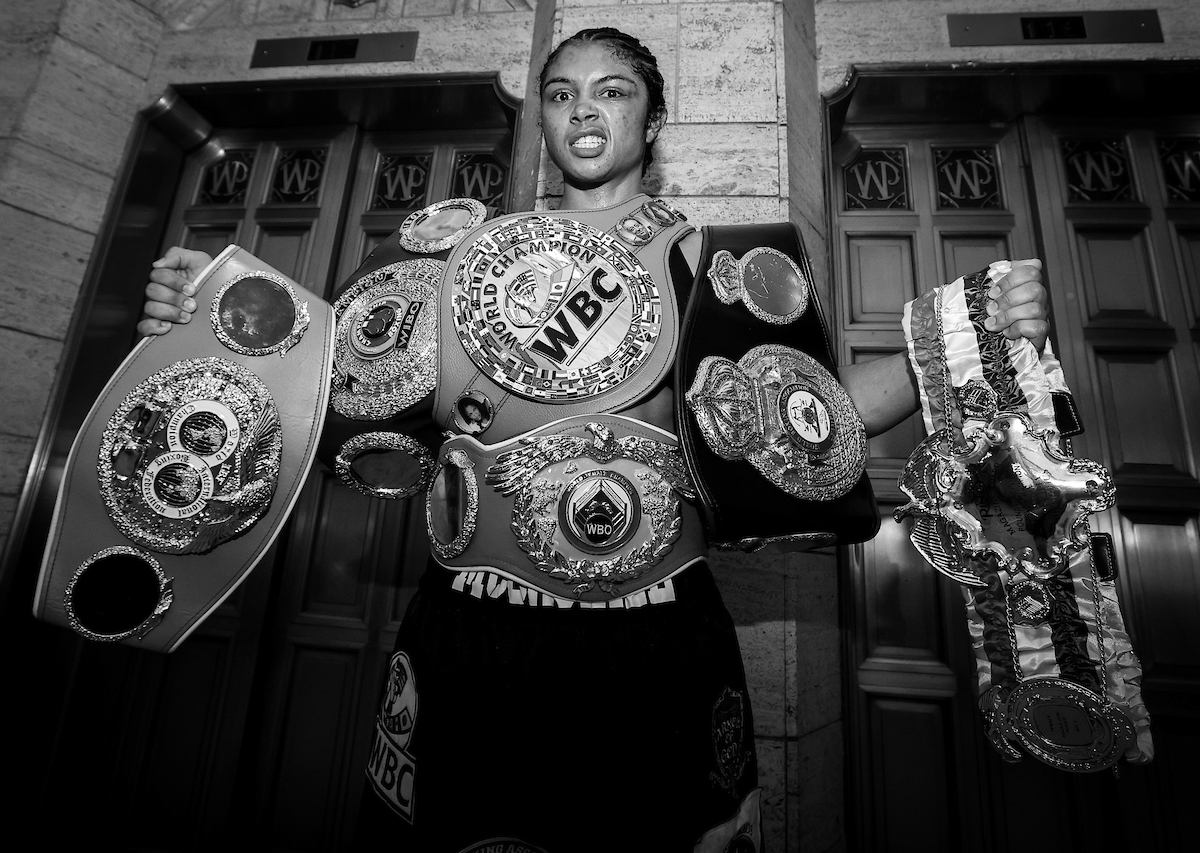 McCaskill (9-2 3 KOs) added another chapter to her incredible story last weekend, ripping the titles from Cecilia Brækhus on the streets of downtown Tulsa, Oklahoma to shatter the Norwegian’s dreams of breaking Joe Louis’ longstanding record of successful World title defenses.

The Chicagoan now stands as a two-weight World ruler after just 11 pro fights, a remarkable feat but one that McCaskill is not ready to settle for.

The 35 year old first dipped her toe at World title level against Taylor in December 2017, pushing the Irish sensation all the way in the first defense of her World Lightweight title, a performance that boosted the confidence of McCaskill and led to her becoming World Super-Lightweight champion the following October and then unifying that division.

McCaskill was ringside in New York when Taylor and Persoon shared a thrilling battle for Taylor’s Lightweight straps in front of a sold-out Madison Square Garden, and while there will be no-one present as Fight Camp comes to a close in the grounds of Matchroom HQ, McCaskill will join millions on the edge of their seats at home as the pair do battle once again.

“I want Katie to win,” said McCaskill. “Katie is one of the biggest fights for me outside of a Cecilia rematch. We just have to go to the drawing board and figure it out. I hope to fight before the end of the year, but we have to see how Katie gets out of this fight. If she’s cut or anything like that it will take longer with suspensions but I’d love to fight before the end of the year. I am already back in the gym so I am staying ready.

“I almost knocked Katie out with a left hook. I felt that I was on the world class level and I proved it. If Katie had lost that fight to me, I don’t think Eddie would have kept pouring money into women’s boxing the way he has. He was so invested in Katie and he still is. So I am OK with the outcome. We have both led successful career paths from there and I think there should be a rematch.

“Something like Wembley Stadium where there are 100,000 fans, if that’s even possible in the times that we are in right now, then of course that is something we wouldn’t pass up. Our preference is to have the fight in the states since the first fight was in the U.K. This one should probably in the U.S.

“Sometimes with boxing, they wait too long and the opportunity is gone for one reason or another. I don’t think waiting is the answer. If we don’t have fans, we don’t have fans. We will both experience with fighting without fans now. I don’t think it will be an issue. I love my fans and I’d love to have them there with me but then again, I think everyone has DAZN by now.

“I was at the first fight in New York. I think it was a really close fight, I thought it was going to be a draw. Katie had the belts, I didn’t think they’d give it to Delfine. I know Delfine is aggressive. Katie wanted to prove something and she came out with the win but that probably wasn’t the smartest plan because she has all the tools to beat her.”

McCaskill certainly had the tools to beat Brækhus last weekend, and reflecting on that fight, and on the anniversary of her pro debut five years ago tomorrow, McCaskill expects to face the former champion in a rematch later this year.

“I think Cecilia will come back for the rematch,” said McCaskill. “In two weeks or so, I think she will realize that you can’t take the fight out of a fighter and she will want to try to get these belts back. She had them for so long and I think that hunger will be there.

“I could tell at the stare down that her breathing was uneven, and she seemed off. She seemed nervous. I don’t know, maybe she had a tough weight cut or something, but I could read her energy was off in the bubble.

“It was an ugly fight, but I knew I had to give it my all and take it to her. I thought she was going to jab and move a lot more. We had practiced a lot more for both of those. But then in the first minute, she started to dive in, and I knew that was exactly what I wanted so I increased my output. When it comes to punch count, I just have a high work rate, so I am not just trying to outwork her, I am just trying to keep my own work rate high.

“This win broadens my fan base massively. It puts me at a level that people will learn my name. If I’m not a household name now, I hope to become one. I hope my trainer gets ‘Trainer of the Year.’ I came into work on Monday, I checked some emails. That’s just in me to have a certain work rate. At some point, we might sit down with Matchroom so I can step away from my day job to focus more on boxing and these world title fights.

“Every fight from here on out is for a belt. We can’t move backward. You can’t demand top-notch when you are giving low quality. The females need to learn the business side of boxing and keep pushing for the biggest and best fights.”