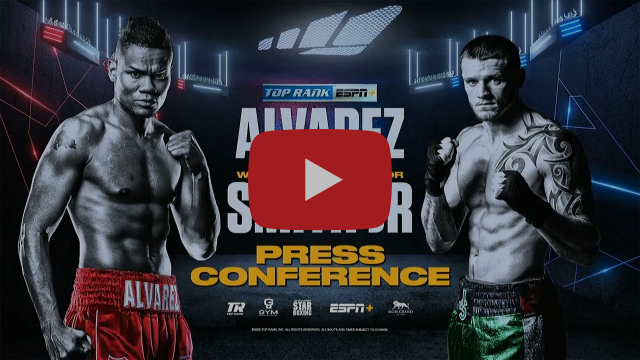 Smith and Alvarez face off at final press conference

This is what two of the division’s heaviest hitters had to say.

“I feel 100 percent. I feel no pain since the recovery {from an injured shoulder}, so I feel great.

“{The Michael Seals knockout} was my first fight in 11 months, so I’m happy to be back. I want to put on a good performance. I felt that with the performance against Seals, I tried. I would’ve been happy with a decision. I was trying different things, but I got the knockout.

“It was hard for all the boxers, especially in the first two months to train, because everything was closed. We had to adapt to that. Now, things seem to be getting a little more back to normal. The gym is open. It’s not what it was. Hopefully, the pandemic can be over, and we can get back to normal. There were challenges, but we had them like every other fighter.

“Being the underdog, I always feel like I have something to prove. I don’t mind it. I like getting in there and proving the world that I belong at the top and should be a champion.

“The {first-round knockout} over Fonfara, I was like a 20-1 underdog in that fight. I came out and definitely shocked the world with that knockout. It got me here. It got me all the fights and the opportunities that I’ve gotten since. It all led up to this, and this one’s the big one. I’m really excited to be here and looking forward to getting another shot at a title.

“Same thing with Jesse Hart. I was pretty much the underdog in that fight. He was talking a lot, and I just kept it cool. I went in there and did what I had to do, and I got the win. That’s what I gotta keep doing.

“This is the number one priority right now for me. I’m just focused on getting this win Saturday night, so I trained very hard. I’m well prepared. As far as the tree business is going {Smith and his father own and operate Team Smith Tree Service on Long Island}, it’s definitely doing well. Due to the storms, we picked up some work. It was a little slow for some time because of the COVID 19, but it definitely has picked up. My father’s out there every day. He’s doing all the estimates. He’s running the business. I just pop in here and there. I haven’t been doing much with the business. I’ve just been focused on this.

“The only thing, this guy over here is trying to stop me from accomplishing the goal that I have set for myself.

“I’m just going to get in there and give it my all. I plan on coming out on top. I just want to put on a great show for everybody and have a great night.”