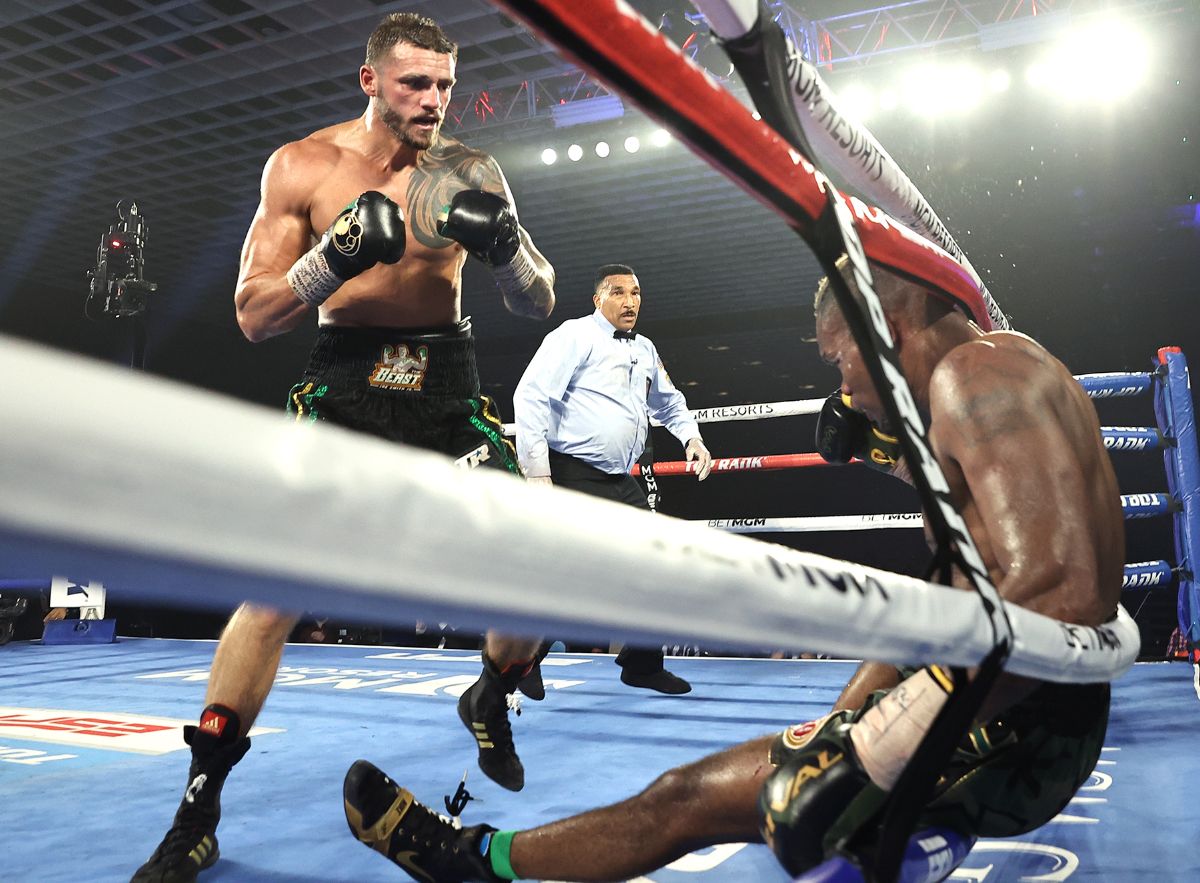 • CLICK HERE for PHOTOS
(Photo Credit: Mikey Williams/Top Rank)
LAS VEGAS (August 22, 2020) — Joe “The Beast” Smith Jr. once again lived up to his moniker. The Long Island native, nearly four years since he knocked Bernard Hopkins through the ropes, knocked out Eleider “Storm” Alvarez in the ninth round of a WBO light heavyweight world title eliminator.

A right-left combination sent Alvarez (25-2, 13 KOs) through the ropes, and he could not beat the count.

Smith said, “Coming into this camp, I knew I had to work on my boxing. I wanted to be sharp, throw a lot of straight punches. I watched his fight with {Sergey} Kovalev, and Kovalev kind of set the way to beat him. So we watched that and worked off of it. I knew coming in today I had to box a little more because he’s got that great right hand. He caught me with it a couple times, but I can take a punch, too.

“Every time he hit me, I wanted to come and stop him in his tracks, and I did that. I stuck to my game plan, and it was a great fight.

“I feel this one is a big one. I really needed it. I wanted to prove I’m not just a knockout guy. I proved my boxing ability, too, and I showed that tonight.”

Former middleweight world champion Rob “Bravo” Brant returned from a layoff of more than a year to knock out Vitaliy Kopylenko (28-3, 16 KOs), who remained on his still following the conclusion of the fifth round. Brant (26-2, 18 KOs) suffered a torn biceps in training late last year, which came off the heels of his shocking knockout loss to Ryota Murata in July 2019.

This was Brant’s first fight with head trainer Brian McIntyre.

Brant said, “My punch output was high, but I felt like I threw a lot of quality shots, especially with a veteran like Vitaliy. I’m not going to try and pronounce his last name out of respect, but he’s a crafty veteran. He’s been around for a long time.

“I spent a lot of time in camp with them. It’s been a three-month camp with them. Between the advice they have given me and being around Terence Crawford and Jamel Herring, it teaches you to relax a little more.”

— Julian “Hammer Hands” Rodriguez (20-0, 13 KOs) notched the most significant win of his career, knocking out the previously undefeated Anthony Laureano (13-1, 4 KOs) in the opening round of a scheduled 10-round junior welterweight bout.

Rodriguez returned in 2019 from a shoulder injury, which kept him out of action for nearly two years.

“Previous to the shoulder injury, I was more of a brawler,” Rodriguez said. “I was coming in with bigger shots, but once I noticed the arm wasn’t holding up in that way, it forced me to focus more on my footwork, using my jab, and more of a different style. Now I feel like I have all the tools.”

— The Clay Collard train continues to roll on. The one-time UFC fighter improved to 5-0 on the year with a second-round TKO over Maurice Williams (7-2, 3 KOs). Collard (9-2-3, 4 KOs) started the year with three wins over previously undefeated prospects and has now won two in a row by knockout. Boxing’s newest folk hero is making his case to be the 2020 Prospect of the Year.

“I’m just a fighter. I like getting out there as often as possible and entertaining the fans. I appreciate all the love and support from the fans, and I enjoy putting on a show for them,” Collard said. “Listen, I’ll fight as often as possible. I love fighting on these Top Rank shows, and I look forward to the next one. This has been quite the ride.”

— Featherweight Duke Ragan’s professional debut was flawless, as the Cincinnati native knocked out Luis Alvarado (1-2) with a single right hand in the opening round. Alvarado rose to this feet, but he was in no position to continue, and referee Jay Nady stopped the contest.

— Bantamweight prospect Robert “Biggie” Rodriguez (9-0-1, 5 KOs) made quick work of Abel Soriano (10-1, 7 KOs), dropping the Nebraska native three times before referee Russell Mora called off the bout at 2:59 of the opening round.