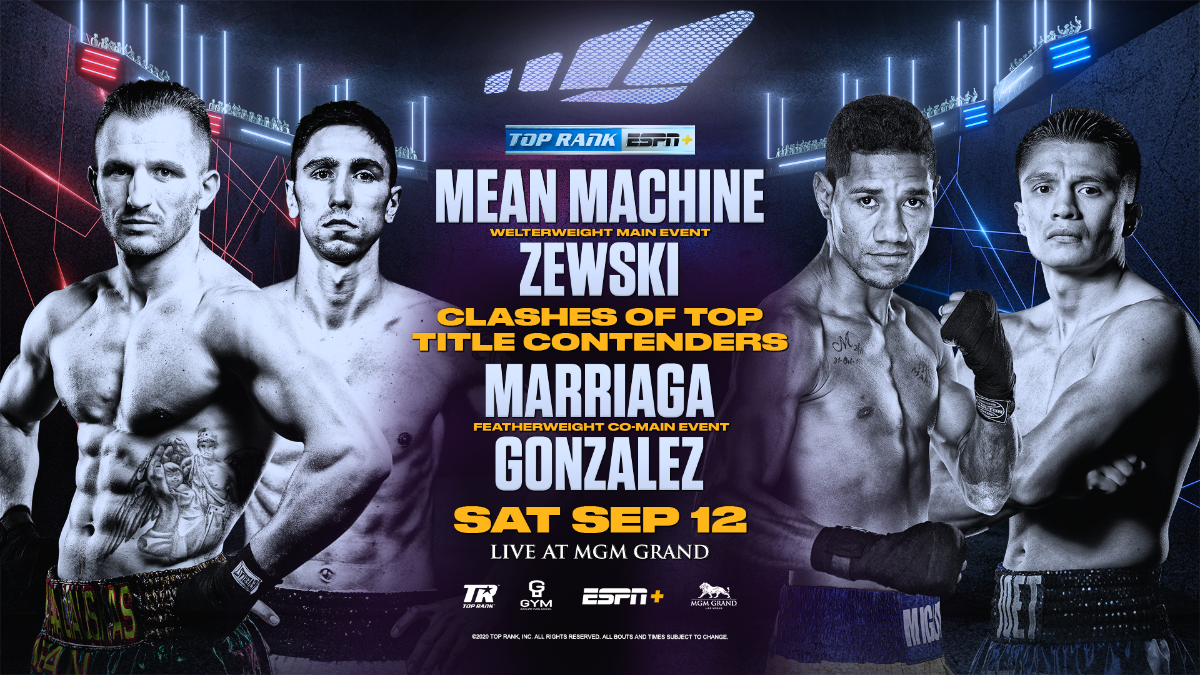 “Mean Machine proved he’s a top welterweight with his performance against Terence Crawford. He’s itching to get back into championship contention, and Zewski should give him a tough challenge,” said Top Rank chairman Bob Arum. “Viewers will get a high-energy, action-packed fight with the Marriaga-Gonzalez bout.”

Kavaliauskas (21-1-1, 17 KOs) is a seven-year pro who earned a mandatory shot at Crawford with wins over the world-rated David Avanesyan, Juan Carlos Abreu and the previously unbeaten Roberto Arriaza. The Crawford bout headlined the post-Heisman Trophy ceremony telecast on ESPN last December, and Kavaliauskas was competitive with the pound-for-pound great until a pair of knockdowns ended things in the ninth round. He is still ranked in the Top 15 by the WBO and WBC and hopes a win over Zewski (34-1, 23 KOs) moves him closer to a second world title opportunity. Zewski, from Trois-Rivières, Quebec, Canada, is 8-0 with 3 KOs since a 2015 decision loss to Konstantin Ponomarev in Las Vegas.

Kavaliauskas said, “I am excited to return to the ring, as I still have unfinished business. I still believe I have what it takes to become a world champion, and that journey resumes against a tough opponent in Mikael Zewski.”

Zewski said, “This is the fight I’ve been waiting for. Kavaliauskas is a fast and extremely powerful boxer, but I have all the tools to win. The stakes are high, and a win will propel me into a world championship fight. This is my ninth fight in Las Vegas. I’ll feel right at home.”

Marriaga (29-3, 25 KOs) is itching to return after his July 16 ESPN main event was canceled when Mark John Yap missed weight by nearly nine pounds. The Colombian slugger has won four in a row by knockout since challenging Vasiliy Lomachenko for a junior lightweight world title in August 2017. Gonzalez (23-1, 14 KOs) last fought in October 2019, dropping a unanimous decision to Shakur Stevenson for the vacant WBO featherweight world title. With Stevenson having vacated the title to campaign at junior lightweight, Gonzalez’s path to a second world title shot goes through Marriaga.

Marriaga said, “I was disappointed after what happened with Yap, but Joet Gonzalez always comes to fight. It’s going to be a toe-to-toe battle. I believe my experience and power will be the difference. I will not underestimate him, as I must win to move forward in my career.”

Gonzalez said, “It’s a real privilege to be coming back at this time. I want to thank my manager, Frank Espinoza, and my promoter, Golden Boy, for making this possible. Marriaga is a very tough fighter. He’s been in the ring with Nicholas Walters, Oscar Valdez and Vasiliy Lomachenko, so this will give everyone a good indication of where I stand in the division. I plan to make the most of this opportunity and score a big win so I can show everyone that I deserve to be at the top of the division.”