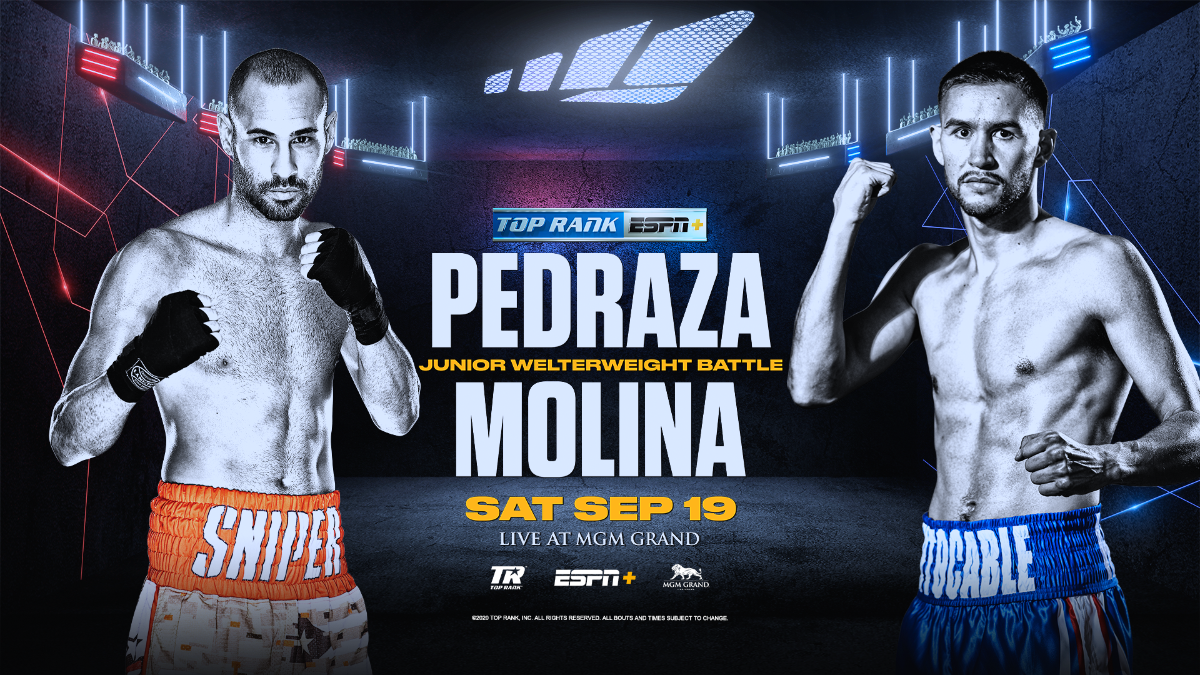 Pedraza-Molina will headline a night of fights live on ESPN+ beginning at 7:30 p.m. ET, with the co-feature set to begin at approximately 10 p.m. ET.

“Pedraza and Molina asked us for a meaningful fight, and we believe the winner is in excellent position for a world title opportunity,” said Top Rank chairman Bob Arum.

Pedraza (27-3, 13 KOs), a former junior lightweight and lightweight world champion, returns to the MGM Grand “Bubble” a little more than two months after he dominated former world title challenger Mikkel LesPierre over 10 rounds. Pedraza had an inauspicious junior welterweight debut when he lost a decision to Jose Zepeda last September, but the LesPierre performance established his place among the division’s top contenders. Molina (22-2, 9 KOs) is 4-0 since signing with Top Rank in early 2019, reviving a career that stalled following a pair of decision defeats. Last November, he knocked out the normally durable Hiroki Okada in 65 seconds. He followed up the Okada KO with an upset victory over Amir Imam in February on the Deontay Wilder-Tyson Fury II undercard.

Pedraza and Molina were scheduled to fight on the Jose Ramirez-Viktor Postol undercard on May 9, but the event was scrapped due to COVID-19. The Ramirez-Postol bout finally happened August 29, and now Pedraza and Molina will headline a show of their own.

Pedraza said, “I’ve been looking for a fight against Javier Molina for a long time. I also had him on my radar because we were supposed to fight earlier this year, but the whole situation with the pandemic changed those plans and the fight was postponed. I kept training hard to keep improving and I ended up fighting against another opponent and had a great performance.

“This fight will bring me even closer to a world title opportunity. My goal is to become a three-division world champion, and Javier Molina will not stop me from achieving my dream.”

Molina said, “Going into this year, I had big expectations for myself. I know what I’m capable of, and I’m here to make a statement against Pedraza. I haven’t received the respect or recognition I feel I deserve but getting a win over Pedraza will put my name out there. It’s a huge opportunity, and I plan on taking advantage of it.”