NEW YORK (September 4, 2020)–It wasn’t a typical weigh-in day for super middleweight DeAndre Ware.  But it wasn’t a a day that out of the ordinary either,

Super Middleweight contender, and Toledo Firefighter DeAndre Ware not only brought his fighting skills to Las Vegas, where he will meet Steven Nelson for Nelson’s NABO Super Middleweight title on Saturday night,at the MGM Grand Conference Center, but he displayed his firefighter and first-aid talents by springing into action and saving the life of longtime Top Rank Event Coordinator Pete Susens.
Approximately 30 minutes before the weigh-in, Ware was meeting with Nevada Commission officials and filling out the customary pre-fight paperwork, when Susens suddenly collapsed.  Eyewitnesses painted a bleak picture as to Susens’ condition.  That’s when Ware jumped into action by performing chest compression’s and revived Susens.
“I’m here for my fight, but I had to put EMS skills to work and do some CPR.  Happy to say the guy was talking a bit, and was alert headed to the hospital. I’m thankful! I feel I saved a life'” Ware posted immediately after on his Twitter account.
Susens was rushed to a nearby hospital where he is responsive and expected to make a full recovery.
Moments later, Ware jumped on the scale and weighed in at the 168 pound limit for Saturday’s showdown.  Nelson checked in at 167.6 lbs.
The bout can be seen live at 10 PM ET on ESPN +.  The undercard begins at 7:30 PM ET.
Ware is managed by Split-T Management. 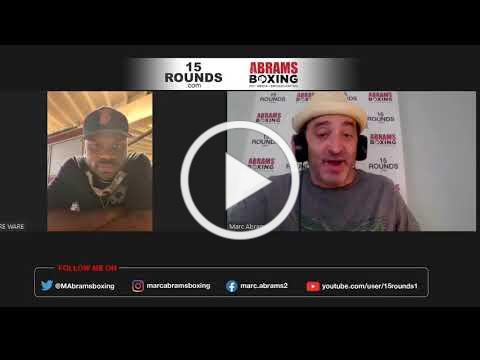