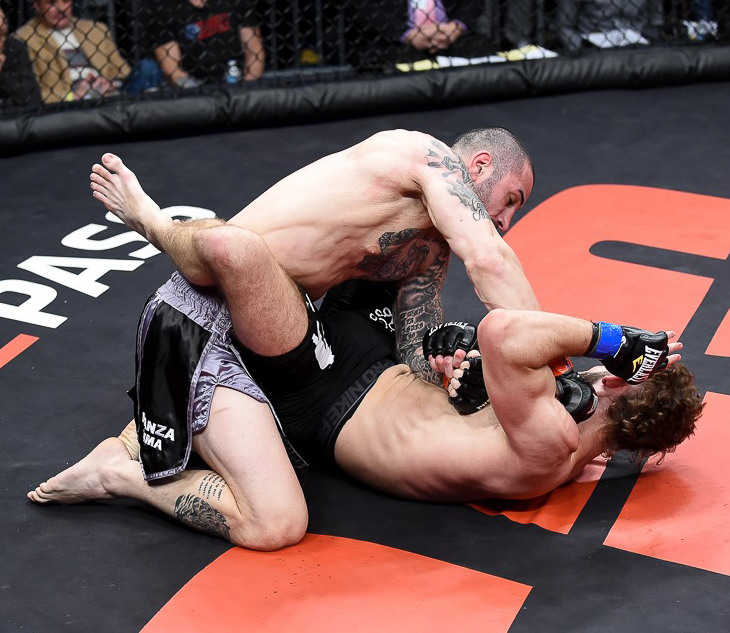 CES photo by Will Paul
UNBEATEN WELTERWEIGHT JOHN Gotti III (above left) is one of several CES MMA veterans highlighting the promotion’s long-awaited return to live action on October 14, 2020. CES MMA 61 is scheduled at “The Tent” at the Crowne Plaza Hotel in Warwick, RI, and will stream live on UFC FIGHT PASS® with no fans in attendance. Due to COVID-19 restrictions, CES MMA has not promoted a live event since January.
FOR IMMEDIATE RELEASE
Thursday, October 1, 2020

CES MMA embraces ‘new normal’ in long-awaited return to live action
PROVIDENCE, RI (October 1, 2020) – A comeback more than six months in the making is about to launch at an arena near you live on UFC FIGHT PASS ®.

CES MMA, the No. 1 mixed martial arts promotion in the northeast, returns for the first time since January with its official debut at “The Tent” at the Crowne Plaza Hotel in Warwick, RI, on Wednesday, October 14 at 7 pm ET.

There will be no fans in attendance, but CES MMA 61 will stream live on FIGHT PASS, the industry’s preeminent streaming service for combat sports. Visit FIGHT PASS for more information on subscription packages and how to access the service live on fight night.

“CES is excited to get back to work showcasing some of the most talented fighters in the region to a worldwide audience on UFC FIGHT PASS,” said CES COO Jimmy Burchfield Jr. “Expect fireworks in October when these fighters return to the CES cage.”

CES 61 will be the promotion’s first live event – and the first of any kind in Rhode Island since the coronavirus pandemic forced the cancelation of all live events in March – since January 24 when UFC vet Matt Bessette of Connecticut captured the vacant CES MMA Featherweight World Championship with a third-round knockout win over Charles Cheeks III in the main event. The event is also the promotion’s first at the Crowne Plaza and will be held outdoors under the venue’s 10,400-square-foot climate-controlled tent.

“The Crowne Plaza Hotel in Warwick is thrilled to host Rhode Island’s first combat sports event since the beginning of the COVID-19 pandemic,” said Crowne Plaza General Manager Lynne Oscarson. “We are fully open and operating with newly-renovated guest rooms, and public space. In addition, we’ve also put up our popular 10,000-square-foot Garden Pavilion to safely accommodate RI’s ‘Take it Outside’ initiative for all gatherings. We are the best option for any event, meeting, or social event due to our strict safety protocols.”

Gotti’s return to the cage adds instant star power to CES MMA’s long-awaited return. The 27-year-old rising prospect last fought at CES 60 in his toughest test to date against, where he earned a hard-fought unanimous decision victory over the dangerous Marcos Lloreda in his FIGHT PASS debut. The always-exciting Ajim also appeared on the CES 60 undercard, scoring a knockout win over previously-unbeaten Andres Rodriguez 3 minutes, 14 seconds into the third and final round.