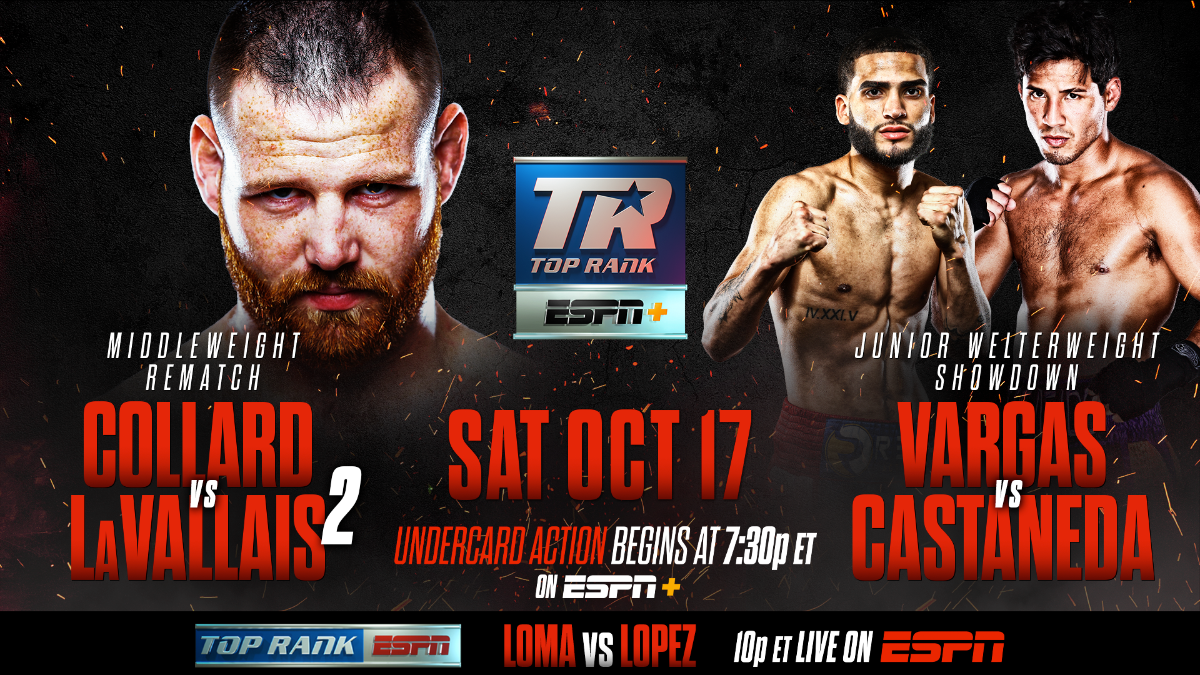 Collard, the MMA pro-turned contender for 2020 “Boxing Prospect of the Year,” will fight Quincy LaVallais in an eight-round middleweight bout on the Vasiliy Lomachenko-Teofimo Lopez undercard on Saturday, Oct. 17 from the MGM Grand Las Vegas Conference Center. It is a rematch of their June 2019 fight, which was ruled a draw.

Collard-LaVallais 2 and additional undercard bouts, including a 10-round junior welterweight clash between top prospect Josue “The Prodigy” Vargas and Kendo Castaneda, will stream live on ESPN+ at 7:30 p.m. ET.

“A marquee main event deserves marquee supporting fights, and we have an incredible lineup in store underneath Lomachenko-Lopez,” said Top Rank chairman Bob Arum. “Vargas can graduate to contender with a win over Castaneda, and Clay Collard is back to once again put on a show. Tune in early to ESPN+ to kick off an incredible night of boxing.”

Collard (9-2-3, 4 KOs), who is 5-0 with 3 knockouts in 2020, began the year with three victories over previously undefeated prospects. In January, he toppled the 9-0 Quashawn Toler by unanimous decision in Toler’s hometown of Cincinnati, Ohio. The following month, he knocked out the 5-0 Raymond Guajardo in the second round of a bout that saw both men hit the canvas. He made his Bubble debut June 18 and battered the 6-0 David Kaminsky en route to a split decision nod. Collard has notched knockouts in his last two Bubble bouts and returns against LaVallais (9-0-1, 5 KOs), a native of Kenner, La. Collard and LaVallais fought in New Orleans, and LaVallais escaped with the draw. LaVallais has won two fights since, both by first-round stoppage.

“I’m a born fighter, and I’m grateful to be back on such a significant card,” Collard said. “When Quincy and I fought the first time, I knew I’d done enough to win, but we were in his hometown. We’re fighting on neutral ground this time.”

Vargas (17-1, 9 KOs), and his teeth, made an impression in his last bout. Vargas lost a veneer, but still managed to nearly shut out Salvador Briceno over 10 rounds in an ESPN-televised co-feature. He has won 11 consecutive fights and takes a step up against Castaneda (17-2, 8 KOs), a San Antonio-born boxer-puncher coming of a competitive decision loss in July to Jose “Chon” Zepeda.

In other undercard bouts scheduled for ESPN+:

Vivas’ last fight was one of the best of 2020, a 10-round war against Carlos Jackson that took place July 2 inside the Bubble. Vivas and his hellacious body attack earned him the unanimous decision nod. Moralde, a top Filipino contender, is 3-1 since a September 2018 decision loss to Jamel Herring at junior lightweight.

Former USA Boxing amateur star Randall takes a step up in class against Rivera, a Puerto Rican knockout puncher who has yet to see the third round as a professional. Randall, from Houston, Texas, defeated Clay Collard via unanimous decision in June 2019.

The 17-year-old Tucker, who signed with Top Rank earlier this year, made his professional debut Sept. 19 and scored a first-round stoppage over Deandre Anderson.