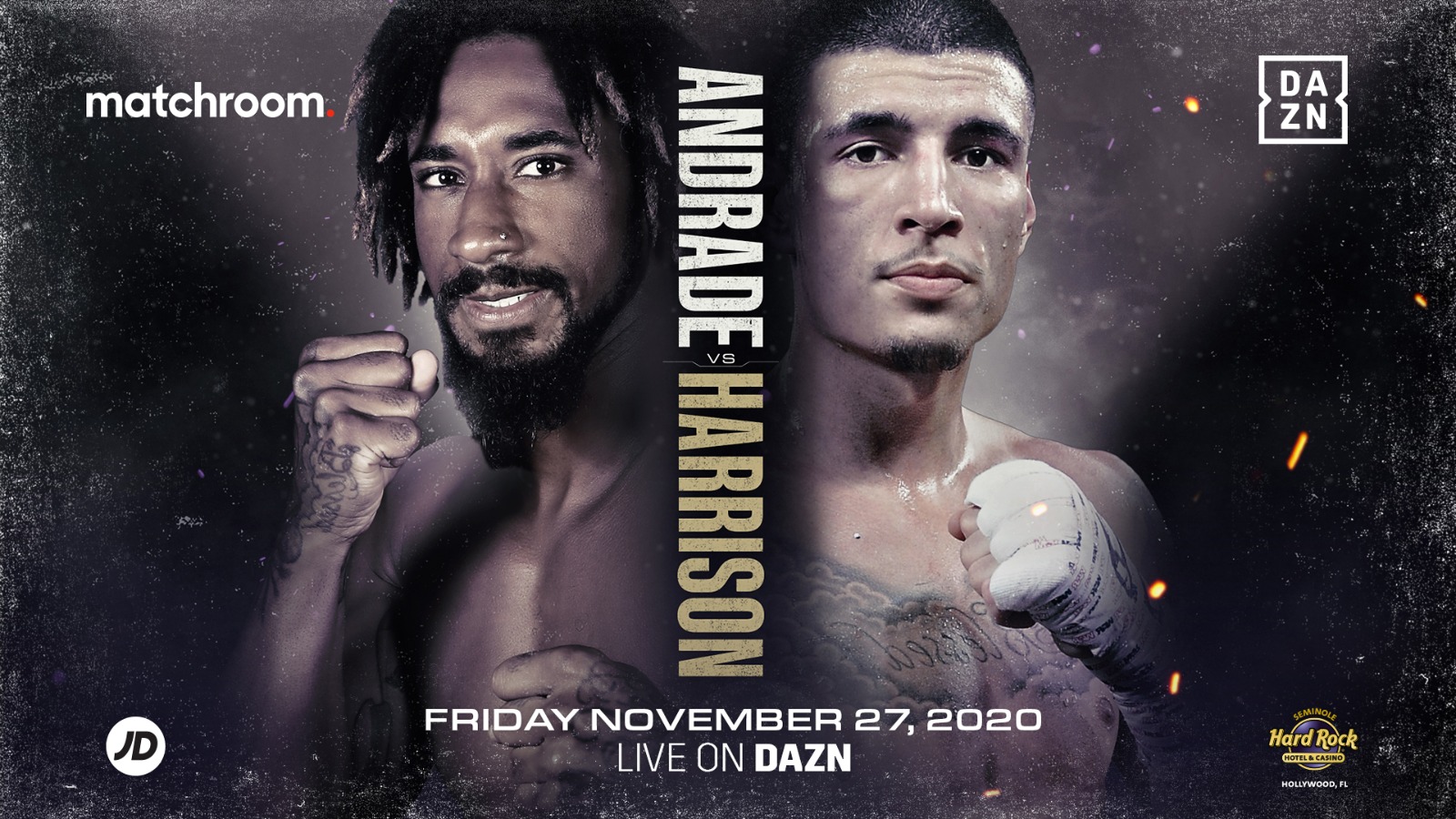 WBO World Middleweight champion Andrade (29-0 18 KOs) is in action following the third successful defense of his belt in January with a ninth round stoppage win over Luke Keeler in Miami.

The Rhode Island star returns to the Sunshine State for the second time in 2020, and while the 32 year old intends to defend his crown in early 2021, Andrade is testing the waters for a move up to 168lbs in the future where he would be gunning to become a three-weight World champion.

‘Boo Boo’ has his eyes set on his fellow champions at Middleweight, his mandatory challenger Liam Williams and the kings up at 168lbs, but the 32 year old boogeyman of the division is keen to remain active and look to his future plans while waiting for those big nights.

“It’s me again,” said Andrade. “I thought long and hard about this and at the end of the day, this is another opportunity for me to go out there, get another win, look spectacular doing it, and testing what my body feels like at 168 pounds. I am fighting a young, undefeated guy, who was a good amateur and has been waiting for his moment. This is his moment, fighting me. I need to make sure I’m ready because he’s hungry and beating me changes his life.

“Is this the big fight I wanted, or have been chasing? No. But what am I supposed to do? Sit here and keep waiting for someone to answer the phone or accept one of Eddie’s offers? I’m in the prime of my career and I want to stay busy and fight as much as possible. With everything going on with COVID, you don’t know what’s going to happen. I have the opportunity to fight now, and I’m taking it. My job is to go out there, take care of business on November 27 and then 2021, it’s time for one of these big names to step up to the plate. You can’t duck me forever. Let’s give the fans what they want and deserve to see.”

Harrison (34-0-1 20 KOs) is an undefeated contender at 168lbs and ready to rip up Andrade’s script. Harrison’s earlier pro success featured at Welterweight back in 2016 before personal issues led him to walk away from the sport, but now the 26 year old former amateur star is on a new path with four stoppage wins around Super-Middleweight and he’s ready to shine on the biggest night of his career.

“This is the opportunity I have been waiting for my entire life,” said Harrison. “This is why I started boxing. All of the time I have dedicated to this sport, I finally get my opportunity to show the world who I am and what I am capable of on November 27. Demetrius talks a big game, and says he is the boogeyman of the division, but who has he fought? Then he goes out, fights whoever it is, runs around the ring, picks up a win and goes back to running his mouth. He says that he is one of the best pound-for-pound fighters in the world, then ok, so be it, on November 27 I take his spot. I know that people are going to doubt me going into this fight, and that is fine. That fuels my energy. Keep doubting me. Andrade doesn’t know what he got himself into. He better be ready when we step into that ring because I coming for him.”

“This is a vital night for Demetrius to both stay active and see how he feels up at Super-Middleweight,” said promoter Eddie Hearn. “Demetrius is after those massive fights at both 160lbs and 168lbs and 2021 promises to be a huge year for him, but he cannot take Dusty lightly, as those big plans go out of the window on a night where Harrison can take his career to new heights.”

Andrade’s clash with Harrison is part of a huge night of action in Florida, topped by Daniel Jacobs’ grudge match with Gabriel Rosado at Super-Middleweight.

Marc Castro will make his pro debut on the undercard of Daniel Jacobs’ (36-3, 30 KOs) grudge match with Gabriel Rosado (25-12-1, 14 KOs). The Fresno talent was slated to make his bow in the paid ranks in Tulsa, Oklahoma in August, but he tested positive for COVID-19. Now the amateur sensation finally laces them up and is joined on the undercard by fellow amateur rulers in Olympic gold medalist Daniyar Yeleussinov (9-0, 5 KOs) faces former unified World champion Julius Indongo (23-2 12 KOs) for the IBF Intercontinental Welterweight title, three-time World amateur champion Magomedrasul Majidov (2-0, 2 KOs), and young talents Nikita Ababiy (9-0, 6 KOs) and Alexis Espino (6-0, 4 KOs).