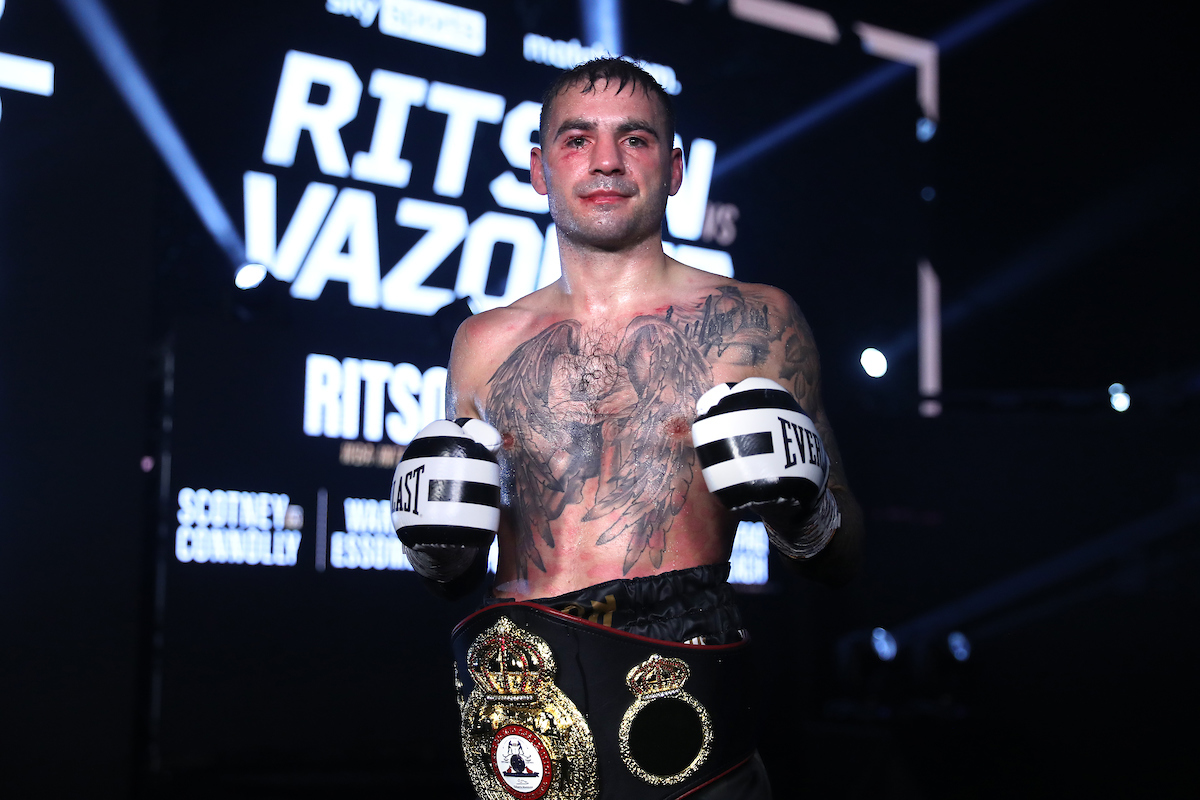 Lewis Ritson won a controversial split decision against Miguel Vazquez at the East of England Arena in Peterborough to claim the vacant WBA Intercontinental Super-Lightweight Title and improve his record to 21-1 (12 KOs).

Newcastle’s Ritson looked in trouble of slipping to defeat through 12 frustrating rounds which he later described as an “eye-opener”. Ritson got the nod from two out of three judges, with one giving the fight 116-113 to former Lightweight World Champion Vazquez.

“It just depends what you like doesn’t it,” Ritson told Matchroom afterwards. “He was tapping me and running away. I was hitting him with the cleaner jabs. It was very frustrating being out the gym a year and then facing that style.

It was probably more awkward than I thought it was going to be. The more the fight went on the more frustrated I got. It was a big eye opener. We’ve been mentioning the Prograis fight, tonight was a bit of an eye opener that we’re a million miles off that fight.

“We need a couple more fights like Vazquez, maybe not his style. That’s what you get when you step up. We had a hard job doing it. I’m improving as a fighter but I’ve got a lot more improving to do.”

Salford’s Marc Leach earned himself a shot at British Super-Bantamweight Champion Brad Foster as he upset former amateur star Qais Ashfaq, dropping him twice on the way to winning a unanimous points decision in their ten-round eliminator

“I’m feeling over the moon,” Leach told Matchroom afterwards. “I’ve said before in previous interviews, the underdog tag means I’ve got nothing to lose and lots to gain. I felt good in there. Mine, Jamie’s and Nigel’s tactics worked to a T. Happy days.

“I felt like I had had him in trouble. Nigel and Jamie know that I’ve got power behind me. We moved up a weight as well. I presume he didn’t know I had that power. I believe in myself and it worked. Even at my weight, Bantamweight, I’m supposed to be next in line for the British Title. Whichever one comes first, I’ll happily take.

“Hopefully after one or two more fights at this level I won’t have to work anymore. This is the life I have chosen. I work nights, six until two. It’s not ideal but I’ve got kids to feed and a family to look after. Hopefully this turns into more opportunities for me.”

Joe Laws was knocked out and lost his unbeaten record in a disastrous fight against Rylan Charlton. Fan-favourite Laws was sent crashing to the canvas three times in a third-round wipe-out.

Charlton hurt Laws with a body shot in the earliest exchange then floored him with a left hook in the opening round. Laws never recovered – Charlton did major damage with the second knock-down then landed a massive uppercut which ended the fight in brutal fashion.

‘The Benwell Bomber’ Laws entered wearing his trademark Mexican attire and sporting a nine-fight perfect record but experienced the most punishing night of his short career against the ‘Pint Size Powerhouse’ Charlton.

“It’s what I expected,” said Charlton afterwards. “I’ve been training my ass off for this. No disrespect to Joe, I think he’s a great guy, a great boxer, but he’s a ticket seller. He sells loads of tickets to get into the positions that he gets in. He’s a good fighter and he’s a very nice guy. I have been training my ass off. I can’t really sell that many tickets. I’m the fighter. I’m just pleased I got the opportunity to showcase my skills.

“I felt like it got a little bit scrappy at some point. I was trying to stay as composed as possible. I saw the opening and I stuck it up there. That’s all she wrote. I always knew that this would be the result. I trained too hard for it not to be the result. My power was too much.

“Pint Size Powerhouse all the way! He’s got a massive following and this won’t be the end of Joe. He’ll be back. This has just rocketed my career in the right direction. Eddie get this contract, and let’s go! Get me out before Christmas.”

Thomas Patrick Ward survived a horror cut in his war-draw with Thomas Essomba but lost his status as Britain’s most in-form fighter.

The County Durham Super-Bantamweight, trained by Neil Fannon alongside Lewis Ritson in Hartlepool, arrived at the East of England Arena with a perfect 29-0 record and both eyes on a World Title shot in 2021.

But an accidental clash of heads in round seven of the rollercoaster rumble took the fight to the cards early and the three judges could not split the rivals.

“To be honest, the fight was close, but I knew I was better than him,” Essomba said afterwards. “We had the accident, and then the judges decided the outcome, I have to respect their decision. I didn’t see the head clash. I don’t know who’s fault it was.

“I’ve had a really long and good camp since my last fight against Sunny Edwards. If I would have had two or three more weeks’ notice then I could have prepared more for Tommy. I had six days’ notice. I know if we fight again the fight will be totally different. I will give him a rematch, any time and anywhere.”

Speare’s crafty left hand twice snapped back Baker’s head inside the first 45 seconds. Baker wouldn’t take a backwards step but his come forward style played into Speare’s hands at times. Speare landed the best punch of a reckless exchange in the final seconds of the opening round.

Baker’s determination to plough forwards resulted in him being caught by lead hooks. Another vicious brawl broke out in the second round and Speare had the best of it. Speare went two rounds up after a breathless start to the fight.

Baker began piling on the pressure in rounds three and four, and suddenly the 30-year-old looked the most comfortable boxer in the ring. Up close, Baker banged away at the body and Speare was coming off second best.

Former Midlands Area Lightweight Champion Baker was by far the busier fighter in the second half of the fight and his relentless pace earned him a 59-56 points win on the referee’s scorecard.

“I’m floating,” said Baker afterwards. “It’s amazing. I’ve been here a few times. That winning feeling is something else. When I fought Fiaz two weeks ago my corner was quite confident in how I was doing. Tonight, they were telling me I was losing every round! I did think I’d won, but you just don’t know.

“When I heard Birmingham first, I knew then and it was amazing. He caught me twice to be fair. He caught me with two good shots. He’ll be back again, he’s a strong kid. I hope it was a good fight for the fans. It was a lot tougher this time than it was two weeks ago. The two weeks off didn’t recharge me as much as I’d have liked. It was tough but I was never going to say no to being here. I bit down on the gumshield and toughed it out.”

Catford’s acclaimed amateur Ellie Scotney shined on her professional debut as she outpointed Bec Connolly over six rounds, dropping the tough 36-year-old in the third.

Scotney’s fast left hook connected four times inside the first minute. The speed advantage for Scotney was blatant to see during an impressive and dominant first round.

An overwhelming flurry of hooks forced Connolly to sink to a knee in the third round. With 10 seconds left in the round, Scotney landed more hard shots but the bell saved Connolly.

22-year-old Scotney tried to force the stoppage but Swindon’s Connolly bravely stood up to her best punches, despite bleeding from a cut above her right eye.

Scotney was in complete control throughout her impressive debut but Connolly heard the final bell, with the referee awarding Scotney a 60-53 win on his card.

“Bec is a tough person and she came to fight,” Scotney told Matchroom afterwards. “It was brilliant to share a ring with her. She gave it her all. She’s a nice woman. I feel like I’ve got a lot to work on still. I’m 22 and boxing at the weight above, so now I’ll be going down to the weight I should be at and I’m so looking forward to getting out again.

“I rushed it a little bit. I got a bit carried away when I landed a shot. I’ve got a lot to work on. I’m buzzing to get the first one out of the way. It’s been a long time coming. I’m going to get back in the gym on Monday if Adam lets me. I love boxing.”