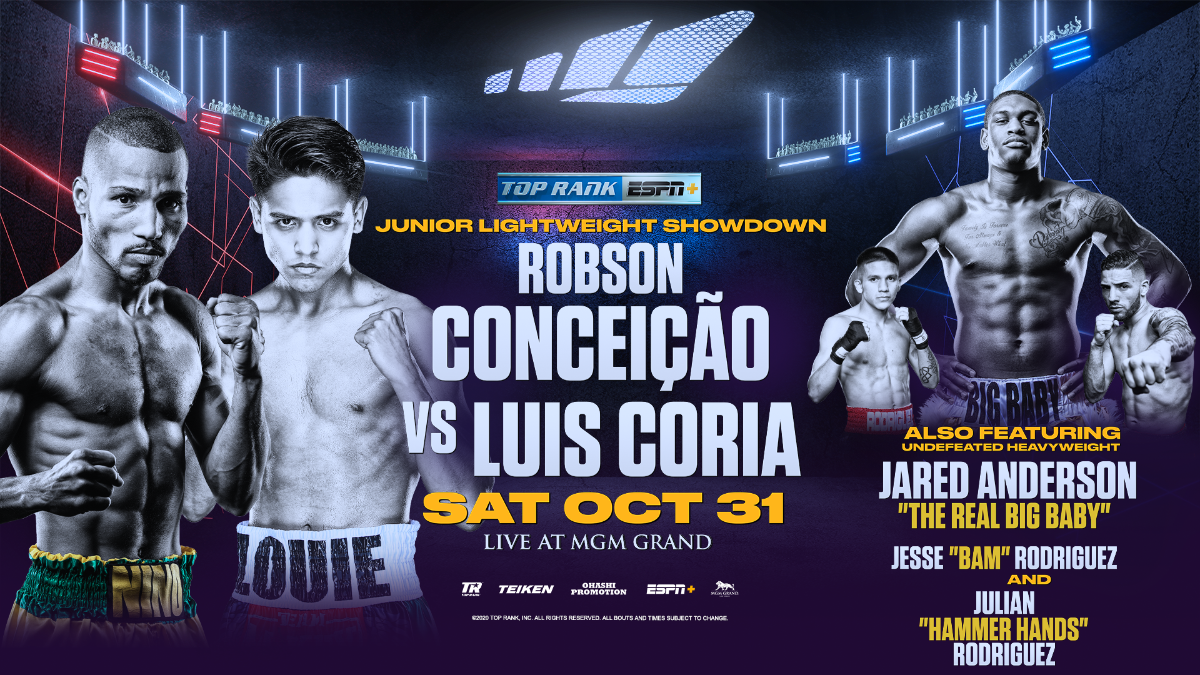 LAS VEGAS (Oct. 22, 2020) — Robson Conceição, a 2016 Olympic gold medalist for his native Brazil, seeks to notch the signature win of his unblemished professional career when he takes on Luis Coria in a 10-round junior lightweight fight Saturday, Oct. 31 from the MGM Grand Las Vegas Bubble.

The card will also feature Toledo’s 20-year-old heavyweight sensation, Jared “The Real Big Baby” Anderson (6-0, 6 KOs), who will fight Luis Eduardo Pena (6-1, 6 KOs) in a six-rounder. Anderson has three knockout wins inside the Bubble and four first-round stoppages in his young career.

The entire Inoue-Moloney card will stream live on ESPN+ beginning at 7:30 p.m. ET, with the co-feature (Brodnicka-Mayer) expected to start at approximately 10 p.m. ET.

Conceição (14-0, 7 KOs) turned pro under the Top Rank banner in 2016 after an amateur career that included the Olympic gold medal, more than 400 victories and two World Championship medals. He last fought in August in Sao Paulo, Brazil, and knocked out Eduardo Reis in the second round. Conceição takes a giant step up in class against Coria (12-3, 7 KOs), a Robert Garcia-trained fighter who is coming off a razor-thin majority decision loss in June against Adam Lopez in one of the year’s best back-and-forth brawls.

“Hammer Hands” Rodriguez is 4-0 with three knockouts since returning from a nearly two-year layoff last July, re-establishing himself as one of the 140-pound division’s top prospects. He made his Bubble debut Aug. 22 and knocked out the previously undefeated Anthony Laureano in the first round. Rodriguez turned pro in 2013 as an 18-year-old, and at 25 years old, is approaching contender status.

Rodriguez, a 20-year-old southpaw prodigy from San Antonio, Texas, put forth a star-making performance inside the Bubble Sept. 5, knocking down the normally iron-chinned Janiel Rivera three times en route to a first-round stoppage. Trained by Robert Garcia and promoted by Teiken Promotions, Rodriguez has won four straight bouts by stoppage, and his sublime footwork reminds many boxing observers of Vasiliy Lomachenko.

Hiraoka, a stablemate of Inoue’s from Yokohama, Japan, made his U.S. debut last November and knocked out Rogelio Casarez in two rounds. A former high school distance-running star, the 24-year-old also bested former world title challenger Akihiro Kondo via 10-round decision in July 2019. Edwards, from Paterson, N.J., hopes to snap a two-bout losing skid and pick up his third victory over a previously undefeated prospect.

Cortes returns for his second Bubble bout nearly four months removed from his July 7 slugfest against Alejandro Salinas. Cortes recovered from a fourth-round knockdown to earn an eight-round unanimous decision. As an amateur, he notched a pair of victories over undisputed lightweight world champion Teofimo Lopez. Acosta, from Long Beach, Calif., has won three consecutive fights since a six-round decision defeat to Ruben Torres.