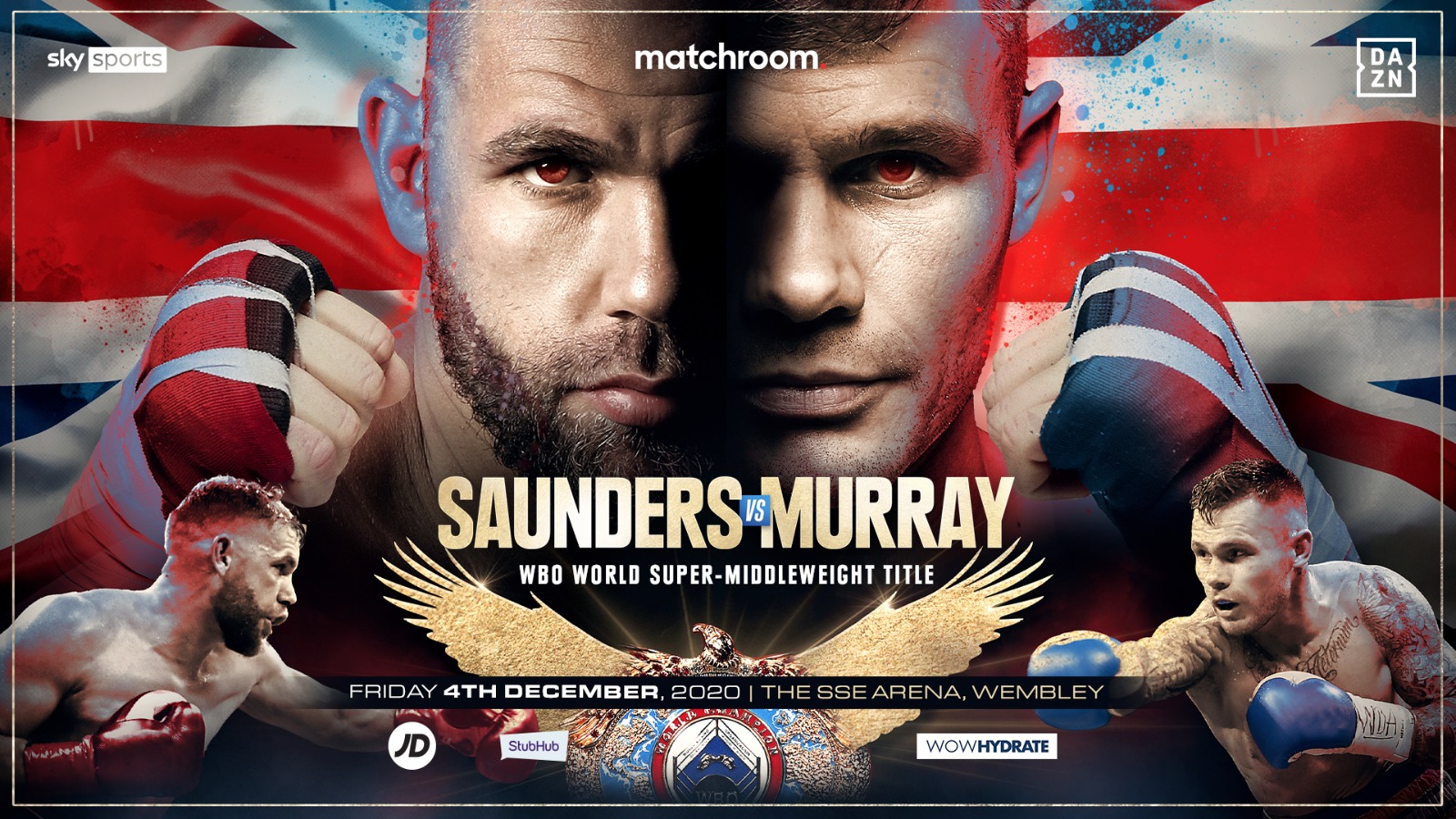 SAUNDERS VS. MURRAY LANDS ON DECEMBER 4

Billy Joe Saunders will make the second defence of his WBO Super-Middleweight World Title against British rival Martin Murray at The SSE Arena, Wembley on Friday December 4, live on Sky Sports in the UK and on DAZN in all of its nine markets including the U.S.

Hatfield star Saunders (29-0, 14 KOs) became a two-weight World Champion with a shutout points win over Shefat Isufi in May 2019, outclassing his Serbian opponent over 12 rounds to add the WBO 168lbs crown to his collection.

The former Middleweight ruler was on the verge of securing a mega fight with Mexican pound-for-pound icon Saul ‘Canelo’ Alvarez earlier this year before the coronavirus pandemic turned the sporting world on its head and skippered his shot at greatness.

Four-time World Title challenger Murray (39-5-1, 17 KOs) stands in the way of unification fights for Saunders in 2021, and the St Helens man is more determined than ever to finally land a World Title of his own and put his rivalry with Saunders to bed after their scheduled meeting in 2018 fell through twice.

“I am very happy to be defending my WBO World Title again,” said Saunders. “I haven’t boxed for a year and I really do miss being in the ring. I can’t wait to have my 30th professional fight and finish the year with a bang before a big 2021.

“The coronavirus pandemic has affected everybody in many ways, and it has had a big impact on the sport of boxing. The Canelo Alvarez fight falling through was very frustrating for me but now the journey continues in December.

“Martin and I were supposed to fight twice before but it didn’t happen either time. He said some stuff and so did I, so let’s see who can back it up. I’m enjoying training with Mark Tibbs. He’s incredibly knowledgeable in the sport of boxing and we are working on new stuff that we will show on the night.”

“I’m really looking forward to getting back in there and fighting for another World Title,” said Murray. “The big fights definitely bring out the best in me. This year has been a good year for me personally. It seemed like all the stresses of life were taken away so I really enjoyed being able to relax a bit more and spend even more time with my family.

“There was no bad blood really between me and Billy to be honest, it was just a lot of frustration after he pulled out twice. That got left where it was, but we’ve definitely got some unfinished business. I’m expecting a hard fight and Billy Joe to be at his best, so I’ll be ready.”

“I’m delighted to announce another big fight for the 2020 schedule as we close out this tough year with a huge bang,” said Eddie Hearn. “All-British World Title fights are always special, especially in the Super-Middleweight division, and I’m really excited to see Billy back in the ring. We were 24 hours away from an announcement for Billy to fight Canelo when the pandemic hit and so it throws up the final roll of the dice for Martin Murray who will give it everything on December 4.”“We’re bringing you more World Title action on our Sky Sports schedule during a thrilling end to the boxing calendar, which also features the return of Katie Taylor and some huge Heavyweight nights on Sky Sports Box Office,” said Adam Smith, Head of Boxing Development at Sky Sports.

“Billy Joe Saunders defends his WBO Super-Middleweight belt in an all-British battle against Martin Murray, with live boxing back on a Friday night! Katie Taylor returns next month on a triple-header of women’s World Title fights – and Britain’s Heavyweights also take centre stage as Usyk vs. Chisora, Povetkin vs. Whyte 2 and AJ vs. Pulev will guarantee Heavyweight drama.”