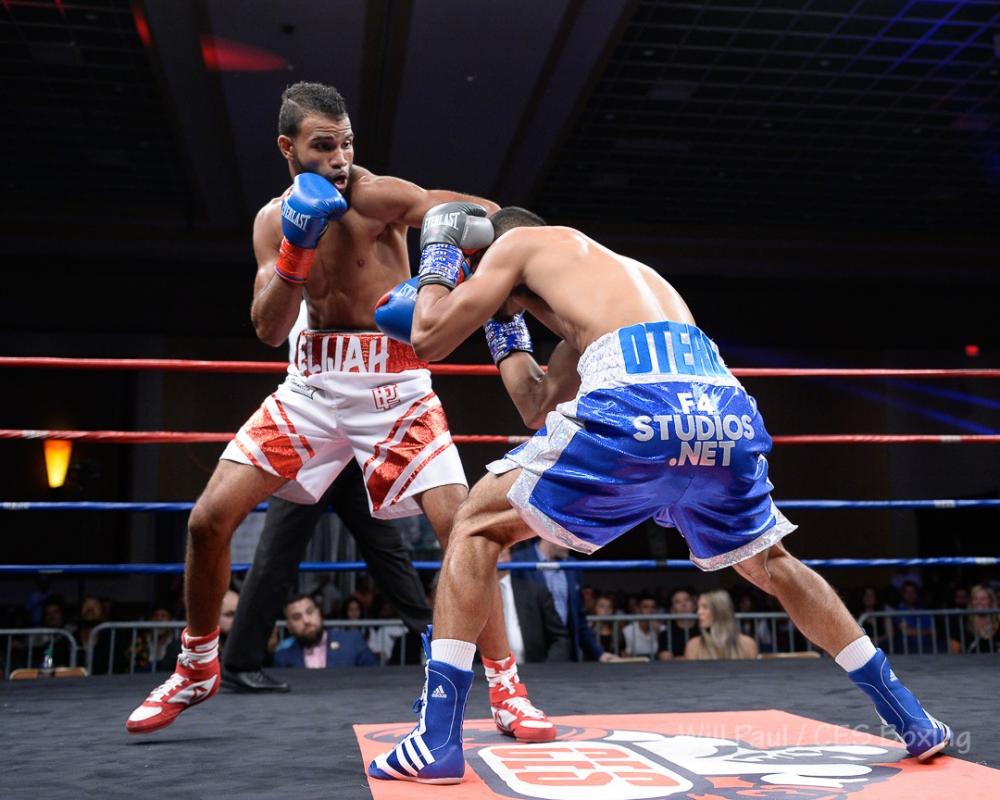 Photo courtesy of Will Paul
UNDEFEATED SUPER LIGHTWEIGHT Elijah Peixoto (left) of East Providence, RI, is one of several fighters returning to the ring Thursday, October 29, 2020, as CES Boxing ends its eight-month layoff due to the coronavirus pandemic with a live event at “The Tent” at the Crowne Plaza Hotel in Warwick, RI. The event features fight fights and will stream live on UFC FIGHT PASS. Peixoto faces Kristopher Berberich of Alaska in a four-round bout.
FOR IMMEDIATE RELEASE
Monday, October 26, 2020
The boys are back! CES Boxing ends eight-month layoff Thursday night
Region’s No. 1 promotion returns from extended COVID-19 shutdown with live event at “The Tent”
Warwick, RI (October 26, 2020) – For the first time in more than eight months, Rhode Island’s only professional sports franchise, CES Boxing, returns to live action with a special Thursday night showcase.

With strict safety protocols in place, CES Boxing ends an eight-month layoff Thursday with a lineup featuring several New England household names in addition to a pair of rising up-and-comers making their promotional debuts. There will be no fans in attendance, but the entire event streams live on FIGHT PASS beginning at 7 pm ET. Visit FIGHT PASS for more information on subscription packages and how to access to the service live on fight night

Providence’s Kahn (27-2, 18 KOs), one of the world’s top-rated super featherweights, fights for the first time since August of 2019. One of several fighters affected by the last-minute cancelation of CES Boxing’s March 12 event, Kahn was scheduled to face Mexican challenger Dennis Contreras, but will now put his two-fight win streak on the line in the eight-round main event against Colombian veteran Jonathan Perez (38-25, 30 KOs), a veteran of 63 professional bouts with 30 knockout wins on his resume.
Kahn’s inspirational journey to the ring has been well documented throughout his career. Born and raised in Liberia, the southpaw moved to the United States with his family when he was only six years old. They settled in Philadelphia, but Kahn’s father was shot and killed shortly thereafter. He and his sister ended up in Rhode Island, a byproduct of the foster care system. Kahn spent years in and out of trouble on the streets of Providence until he discovered boxing. Several years later, he was adopted by the family that would eventually raise him into adulthood, Andrea Watson and Ron Clary.
Kahn’s natural ability in the ring led to a stellar amateur career. He turned pro in 2012 at the age of 20 and won his first 19 fights over the next four years. Thursday’s return to the ring marks his fourth appearance with CES Boxing and his first since 2016 when he slaughtered Mario Antonio Macias in the second round of a scheduled eight-round bout at Twin River Casino Hotel. He faces the reliable and durable Perez, whom he defeated in 2015 at the StubHub Center in California. The 5-foot-5, 33-year-old Perez is a former WBC title challenger.
Threatening to steal the spotlight from Kahn is the Lynn, MA, native and 29-year-old welterweight standout Todd (10-1, 8 KOs), who, fresh off signing a new promotional agreement with CES Boxing, faces dangerous Puerto Rican challenger Ryan Pino (8-5-2, 4 KOs) in a six-round special attraction. Todd has won his last three fights and now steps to the plate against the 24-year-old Pino, who boasts an impressive win over previously-unbeaten Jose Angulo in addition to a draw in March of 2019 against 10-0-1 challenger Chris Velez.
Like Kahn, Peixoto (2-0, 1 KO) was supposed to fight March 12 in a four-round bout against Philadelphia’s Zaymar Brothers. The East Providence, RI, super lightweight faces Kristopher Berberich (0-1) of Alaska in a four-round bout. Perhaps the best-kept secret in New England, Peixoto finished 119-27 as an amateur, including four Southern New England Golden Gloves championships and a trip to the 2018 Olympic Trials Qualifiers.
Making their CES Boxing debuts Thursday are unbeaten prospects Francis Hogan (2-0, 2 KOs) of Boston and James Perella (5-0, 4 KOs) of Mansfield, MA. Hogan, a 6-foot-2, 20-year-old southpaw, challenges 17-fight veteran Charon Spain (2-13-2, 1 KO) of Spokane, WA, in a six-round bout. A member of the Ironworkers Union in Boston, Hogan amassed more than 200 amateur bouts before making his pro debut with a fourth-round knockout win over Bret Oren in March on the undercard of the Adam Kownacki-Robert Helenius showdown at the Barclays Center in Brooklyn.
Perella boasts a similar amateur pedigree. The 28-year-old welterweight began boxing at eight years old and finished his amateur career with a record of 120-20 in addition to winning the U.S. Championship and the New England Golden Gloves four times in three different weight classes. His amateur career includes a win over fellow Massachusetts native Rashidi Ellis, now 22-0 and one of the top welterweight prospects in the sport. Perella originally had no intention of turning pro, but eventually made the transition in March of 2019, defeating Bruno Dias by knockout in his debut. On Thursday, he faces “The Mexican Muscle” Antonio Castillo (1-1) of Ohio, an equally-accomplished boxer and MMA fighter who also boasts 11 wins in the cage. The bout is scheduled for four rounds.
The broadcast duo of CES Boxing publicist and play-by-play announcer Michael Parente and former light welterweight champion and color commentator “Sucra” Ray Oliveira bring you the action live on FIGHT PASS.
Visit CESBoxing.com for more information, or follow CES Boxing on Facebook, Instagram, Twitter at @CESBOXING.
INFORMATION
CES Boxing promoted its first event in 1992 headlined by future Champion Sucra Ray Oliveira. Over the years, CES has earned the reputation as the Heart and Soul of boxing with a rich history that includes the development of former U.S. Olympian Jason Estrada, plus Vinny Paz and Rhode Island legends Gary Balletto and Peter Manfredo Jr., both of whom rose to fame on The Contender reality television series. Through the years, Jimmy Burchfield Sr has earned several noteworthy awards, among them the NABF Promoter of the Year, and 2011 inductee into the Connecticut Boxing Hall of Fame.