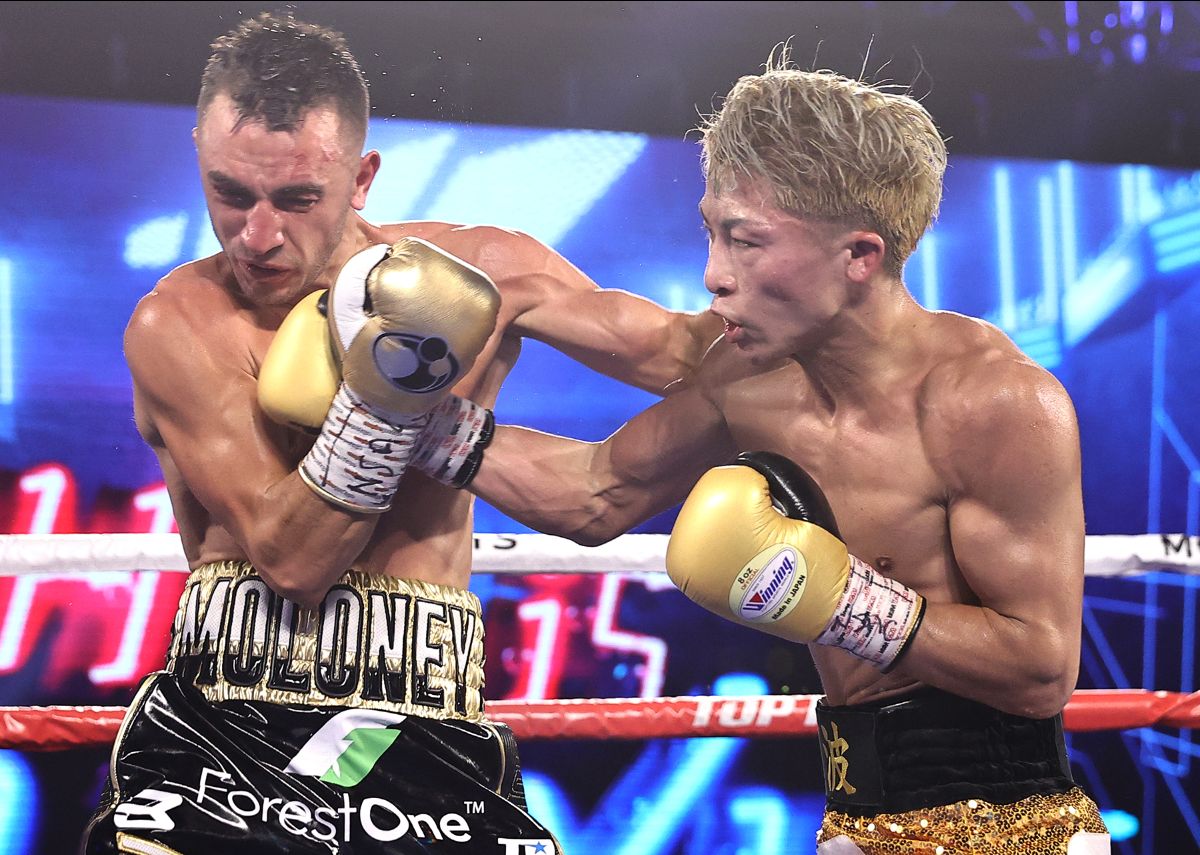 Inoue (20-0, 17 KOs) improved to 15-0 in world title bouts, and at 27 years old, the three-division world champion is approaching his physical prime. Moloney (21-2, 18 KOs), who previously challenged for a world title in 2018, saw his four-bout winning streak come to an end.

Inoue said, ““The final punch, the finishing punch, I’m very happy and satisfied with that punch.

“Moloney has a great defense, and it was very difficult to get through. The two punches you mentioned are something we really practiced in Japan a lot, and I was able to perform well and use it, and I’m very happy with that.”

Added Bob Arum, Top Rank Chairman: “The Monster is a special fighter. I haven’t seen a young fighter like that in a long time. And credit to Jason Moloney for fighting like a warrior. He gave it his absolute best.”

Mikaela Mayer called for a world title bout for quite some time. When that time came, she took advantage of the opportunity. Mayer defeated Ewa Brodnicka by unanimous decision (100-88 2x and 99-89 ) to win the WBO female junior lightweight world title, a dominant outing for the 2016 Olympian.

Brodnicka (19-1, 2 KOs) lost her world title on the scale Friday after missing weight by .1 pounds, an unfortunate end to a title reign that included five successful defenses. The scores were indicative of the bout’s one-sidedness, and Brodnicka had insult added to injury when she was deducted points for holding in the sixth and seventh rounds. Mayer (14-0, 5 KOs), a Los Angeles native, has other big names on her radar.

Mayer said, “Like {head trainer} Coach Al {Mitchell} said, her holding and her movement was a little tricky for me to catch on to. I still feel like I did win every round. There were definitely some things I could’ve done a little bit better, but ultimately it was a good learning fight.

Robson Conceicao (15-0, 7 KOs) UD 10 Louie Coria (12-4, 7 KOs). Scores: 95-92 2x and 94-93. Conceicao, a 2016 Olympic gold medalist, remained unbeaten with a gut check victory over the Robert Garcia-trained Coria. Conceicao was knocked down in the second round and had two points deducted for low blows, but won the last three rounds on two of the judges’ cards to prevail. Coria lost a majority decision to Adam Lopez inside The Bubble on June 11, and once again, fell just short on the cards.

Jared Anderson (7-0, 7 KOs) TKO 1 Luis Eduardo Pena (6-2, 6 KOs), 2:46. “The Real Big Baby” notched the fifth first-round stoppage of his young career, as he pinned Pena to the ropes and unloaded until referee Mike Ortega stepped in near the end of the round. The 20-year-old Anderson, from Toledo, Ohio, is now 4-0 inside The Bubble.

Andy Hiraoka (16-0, 11 KOs) TKO 4 Rickey Edwards (12-5, 3 KOs). Hiraoka, a stalemate of Inoue’s, made his second Las Vegas fight a memorable one, as he knocked down Edwards three times en route to the stoppage.