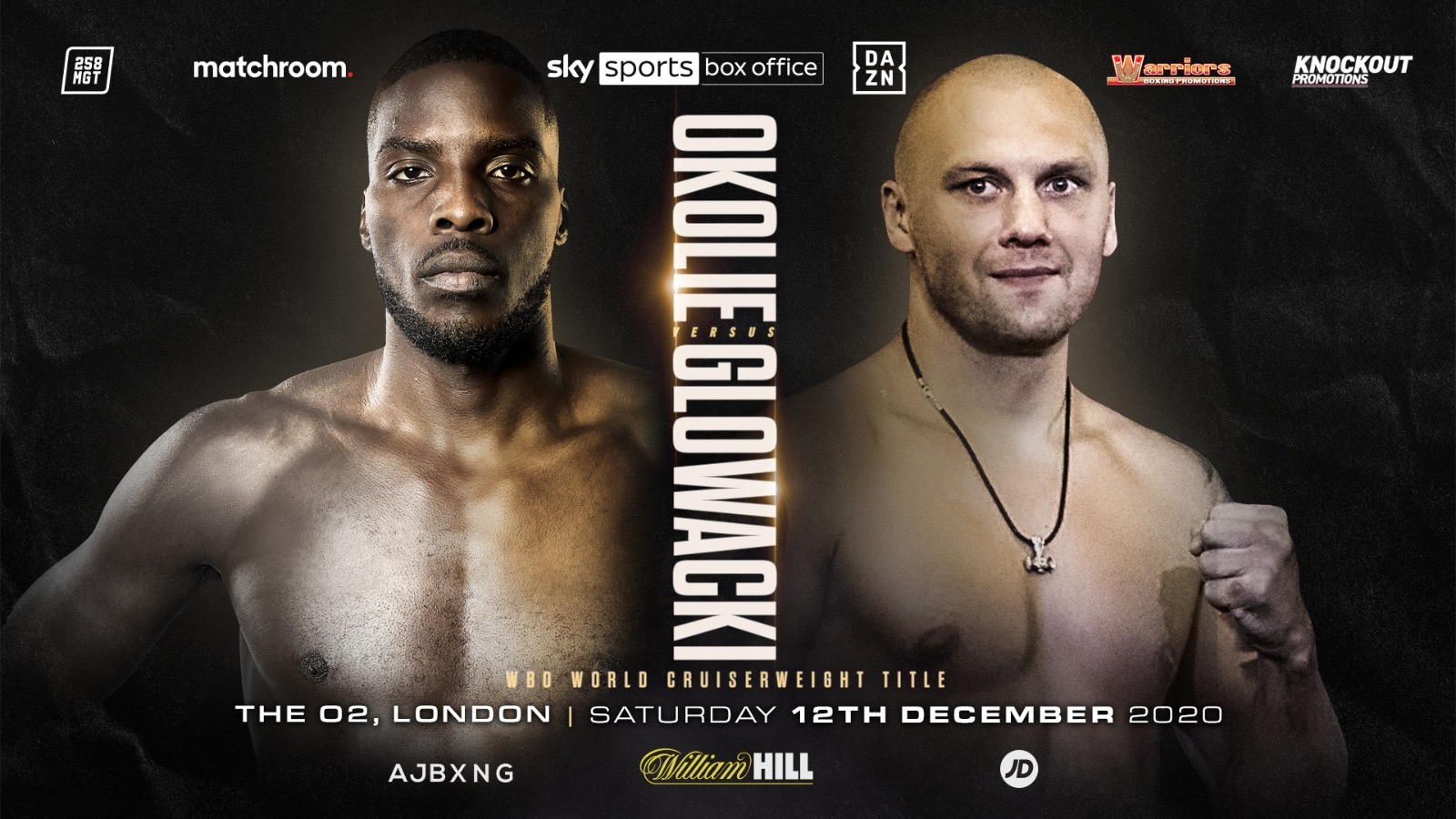 Lawrence Okolie will take on Krzysztof Glowacki for the vacant WBO Cruiserweight World Title on the undercard of Anthony Joshua vs. Kubrat Pulev at The O2 in London on Saturday December 12, shown live on Sky Sports Box Office in the UK and on DAZN in more than 200 countries and territories including Poland.

Okolie (14-0, 11 KOs) claimed the EBU European Cruiserweight Title with a seventh-round stoppage of the previously unbeaten Yves Ngabu in October last year, capping a successful 2019 which saw four knockouts in as many fights for the Hackney man.

Glowacki (31-2, 19 KOs) knocked out Germany’s Marco Huck in eleven rounds to win the WBO World Title in 2015 before widely outpointing Steve Cunningham in his first defence. He suffered the first defeat of his career against Ukrainian pound-for-pound star Oleksandr Usyk in his next fight.

The Polish southpaw earned the interim WBO Title by decisioning Maxim Vlasov at the UIC Pavilion in Chicago in November 2018 but was stopped in three rounds by Latvia’s Mairis Briedis last year in a challenge for the full title.

“It has been a long and hard road to get here,” said Okolie. “I’m very excited and blessed to have this opportunity; I’ll be grabbing it with both hands. I will become Britain’s next World Champion on December 12.

“Glowacki is a great fighter and he is someone that I looked up to when I first started boxing. I believe he won the World Title the same year I was pushing to try and get on the Olympic team when I’d had 15 amateur fights.

“He’s a former two-time World Champion and has only lost twice to two elite opponents. He’s going to be my biggest test on paper as a professional. He is a consummate professional and will do everything in his power to win.

“I have to be on my A game, and I will be. I’m happy that throughout my career I have faced the best opposition that I could have at every stage. This is just another one of those.”

“In just 14 fights Lawrence Okolie has done it all and now it’s the moment of truth,” said promoter Eddie Hearn. “Britain has the chance to crown another World Champion but Lawrence has it all to do against a great fighter and former World Champ in Krysztof Glowacki and someone who has mixed consistently at the top level. This is going to be a huge night and a huge moment for Lawrence – we can’t wait.”

“The time has come for Lawrence,” said 258 Athlete Advisor Anthony Joshua. “This is a huge opportunity, one I know he will rise to. He is about to fight at the most elite level possible. He will prepare diligently and be ready.

“The whole team at 258 MGT are behind him. We are proud to have helped guide him inside and out of the ring since his professional debut to his first World Title opportunity in under 4 years.”

Joshua (23-1, 21 KOs) defends his IBF, WBA, WBO and IBO World Titles against Mandatory Challenger Pulev (28-1, 14 KOs) on a huge night of action, with more fights to be announced soon.