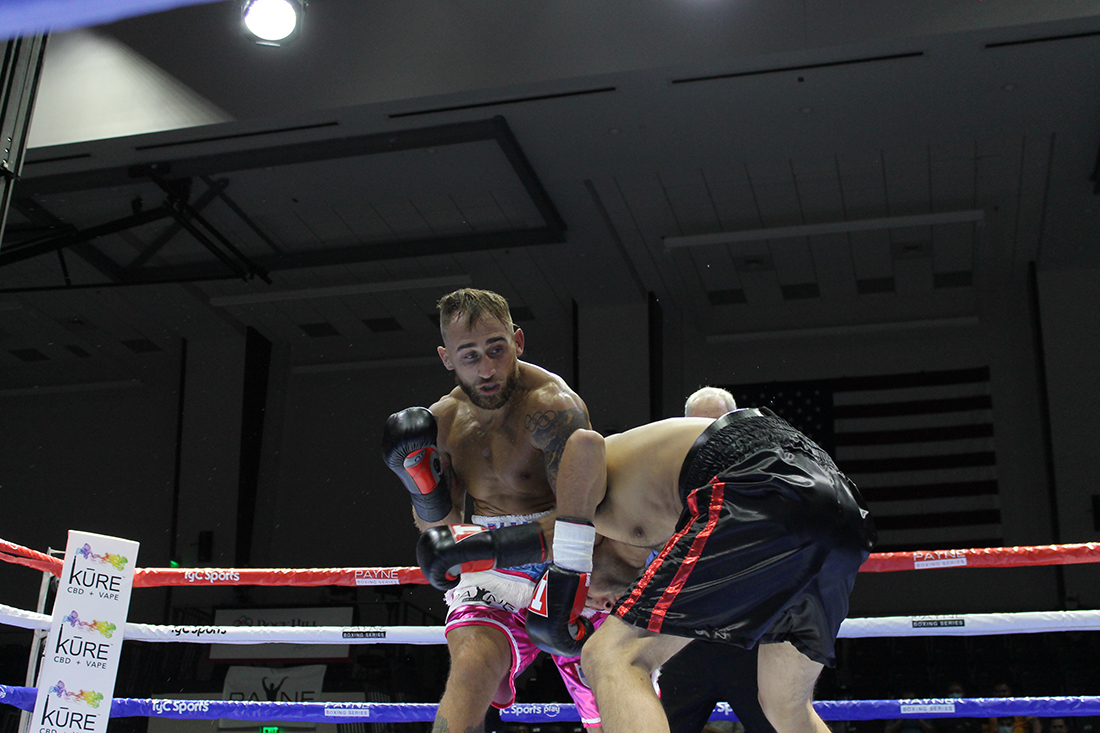 Alberto Palmetta peppered, pushed, and punished Saul Corral over five rounds and scored a smashing fifth-round TKO stoppage. After Corral repeatedly ate Palmetta’s jabs, body shots, and powerful combinations over three rounds, Hall of fame referee Bill Clancy repeatedly warned Corral and his corner the fighter was taking too much punishment. After ending the third, beginning the fourth, and ending the fourth Clancy asked Corral to show him something. At the beginning of the fifth, Palmetta landed another thudding left-hand uppercut, Clancy quickly stepped in and said it was enough and stopped the fight. Palmetta generated excitement and showed fans all over the world his star potential.

Payne Boxing introduced the boxing world to an amazing 12,500-foot boxing facility. The intimate setting which can hold 1200 – 2000 courtside seats provided the perfect setting for championship boxing. With press, media, and television seating pre-built into an arena that includes first-class concessions, The Rock Hill Sports & Event Center is the boxing sports hub of the south. The Center will host national athletic sports tournaments, conferences/conventions, concerts, and other special events, and offer healthy living activities as well as cultural and tourism opportunities, mixed with restaurants, outdoor venues, office space, apartments, and a connected five-star hotel which will add a quality of life to events and Rock Hill and surrounding areas.

Aaron Casper scores a third round upset KO victory over Blake Mansfield of Burlington, NC. Casper of Augusta, GA runs his record to 6-4 (5 KO’s) while Mansfield falls to 7-3-1 (KO’s).

Gracious in defeat, Mansfield shared this with us in a post fight interview

Jonathon Pierre won an incredible two round barn-burner by 2nd round TKO over Solon Staley. Staley caught Pierre early in round 1 but Pierre quickly recovered and unleashed 10 consecutive shots to slow Staley. In round 2, Pierre picked up his assault and dropped Staley. Staley was able to get up but Pierre poured it on and the referee stepped in to stop the fight. Pierre improves to 4-1-1 (1 KO).

Rock Hill, SC and Charlotte, NC favorite Kyle Harrel lands a body shot to win by KO at 2:19 of the first round to stop Tivan Young

Elijah Seawright of South Carolina and overwhelming fan favorite wins his pro debut by TKO at 1:52 of Round three over Roderick Gilkey

Mirco Cuello made his pro debut in smashing fashion with a thunderous 1 2 combination that dropped Akihiro Nakamura in 53 seconds. The referee counted to 10 and Nakamura did not get up until after the count of 10.

Lucas Leone and Fernando Diaz battled back and forth for six rounds exchanging heavy body shots, uppercuts, and lead right hands in the co-main event. In the end, the judges ruled it for the winner (and deservedly so because he finished stronger) an upset by UD for Fernando Diaz.