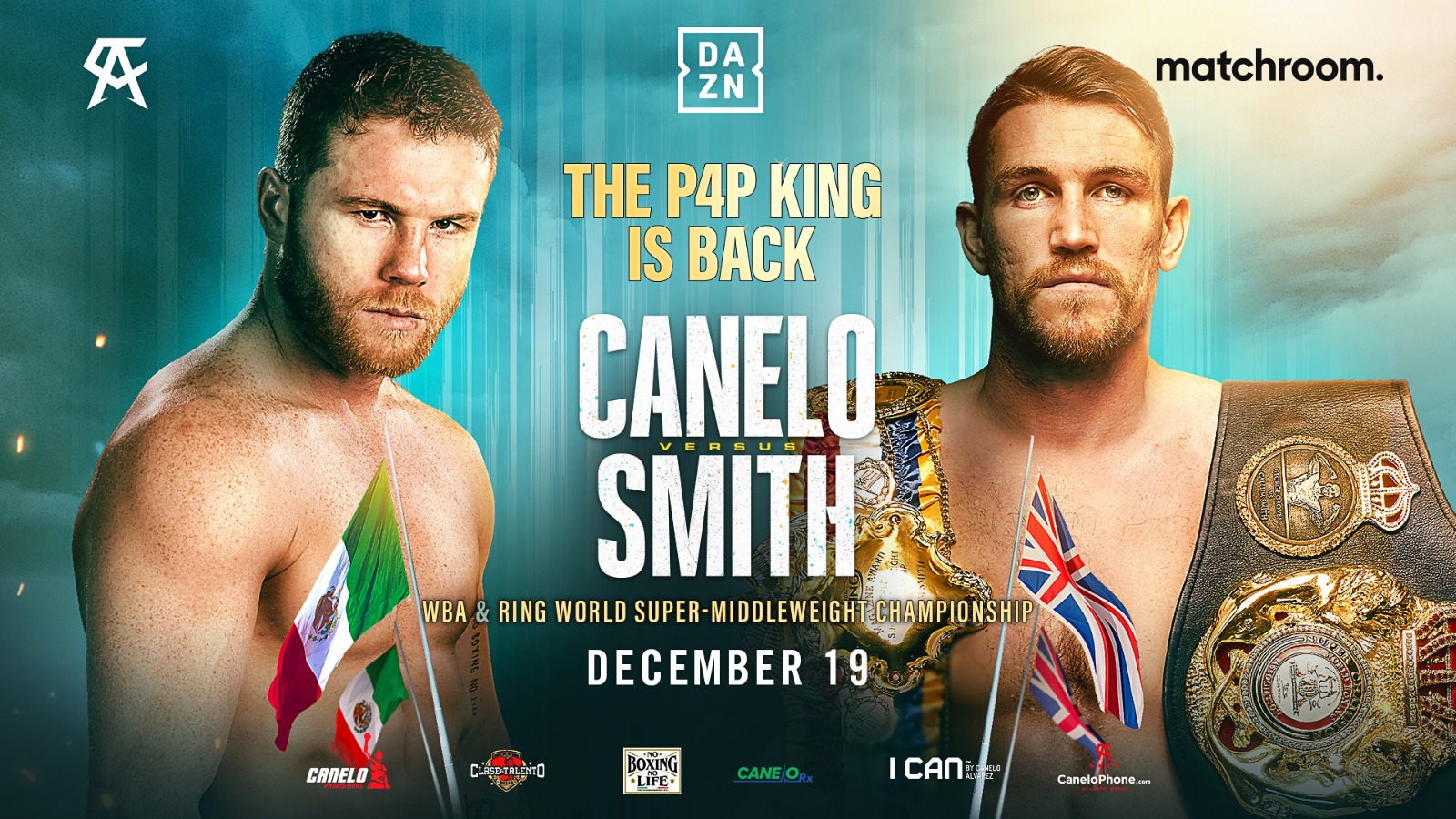 Canelo Promotions and Matchroom Boxing are delighted to announce that Canelo Alvarez will take on Callum Smith for the WBA and Ring Magazine World Super-Middleweight titles on Saturday December 19, live on DAZN in 200+ countries and territories worldwide (excluding Mexico).

Alvarez (53-1-2 36 KOs) is back in action for the first time since knocking out Sergey Kovalev in November 2019 in Las Vegas, ripping the WBO World Light-Heavyweight title from the Russian to become a four-weight World ruler.

The Mexican superstar beat Smith’s old foe and fellow Liverpool fighter Rocky Fielding in December 2018 to win the WBA regular belt at 168lbs – his third weight to rule at – and will be gunning to follow his domination at Middleweight up to Super-Middle.

Smith (27-0 19 KOs) has landed the huge fight he has craved, and the powerful Brit will be out to cement his position as top dog at 168lbs. ‘Mundo’ landed the WBA and Ring belts he puts on the line with a clinical stoppage win over fellow countryman George Groves in the seventh round of final of the inaugural World Boxing Super Series in Jeddah, Saudi Arabia in September 2018.

The 30 year old has defended the titles twice since, stopping Hassan N’Dam in New York in June 2019 and then outpointing John Ryder in his Liverpool hometown five months later. Smith will also be out for family revenge when he steps through the ropes, with Canelo having beaten Smith’s brother Liam in Texas in September 2016.

“I’m very happy to return to the ring and continue to make history,” said Canelo. “I am motivated to continue to be the best, and I look forward to fighting Callum Smith, who is one of the best at 168lbs.”

“We are very happy to return to the ring and close out the year with one more victory to continue demonstrating that Canelo is the best boxer on this planet,” said Eddy Reynoso, Sport and Talent director at Canelo Promotions and Canelo’s trainer.

“I’ve been wanting a big fight since becoming World champion, so I’m so pleased that during these challenging times we can deliver to the fans a fight between the very best in the division,” said Smith. “I truly believe I beat him and will prove that 168lbs is my division.”

“I’m delighted to be part of this huge fight to close out 2020 and deliver this opportunity for Callum Smith,” said Eddie Hearn, managing director of Matchroom Sport. “Canelo is a fearless competitor who constantly challenges himself against great champions and this will be a thrilling battle for 168lb supremacy. It’s a pleasure to be working with Canelo and Eddy Reynoso and we look forward to a spectacular event on December 19.”

“We’re thrilled to work with our great partners Canelo Alvarez, Eddy Reynoso and Matchroom on this new venture,” said Ed Breeze, DAZN EVP, Rights. “Canelo vs. Smith is a perfect fight to support DAZN’s global launch in December as we look forward to introducing the platform to sports fans around the world.”

An announcement on the venue for the fight will be made soon.