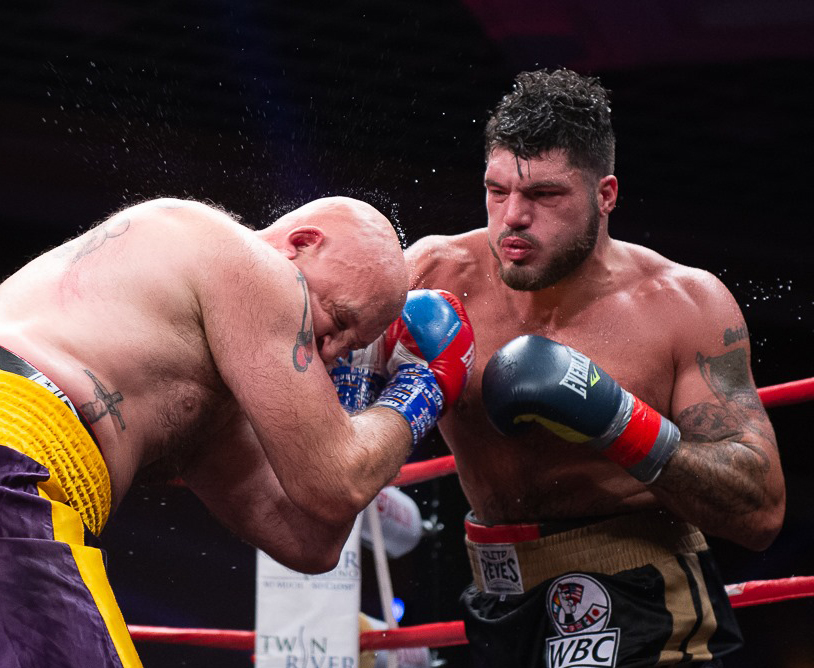 HEAVYWEIGHT CONTENDER JUISEPPE Cusumano, right, of Carini, Sicily, now faces Greg Corbin for the vacant WBC USNBC Heavyweight title on Saturday, November 28, 2020 in Los Angeles on the undercard of the highly-anticipated Mike Tyson-Roy Jones Jr. bout at The Staples Center. Cusumano was originally scheduled to face Nick Jones, but Jones has been forced to withdraw from the bout due to a licensure issue. In steps Corbin, a veteran of 18 pro fights with nine knockout victories on his resume.
FOR IMMEDIATE RELEASE
Thursday, November 19, 2020
Uncharted journey for Cusumano continues with new opponent
Hard-hitting heavyweight now faces dangerous Greg Corbin on November 28

November 19, 2020 (Providence, RI) – Boxing is one of a small handful of sports in which participants need to be ready for anything at all times, specifically outside the ring, where last-minute cancelations, fall-outs, and other roadblocks can derail a fighter’s path to success.In this unpredictable 2020 – highlighted by a worldwide pandemic that shut down most of the professional sports’ landscape for several months – heavyweight contender and CES Boxing prospect Juiseppe Cusumanohas operated under the ideology that it’s not only wise to expect the unexpected, but perhaps it’s best to brace yourself for the unthinkable.Less than two weeks from his scheduled WBC USNBC Heavyweight Title bout Saturday, November 28in Los Angeles, the 6-foot-4 “Sicilian Nightmare” is now prepping for one of boxing’s most common curveballs – the sudden change in opponent.With Mississippi’s Nick Jones unable to obtain a license in the state of California, Cusumano (18-3, 16 KOs) will now challenge the dangerous Greg Corbin(15-3, 9 KOs) of Dallas, TX, a former National Golden Gloves champion and fellow 6-4 giant ready to embrace the opportunity of a lifetime on theMike Tyson–Roy Jones Jr. undercard at The Staples Center.
Cusumano-Corbin, scheduled for eight rounds for the USNBC title, is one of seven fights scheduled for November 28, including the highly-anticipated exhibition headliner between rings legends Tyson and Jones, who fight eight rounds for the newly-created WBC Frontline championship. With no fans in attendance, the card is available for purchase on pay per view via FITE TV, or on the newly-launched Triller app, available both on Apple or Android devices. Visit tysonontriller.com for more information. Showtime is 9 pm ET.
This is no walk in the park for Cusumano; Corbin rose to prominence over a six-year stretch as a pro with 15 consecutive victories, including a spectacular knockout win over the rugged Homero Fonseca in 2018. He is best remembered for recent showdowns with boxing’s top heavyweights, notably former world champion Charles Martin and rising prospects Filip Hrgovic and Stephan Shaw, who are now a combined 25-0.Cusumano’s not-so-secret weapon may be the influence of his recent two-month training camp in Providence, where he trained under the guidance of Roland Estrada; his son, former Olympian and heavyweight contender Jason “Big Six” Estrada, and former cruiserweight title challenger Matt “Too Smooth” Godfrey. This is an ever-changing landscape for Cusumano, who typically trains in his hometown of Danville, VA, but decided to minimize distractions and add a new set of voices to his camp in anticipation of the biggest fight of his career.With Jones out, this is now a crossroads fight between two heavyweight contenders looking for a big win to get them back on track and back into the conversation among top-ranked heavyweights. The USNBC belt provides the exposure and world ranking necessary to a shot at championship glory that, unfortunately, eludes most fighters in their quest for boxing immortality.WBC World Youth Featherweight Champion Irvin Gonzalez Jr. (14-2, 11 KOs), also from Worcester, battles undefeated Forth Worth, TX, prospect Edward Vazquez (8-0, 1 KO) in an eight-round bout for the vacant WBC USNBC Featherweight Title. Also on the card, undefeated lightweight and reigning WBC Youth title-holder Jamaine Ortiz (13-0, 7 KOs) of Worcester, MA, faces African southpaw Sulaiman Segawa (13-2-1, 4 KOs) of Silver Springs, MD, in an eight-round bout for the vacant WBC USNBC Silver Lightweight Title.Visit CESBoxing.comfor more information, or follow CES Boxing on Facebook, Instagram, Twitter at @CESBOXING.
INFORMATION
CES Boxingis one of the top promotions in the northeast and one of the few to successfully promote both mixed martial arts and professional boxing. Launched in 1992 by longtime boxing judge Jimmy Burchfield Sr., the promotion is the only in professional boxing to boast two reigning WBC Youth world champions in lightweight Jamaine Ortiz and featherweight Irvin Gonzalez. CES Boxing recently teamed with UFC Fight Pass, the world’s No. 1 streaming platform for combat sports, to showcase its events to a worldwide audience.
Mike Tyson’s Legends Only Leagueis a sports league created and owned by Mike Tyson and Eros Innovations. The Legends Only League is a next-generation sports venture that provides full support and infrastructure to the world’s greatest athletes, bringing the best of the best back to the ring, onto the court, and back on the field. The league will span live sporting events including tennis, basketball, boxing, and more in addition to creating consumer products, live events, premium content, and full-service management for the greatest sports stars the globe has ever known.
Eros Innovations is a global venture creation group led by Sophie Watts that invests in and creates globally recognized businesses for celebrities across premium content, consumer products and live experiences.Owners of Eros Innovations include Eros Investments, a media and tech investment holding company whose affiliate companies include Eros Now, India’s leading OOT platform with 186 million registered users.
Triller is an entertainment platform built for creators. The app allows users to create music videos, skits, and lip-syncing videos containing background music. Launched in 2015 by co-founders David Leiberman and Sammy Rubin, Triller uses an AI-based video editing tool that automatically adds effects like overlays, fast or slow motion, and basic text to videos. Triller has more than 65 million active users and has been downloaded over 250 million times worldwide. It also boasts some big names among its users, like Cardi B, Chance the Rapper, DJ Khaled, Alicia Keys, and others. Triller is owned by Proxima Media, Sony Music Entertainment, Warner Music Group, and Universal Music Group with other investors like Snoop Dog, Kendrick Lamar, Lil Wayne, and The Weeknd.