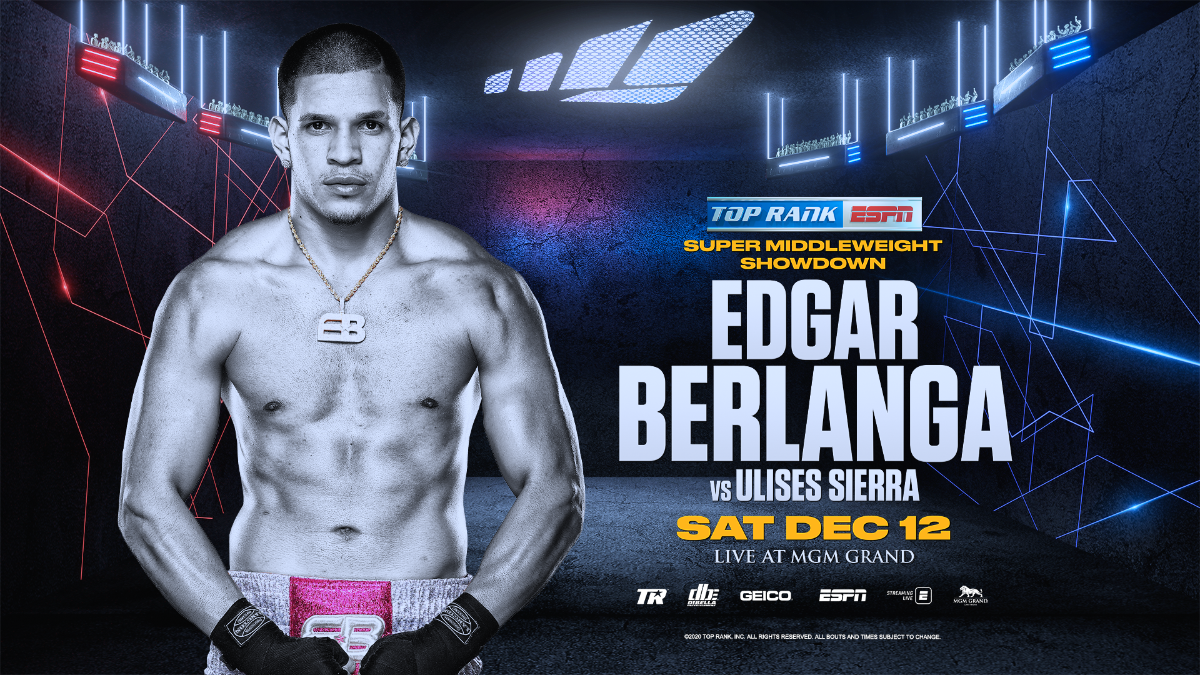 LAS VEGAS (November 25, 2020) — Super middleweight wrecking ball Edgar “The Chosen One” Berlanga has been “The Perfect One” thus far, knocking out all 15 of his professional opponents in the first round.

Berlanga puts perfection on the line Saturday, Dec. 12, when he fights Ulises Sierra in an eight-round showdown from MGM Grand Hotel & Casino in Las Vegas. Berlanga-Sierra will open the ESPN-televised tripleheader (10 p.m. ET) that includes the 10-round junior lightweight main event featuring Shakur Stevenson and Toka Kahn Clary and a 10-round lightweight co-feature between Felix Verdejo and Masayoshi Nakatani.

“Edgar Berlanga has a unique blend of power and charisma, and I believe he is the next Puerto Rican superstar,” said Top Rank chairman Bob Arum. “Ulises Sierra is the toughest test of Edgar’s career. Who knows if that will make a difference? We’ve tried to get the kid some rounds before, but once Edgar hurts his opponents, it’s game over.”

Berlanga (15-0, 15 KOs) has fought twice in 2020, spending a grand total of 2:21 inside the ring. He knocked out Lanell Bellows in 1:19 on the Vasiliy Lomachenko-Teofimo Lopez undercard, the first time Bellows had been knocked out in 30 professional bouts. Sierra (15-1-2, 9 KOs), from San Diego, entered 2020 on an eight-bout winning streak, which included a nationally televised 28-second knockout over Jose Hernandez. In January, he dropped a 10-round unanimous decision to top prospect Vladimir Shishkin.