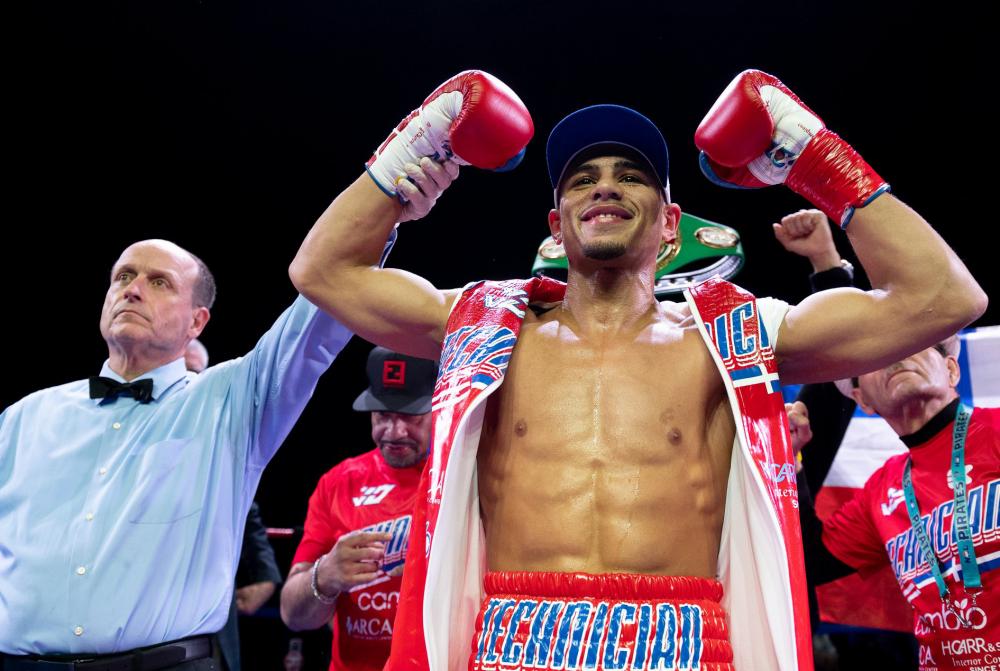 Photo courtesy of Will Paul
AND STILL ….. Jamaine Ortiz of Worcester, MA, kept his perfect record intact Saturday night in Los Angeles with a seventh-round knockout win over Sulaiman Segawa on the undercard of the Mike Tyson-Roy Jones Jr. showdown at The Staples Center. Ortiz is now 14-0 and owns both the WBC Youth and WBC USNBC lightweight titles.
FOR IMMEDIATE RELEASE
Saturday, November 28, 2020
Lightweight standout Ortiz remains unbeaten with knockout win
“The Technician” stops hard-charging Segawa to highlight Tyson-Jones undercard
Los Angeles, CA (November 28, 2020) – World, Jamaine Ortiz.Jamaine Ortiz, world.Fighting on professional boxing’s biggest stage, the undercard of the highly-anticipated Mike Tyson–Roy Jones Jr. showdown at The Staples Center, one of the sport’s brightest prospects took a major leap forward Saturday with a sensational win live on Triller and FITE.tv in front of a worldwide pay-per-view audience.Ortiz (14-0, 8 KOs), the reigning WBC Youth World Lightweight Champion and undefeated CES Boxing prospect, added another belt to his trophy case and kept his perfect record intact with a seventh-round knockout win over the dangerous Sulaiman Segawa (13-3-1), stopping his opponent with a well-placed liver shot to capture the WBC USNBC Silver Title.By defeating the hard-charging southpaw Segawa, who had never been stopped in 16 pro fights despite an impeccable resume entering Saturday’s bout, Ortiz (@JamaineOrtizR) earned instant validation among some of boxing’s most influential voices and became an immediate viral sensation across multiple social media platforms. Those in the know – the genuine boxing lifers who eat, sleep, and breath the sport from the club level all the way to the top – have been well aware of the Worcester, MA, native’s skillset for quite some time, but the former amateur standout reached a whole new level Saturday.Sharing the same ring as two pound-for-pound legends in Tyson and Jones, Ortiz proved “The Technician” is, in fact, the real deal – a legitimate championship-level prospect who may soon see his name in bright lights alongside the sport’s top contenders in the 135-pound division.


Promoted by CES Boxing since making his professional debut in 2016, Ortiz not only had to adjust to a late change in opponent after his original foe withdrew due to an injury, he willingly accepted the challenge against a dangerous southpaw in Segawa, who recently upset previously-unbeaten Gadwin Rosa and Elijah Pierce. What’s next? Only time will tell as boxing continues to adjust to the “new normal” amidst a pandemic. Ortiz, however, will be ready for whatever – and whoever – is next on the list.

Also on the undercard, CES’ Irvin Gonzalez Jr. (14-3), also of Worcester, did his part to steal the show in a thrilling eight-round war against undefeated Texan Edward Vazquez (9-0) for the vacant WBC USNBC Featherweight Title. This fight kicked off the free portion of the pay-per-view stream and gave fans an early glimpse of what to expect. Vazquez earned the win by split decision, 77-75, 75-77, 77-75 – a close, hard-fought bout that could’ve gone either way.

Gonzalez was the aggressor early, using his reach and effective jab to keep Vazquez, but once Vazquez worked his way to the inside and turned the fight into a brawl, Gonzalez occasionally strayed from the game plan. Vazquez was at his best as the pressure intensified, and Gonzalez’s output waned in the later rounds, which allowed Vazquez to eke out the decision to keep his perfect record intact.

In the third fight featuring a CES prospect, heavyweight Juiseppe Cusumano (19-3, 17 KOs) stopped veteran Greg Corbin (15-4) of Dallas in the sixth round of their scheduled eight-round bout for the vacant WBC USNBC title. The win was Cusumano’s first since February of 2019. “The Italian Nightmare” has now earned knockouts in each of his last 13 victories dating back to 2014.

This fight was also a departure from the norm for Cusumano, a Sicily native and Virginia resident who spent two months in Rhode Island training under the guidance of Roland Estrada and his son, former Olympian Jason “Big Six” Estrada and clocked in at his lightest weight in six years at Friday’s weigh-in.

Visit CESBoxing.com for more information, or follow CES Boxing on Facebook, Instagram, Twitter at @CESBOXING.
INFORMATION
CES Boxing is one of the top promotions in the northeast and one of the few to successfully promote both mixed martial arts and professional boxing. Launched in 1992 by longtime boxing judge Jimmy Burchfield Sr., the promotion is the only in professional boxing to boast two reigning WBC Youth world champions in lightweight Jamaine Ortiz and featherweight Irvin Gonzalez. CES Boxing recently teamed with UFC Fight Pass, the world’s No. 1 streaming platform for combat sports, to showcase its events to a worldwide audience.
Mike Tyson’s Legends Only League is a sports league created and owned by Mike Tyson and Eros Innovations. The Legends Only League is a next-generation sports venture that provides full support and infrastructure to the world’s greatest athletes, bringing the best of the best back to the ring, onto the court, and back on the field. The league will span live sporting events including tennis, basketball, boxing, and more in addition to creating consumer products, live events, premium content, and full-service management for the greatest sports stars the globe has ever known.
Eros Innovations is a global venture creation group led by Sophie Watts that invests in and creates globally recognized businesses for celebrities across premium content, consumer products and live experiences.Owners of Eros Innovations include Eros Investments, a media and tech investment holding company whose affiliate companies include Eros Now, India’s leading OOT platform with 186 million registered users.
Triller is an entertainment platform built for creators. The app allows users to create music videos, skits, and lip-syncing videos containing background music. Launched in 2015 by co-founders David Leiberman and Sammy Rubin, Triller uses an AI-based video editing tool that automatically adds effects like overlays, fast or slow motion, and basic text to videos. Triller has more than 65 million active users and has been downloaded over 250 million times worldwide. It also boasts some big names among its users, like Cardi B, Chance the Rapper, DJ Khaled, Alicia Keys, and others. Triller is owned by Proxima Media, Sony Music Entertainment, Warner Music Group, and Universal Music Group with other investors like Snoop Dog, Kendrick Lamar, Lil Wayne, and The Weeknd.
–CES–
Contacts:
Michael Parente, CES Boxing, 401-263-4990 or michael@teamces.com.