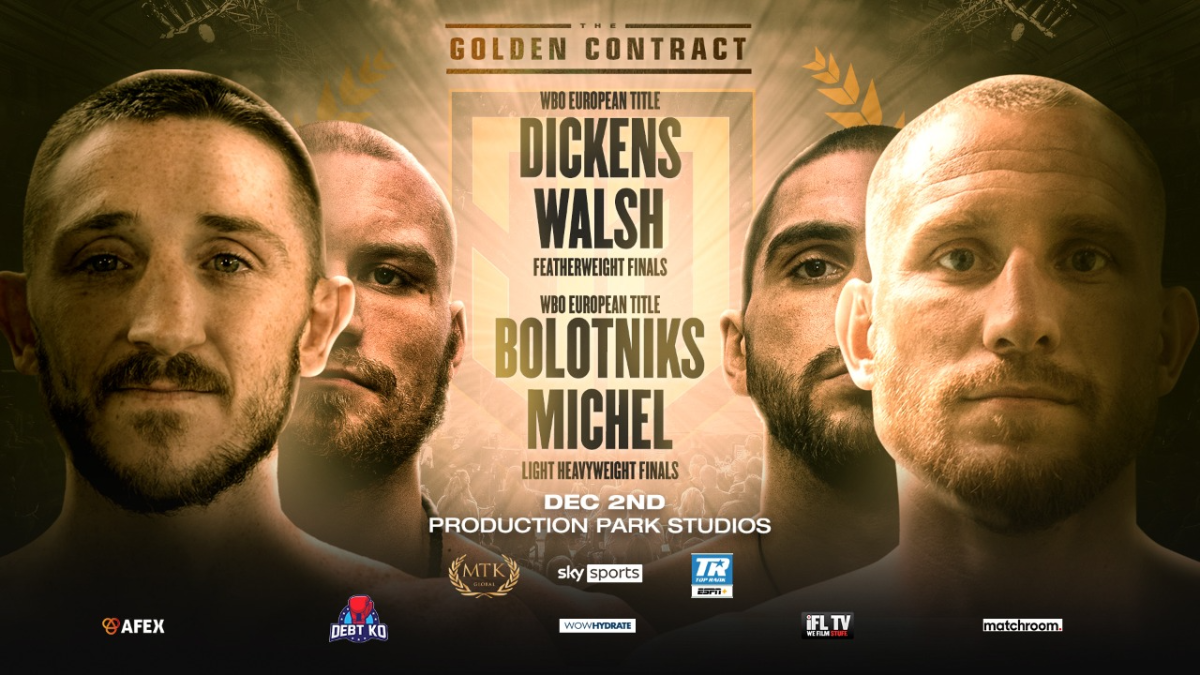 (November 30, 2020) — Two MTK Global Golden Contract winners will be crowned this Wednesday, Dec. 2, when the 10-round light heavyweight and featherweight finals are contested at Production Park Studios in Wakefield, England.

Dickens-Walsh and Bolotniks-Michel will headline an action-packed card live and exclusively on ESPN+ in the United States starting at 2 p.m. ET/11 a.m. PT.

Dickens (29-3, 11 KOs), who challenged Guillermo Rigondeaux for the WBA super bantamweight world title in 2016, has won seven consecutive fights and edged Leigh Wood by majority decision Feb. 21 in the semifinals. Walsh (26-2-2, 12 KOs) is unbeaten in six bouts since dropping a split decision to Dennis Ceylan in 2016 for the vacant European featherweight title. He last fought on the same card as Dickens-Wood and knocked down Tyrone McCullagh twice en route to a unanimous decision victory.

Bolotniks (17-5-1, 7 KOs), from Riga, Latvia, punched his berth in the light heavyweight championship match Sept. 26 with a clear points win over Hosea Burton in front of his hometown fans. He opened his Golden Contract run with a stunning first-round knockout over Steven Ward. Michel (11-1, 8 KOs), winner of three straight, knocked down Liam Conroy three times before knocking him out in the fourth round of their semifinal bout Sept. 30.

About ESPN+
ESPN+ is the industry-leading sports streaming service that offers fans in the U.S. thousands of live sports events, original programming not available on ESPN’s linear TV or digital networks and exclusive editorial content from dozens of ESPN writers and reporters. Launched in April 2018, ESPN+ has grown to more than 10.3 million subscribers.