“SFT 26: Camelo vs Sousa” this Saturday in Brazil

GUARULHOS, Brazil (November 30, 2020) – SFT MMA & Xtreme (Standout Fighting Tournament) will host its final show of the year, “SFT 26: Camelo vs. Sousa”, this Saturday night (Dec. 5) in Guarulhos, Brazil.
SFT 26: Camelo vs. Sousa will air on network television in Brazil in English and Portuguese, as well as stream in the United States and worldwide on pay per view via the FITE app and website (www.FITE.tv), starting at 9:45 p.m. ET / 6:45 p.m. PT, for only $14.99 (https://www.fite.tv/watch/sft-26/2p8ec/..
Eduardo “Camelo” Ramon (16-5-0, SFT: 1-0-0) and Cleber “Clebinho” Sousa (19-10-0, SFT: 3-0-0) will battle in the main event. The winner of this SFT middleweight title elimination match will become the mandatory challenger for SFT middleweight champion Irwing “King Kong” Machado (16-6-2), who was supposed to make his first title defense at SFT 26 against “Camelo” if not for an injury that forced “King Kong” to withdraw.
The co-featured event is a sensational Xtreme lightweight match-up between Marcilio “Black Lion” Muniz and Wagner Mangara for the first SFT Xtreme title. The wildly popular, uniquely entertaining SFT Xtreme competition allows striking, kicking and knees, fighters wear 4-ounce gloves, and clinching and fighting on the mat is prohibited.
“It’s been a challenging year because of the COVID-19 pandemic,” SFT president David Hudson said, “but we have persevered and plan to close 2020 in grand style with a loaded card. Our main event features two o the top-rated Brazilian middleweights, ‘Camelo’ and Sousa, with a title fight on the line for the winner. “Camelo” is the No. 1 ranked SFT middleweight contender, Sousa No. 3, and the victor gets a shot at ‘King Kong’.
“We’re also excited to have our first Xtreme title fight between Muniz and Mangara. They’re our top-rated lightweights in Xtreme fighting. Fans love watching Xtreme fights and we expect to have more Xtreme title fights in 2021.” 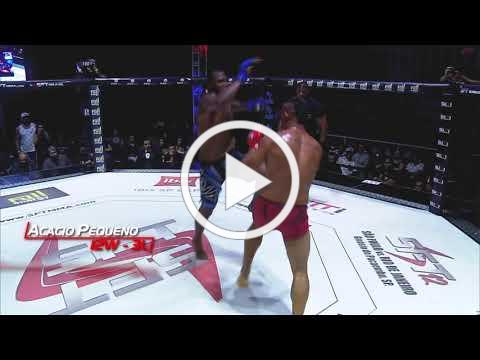