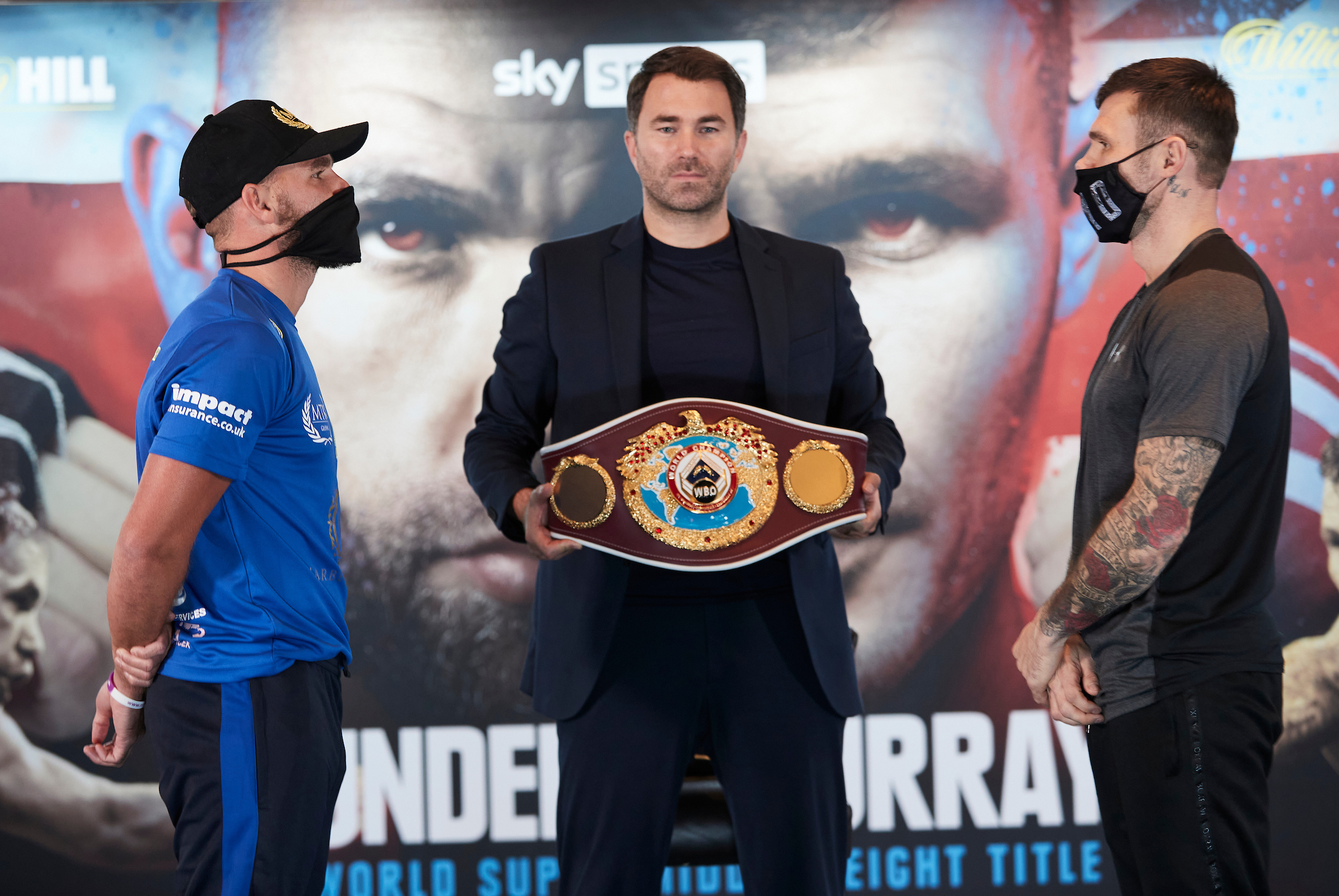 “We’re back in the bubble for a big night of boxing this Friday, the World Super-Middleweight Championship between Billy Joe Saunders and Martin Murray, live on Sky Sports in the UK and DAZN around the world. It’s great to be here. We’ve been lifted by the news that fans will return for the Anthony Joshua versus Kubrat Pulev fight on December 12. 1,000 allowed into The SSE Arena, Wembley for that, so this effectively, touch wood, will be our last ever show, we hope, behind closed doors. We’re ready to make the most of it, and ready for a great night of boxing.”

“First of all I’ve got to thank yourself and Sky for even getting us out this year. I didn’t think I was going to get out. All of the big fights were tied up, out of the fights that were left out there Martin Murray’s name was screaming out. We were supposed to fight twice before, it didn’t happen. He’s boxed for the World Title four times, he should have been a two-time World Champion, he was on the wrong end of two decisions.

“People are looking at this fight as a walk in the park for me and think I should win easily. If you look at Martin, he’s never took damage. He’s never been beaten up in a fight. Golovkin was what it was, he got him in his prime. I promised him his shot and it’s here. I believe that it’s my time to shine now. I’m doing this fight for my uncle Tom who passed away who was like a dad to me.

“I want the Jacobs fights and the Canelo fights and the Andrade fights now, but sadly everyone was tied up this year. The only one really worthy of taking the fight which was available was Martin Murray. He’s a four-time World Title challenger. In my opinion, two-time World Champion, so it’s not a bad pick out of the bunch.

“I know Martin is coming to fight. I haven’t been beaten on the UK soil since I’ve been 12-years-old. I’ve got a good track record, and I’m going to keep it that way. He’s going to bring a good game, but afterwards he can go back to St Helens, take his cash back and have a good Christmas and retire with the family, because that’s what I’m planning on doing, retiring him.”

“This is my fifth one now. I know how hard a fight it’s going to be. I really rate Billy Joe. We’ve got unfinished business. Everything happens for a reason. I firmly believe, and truly believe that the pull outs years ago, all of the little set backs that I’ve had, have all brought me to this point and like I said, I’m fit, focused and ready.

“I get it, I get why he pulled out to be honest with you. We all want those bigger fights. It makes sense. There was a little bit of frustration at the time but I left that where it was and I’ve got nothing against Billy. We shook hands when I got beat in my fight against N’Dam, he was on the card with me. He’s here now and he’s honored his word. He’s going to be in top condition himself and we’re going to lay it all on the line. It’s going to be a good fight.

“No one has ever done it in five times in the UK. I believe Groves four, Frank Bruno four, and I truly believe that there’s been a reason why I’ve picked myself up off the couch when times have been low and I’ve not wanted to go to the gym, but I’ve forced myself to get there. There’s been a reason for it and it’s for Friday. For me to achieve what no-one else has done in the UK.”

“It’s good to hear people saying things like that, it means I’m doing something right. I’m really looking forward to the fight night now. I’m going to put on a masterclass performance in another fan-pleasing fight. I come out every time and I give the fans what they want. I do what I need to do to get the win as well as that. I’m just going to go out and be me, box hard and box smart.”

“I’m super excited. I’ve never been on a stage like this. It’s awesome to get this opportunity. I’m happy to be sharing the ring with James, I think it’s going to be a great fight and I’m looking forward to it. I started boxing when I was 14, I didn’t really do much as an amateur but I got to travel enough with a few teams. I got over to Ireland when I was younger and I have a bunch of people supporting me out in Cavan, I got to train there for a bit. I had a really good time and I trained there for a few months when I was younger. I expect nothing less. I’m a fan, I like watching the kid. I’ve seen him enough and I think there’s a lot of stuff I can do in there to negate a lot of the stuff he does. I’ve got my own plan on what’s going to happen, it’s just about executing it.”

“I think there’s nerves with every fight, and coming off a loss I’ve got to prove myself now. Pressure is a privilege. If there’s no pressure then nobody believes in you, so I’m taking it in my stride. I’ve made the choice to move, so I’m now living in a hotel next to my camp. I’ve made a lot of sacrifices but it’s paid off because I’m at 118 for the first time. It’s time to make a statement.

“I think it would be easy for me to sit here now and say, ‘oh it’s fine’. I’ll be honest. I felt like the floor underneath me had been taken. I felt like my world was over. You’ve got to hit rock bottom to come up again. Now I’ve had that bitter taste of what a loss is like, I’m never going to taste it again. It’s made me more determined. Mentally and physically I’m a lot stronger.”

“Thank you Eddie, I am very grateful for the opportunity to be here and to participate in such a big event. I love to fight. I’m a fan of Shannon’s. I’ve watched a lot of her fights and I know this will deliver for the fans. I come from the MMA background as you mentioned, so I’m not scared of big boxing gloves. I promise to show my full potential and my aggressive style. I’m here to win.”

“I’ve got to focus on Friday night. He’s going to be a tough opponent. I can’t look too far ahead with this mandatory spot. My full focus is on Friday night and Cesar Nunez. You’ve got to make noise with every fight. That’s why people want to watch you, for the knockouts and the showbiz. Hopefully I can give a good performance and make a big fight next year with Billy Joe or any of the other World Champions. I think Saunders vs. Murray is going to be a good fight. It’s last chance saloon for Martin Murray so we’ll just have to see what version of him turns up. I’m picking Billy Joe on points.”

“First and foremost I would like to thank Matchroom and Sauerland for the opportunity. I’m coming to take this chance and win on Friday night.”

“I’m very happy and excited. Let’s go! There’s no pressure, I just need to do Lerrone Richards. Like I always say, it’s all about the skills. On Friday night you’re going to see that. Timo is a tough competitor. I’m taking him very seriously and I’m going to do a job on Friday night.”

“It’s going to be a hard challenge for me. I’ve seen a couple of Lerrone’s fights and he looks really skilful. I want to say thanks for this opportunity. When the fight starts I have to get going straight away. It’s eight rounds and I have to be fast.”

“Firstly I’d like to say thank you to Eddie Hearn and Frank Warren. I’m contracted to Frank Warren, I don’t know if anyone knows, but they’ve come together for this one and let me get on the bill, so I’d like to thank them for that. I feel like I’m ready to move forward. I feel like I done well as an amateur, I won National Titles and boxed for England. I feel like that’s helped me. I’ve got great fighters training alongside me like Billy Joe Saunders and a great team around me. I’m looking to move forwards fast. I’ve seen a little bit of John. I’m 25 and I don’t want to wait around too long, I want to get in the mix.”

“It’s a big opportunity for myself. We only got a week’s notice but we were already training to box three weeks ago on the Ultimate Boxxer show. That fell through because of my opponent testing positive for COVID. We had a couple of days off then had a call that very weekend asking if we’d be interested on boxing on a Matchroom show. I jumped at the chance. I’ve had a quick look at Lewis, he seems good at what he does. There’s not a lot to look at in his professional career. We’ve seen what he did as an amateur, let’s see how it stands him on the night. Good on him for jumping straight up, there needs to be a lot more of that in the sport now.”

“I’m looking forward to it and I’m ready to go. All through training everything has gone well. All of my road work has been done and all of my work in the gym has been done. I just can’t wait to fight now. Billy always gets on to you about me and that’s good, I kind of like it because he wants me to get out there so he gives me these opportunities. He knows I can perform. I look forward to putting on a good performance on Friday.

“This is another tough opponent for me but the better they are, the better I’m going to perform. I like that it’s going to be a tough one. I’m happy with my progress right now. I’ve sparred a lot of these guys and I hold my own against them. Right now I’m on the right track. When we get those fights in the future, I’ll do good against them guys.”

“100% I’m ready for this. I’ve trained really hard, we had a six-week training camp and I’ve trained twice a day every day. I’d just like to thank Matchroom for the opportunity. We’ve seen some upsets over the last few weeks and there’s going to be another upset on Friday night. I’m ready to go. I’m a 30-year-old man, he’s younger, a 20-year-old. All of the hype is around him. I’m an experienced man, I’ve been involved in Title fights on live TV. I’ve been there and I’ve done it. Let’s see if he can beat the stallion. I’ll be on him from the first round to the sixth round. I’m going to set a fast pace, I’m always in battles. I’m going to give 100% to get the win.”