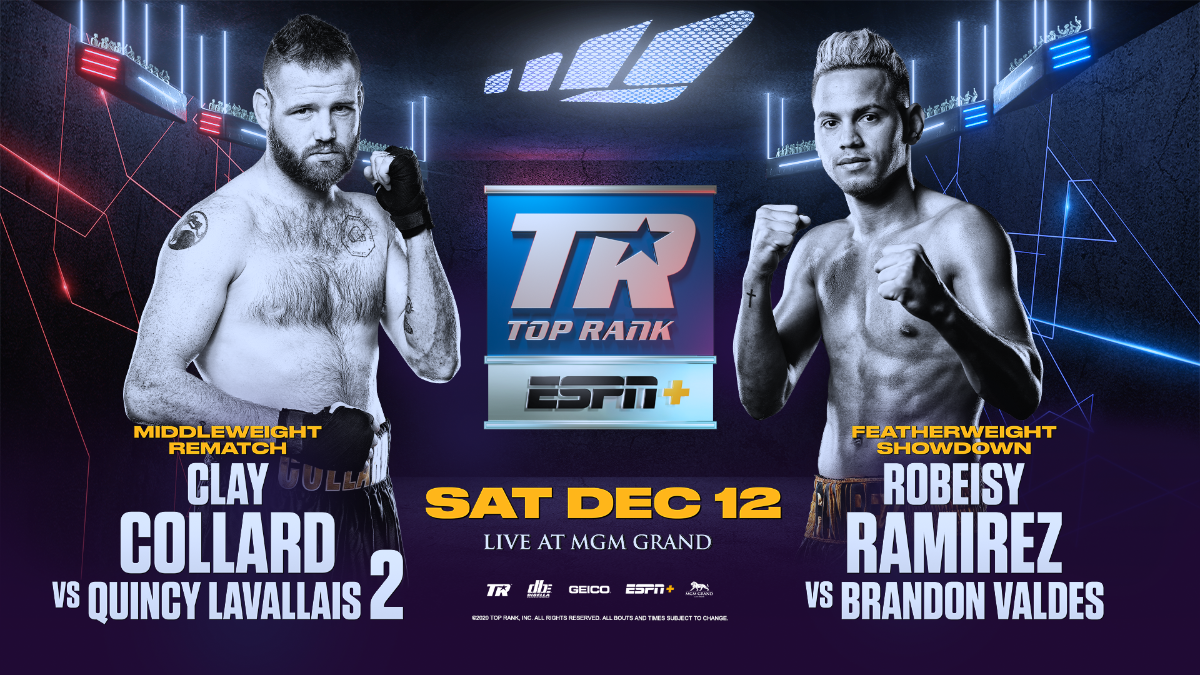 LAS VEGAS (December 4, 2020) — Boxing’s breakout cult sensation of 2020, “Cassius” Clay Collard, hopes to close out the year with a little slice of revenge. Collard will fight Quincy “Chico” LaVallais in an eight-round middleweight rematch of their June 2019 draw Saturday, Dec. 12 at MGM Grand Hotel & Casino in Las Vegas. Collard, who is also signed to PFL as an MMA fighter, is 5-0 with three wins over previously undefeated boxers in 2020.

The card will also see the return of two-time Cuban Olympic gold medalist Robeisy Ramirez, who is set to fight Brandon Valdes in a featherweight bout scheduled for eight or six rounds.

“Clay and Robeisy have emerged as Bubble fan favorites, so it is only fitting that they are part of our final show of 2020,” said Top Rank chairman Bob Arum.

Collard (9-2-3, 4 KOs) entered 2020 with a 4-2-3 record and coming off a TKO loss to light heavyweight phenom Bektemir Melikuziev. Following victories over unbeaten prospects Quashawn Toler (9-0) and Raymond Guajardo (5-0) to start the year, Collard made his Bubble debut June 18 with a decision victory over the 6-0 David Kaminsky. He scored second-round stoppages in his next two Bubble outings and now looks toward Louisiana native LaVallais (9-0-1, 5 KOs), the man who held him to a controversial six-round draw in his fifth pro fight. LaVallais has fought twice since then, notching a pair of first-round knockouts in New Orleans.

Collard and LaVallais were supposed to fight Oct. 17 on the Vasiliy Lomachenko-Teofimo Lopez undercard, but they each tested positive for COVID-19. After that hiccup, the rematch is finally on.

“I’m going to show up with a smile on my face, shake his hand and win this rematch,” Collard said. “I will prove the first fight wasn’t a draw. I’m the ‘0 collector,’ and I’m taking his undefeated record. Simple as that.”

Said LaVallais, “Unfortunately, we both caught COVID in October, but in God’s eyes, everything happens for a reason. I pray that he and his team are healthy, but I hope he’s ready because my ‘0’ is not going anywhere. This is Chico’s world, and he’s just living in it.”

Jesse “Bam” Rodriguez (12-0, 8 KOs) vs. Saul Juarez (25-12-2, 13 KOs)
8/6 Rounds, Light Flyweight
Rodriguez, the 20-year-old southpaw phenom from San Antonio, Texas, had a breakout performance Sept. 5 in The Bubble, knocking out the normally durable Janiel Rivera in the first round. Promoted by Teiken Promotions, Rodriguez has knocked out his last four opponents. Juarez is a two-time world title challenger who has only been knocked out once, courtesy of a left eye injury in his sixth pro fight in 2011.

About ESPN+
ESPN+ is the industry-leading sports streaming service that offers fans in the U.S. thousands of live sports events, original programming not available on ESPN’s linear TV or digital networks and exclusive editorial content from dozens of ESPN writers and reporters. Launched in April 2018, ESPN+ has grown to more than 10.3 million subscribers.