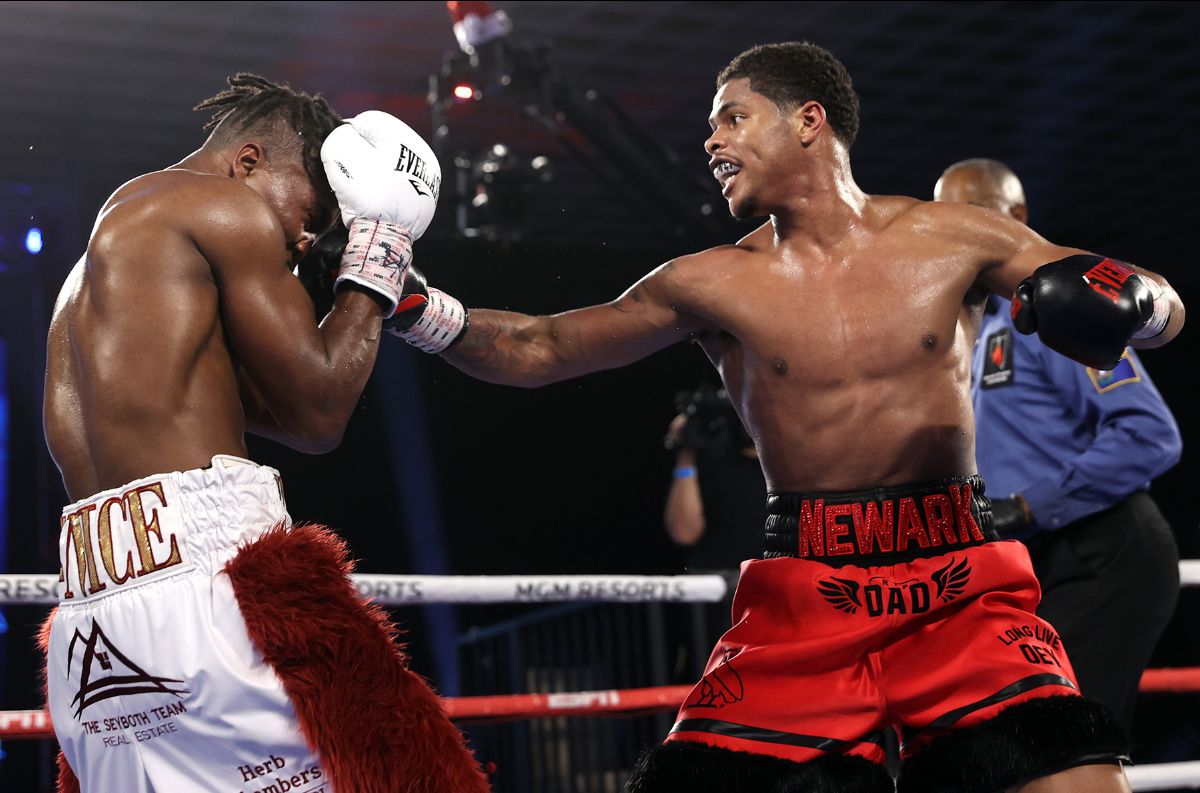 Up next, if he gets his wish, is a shot at the WBO junior lightweight world title.

“He knew how to survive. He came in there to survive, and that’s what he did,” Stevenson said. “I want the WBO belt first. The winner of {Carl} Frampton and {Jamel} Herring have to come see me. After that, we want {WBC world champion Miguel} Berchelt.”

Trailing big on the scorecards, Masayoshi Nakatani came from behind and earned the most significant win of his career.

After the bout, a jubilant Nakatani set his sights on a rematch with Lopez, now the undisputed lightweight world champion.

“I fought Lopez, and I wanted to fight him again, and that’s why I kept going,” Nakatani said. “I want to go for the knockout like I did today, and that’s going to be my style.”

Edgar “The Chosen One” Berlanga did it again. The Brooklyn brawler knocked out Ulises Sierra in the first round, the 16th consecutive first-round knockout for the 23-year-old phenom. Sierra (15-2-2, 9 KOs), from San Diego, had never been knocked out as a professional, but he was cannon fodder. Berlanga knocked him down three times in the opening stanza, forcing referee Russell Mora to stop the bout at 2:40.

Berlanga said, “{I want} rounds. The better competition, the better opposition we fight, I believe we’re going to get those rounds in. We ended 2020 with a bang. 2021 is a big year for us, and I’m looking forward to it.

“Tito Trinidad was my idol. He still is. Just being with him opened up my eyes as to what boxing is about, the dedication, the focus, leaving the streets and the bad people alone.”

Middleweight: Quincy LaVallais (10-0-1, 5 KOs) UD 8 Clay Collard (9-3-3, 4 KOs). Scores: 77-75 2x and 78-74. LaVallais upset cult favorite Collard over eight rounds, sweeping the last two rounds to earn the decision. Collard entered the fight 5-0 in 2020, but he was no match for the slick boxing of LaVallais. This was a rematch of a June 2019 draw, and LaVallais has now won three in a row since that disputed verdict.

Featherweight: Robeisy Ramirez (6-1, 4 KOs) TKO 6 Brandon Valdes (13-2, 7 KOs), 2:49. Two-time Cuban Olympic gold medalist Ramirez authored the most complete performance of his career, becoming the first man to stop Colombian veteran Valdes. Referee Russell Mora deducted a point from Valdes in the sixth for low blows, and soon after the foul, Ramirez unloaded on Valdes in a neutral corner. Mora stepped in and halted the bout with 11 seconds remaining in the round.