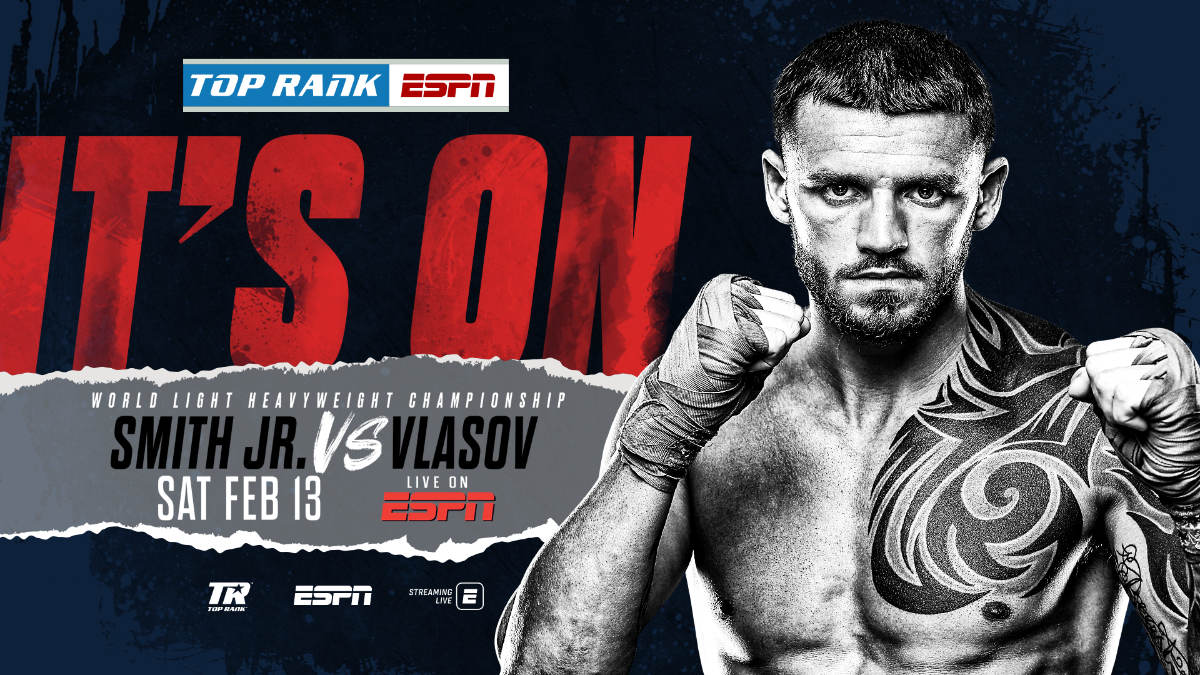 LAS VEGAS (December 22, 2020) — Light heavyweight contender Joe “The Beast” Smith Jr., the consummate everyman, spent more than a decade as a union laborer on Long Island. He now owns and operates a tree service business, chopping and trimming trees when he’s not training.

Promoted by Top Rank, in association with Joe DeGuardia’s Star Boxing and Patriot Promotions, Smith-Vlasov and Commey-Marinez will be televised live on ESPN and ESPN Deportes at 10 p.m. ET/7 p.m. PT.

“This is Rocky IV come to life,” said Top Rank chairman Bob Arum. “Joe Smith Jr. is boxing’s blue-collar hero, a relentless fighter who chops down trees outside the ring and chops down opponents when the lights are bright. Maxim Vlasov is a tough Russian who is going to meet Joe punch for punch in the center of the ring. This will be an early contender for 2021 Fight of the Year.”

DeGuardia said, “I am very confident that Joe Smith Jr. will be the new WBO world champion, but I also know that Maxim Vlasov is a strong and seasoned fighter who also wants to become champion. It will make for a great night of boxing on ESPN. Kudos to the WBO for recognizing Joe’s talents and mandating this fight, and to Bob Arum and Top Rank for their continued excellence during this pandemic.”

Smith (26-3, 21 KOs) is best known for sending living legend Bernard Hopkins through the ropes and into retirement in 2016, but a world title has thus far proven elusive. He received a shot at the WBA light heavyweight world title in March 2019 and nearly knocked out Dmitry Bivol in the 10th round, but Bivol hung on to win a unanimous decision. Smith rampaged in 2020, dominating Jesse Hart over 10 rounds and knocking out former world champion Eleider Alvarez in an August title eliminator. Those victories propelled Smith to the WBO No. 1 ranking and a second crack at world title glory.

Smith said, “I have worked very hard to get a second opportunity at a world title. I feel I have improved, and on February 13, I am going to make my dream come true and become world champion.”

Vlasov (45-3, 26 KOs), a 15-year-pro, has been a world-level operator at super middleweight, light heavyweight and cruiserweight. He moved down to light heavyweight in early 2019 and soon joined the ranks of the top contenders. In a six-month span, Vlasov stopped Omar Garcia in four rounds, topped longtime contender Isaac Chilemba by unanimous decision to avenge a 2011 defeat, and shut out the previously undefeated Emmanuel Martey over 10 rounds.

“This is a great chance, and perhaps my last opportunity, to finally become a world champion,” Vlasov said. “Smith is a strong and relentless fighter, so I expect a very serious challenge.”

Commey (29-3, 26 KOs), from Accra, Ghana, has been a lightweight since turning pro in his home nation in February 2011. He fell just short in his first attempt at a world title, dropping a split decision to Robert Easter Jr. in September 2016 for the vacant IBF title. Commey won the IBF title in February 2019 with a second-round stoppage over Isa Chaniev, then defended it in June with an eighth-round knockout over former world champion Ray Beltran. His title reign ended that December, when Teofimo Lopez emerged with a star-making second-round TKO. Commey has not fought since the Lopez fight and is re-energized for another world title run.

Commey said, “It’s been a long and frustrating wait to get back into the ring, and February 13 can’t come soon enough. I’ve kept myself in shape, but once I heard the date, I stepped up my training. All I’ve been thinking about is winning back my title. I am not looking past Jackson Marinez, as I know he is a tough, slick fighter, so he has my full attention. The road to redemption begins now.”

Marinez (19-1, 7 KOs), from Santo Domingo, Dominican Republic, entered 2020 largely unknown to fight fans. That all changed in August, when he outboxed the unbeaten Rolando Romero over 12 rounds. The official judges disagreed with most boxing observers, and Marinez lost a unanimous decision. Trained by Robert Garcia in Riverside, Calif., Marinez gets a shot at redemption and would enter the world title picture with a victory over Commey.