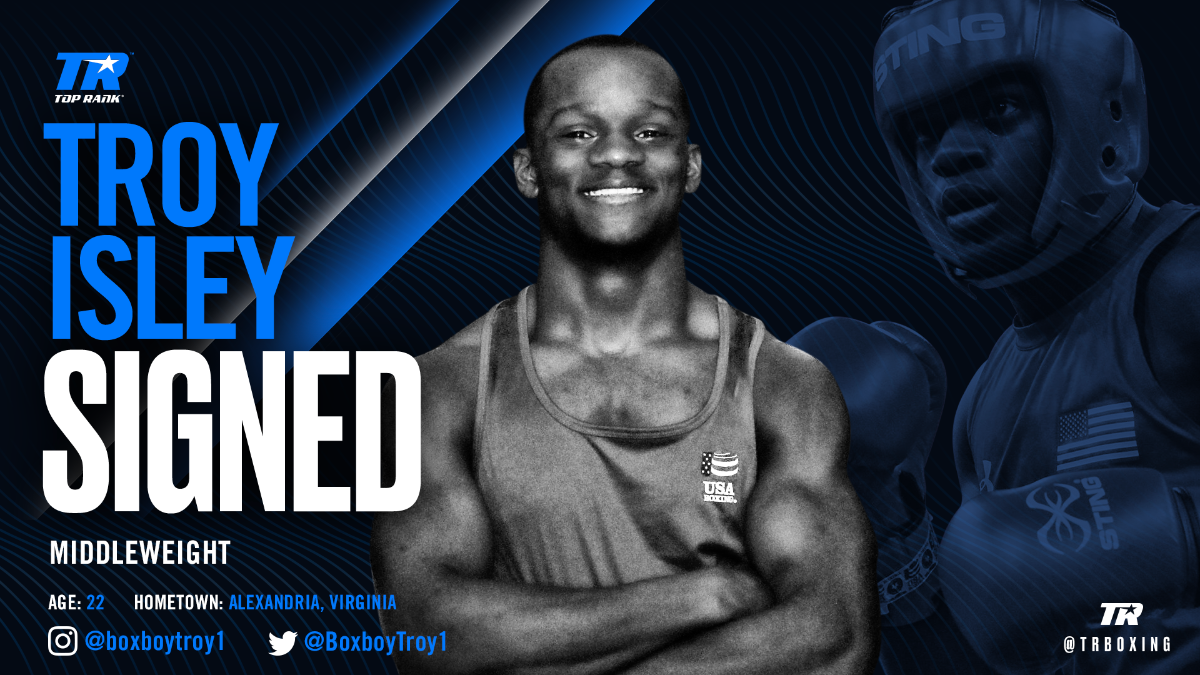 (January 19, 2021) —Troy Isley, a 2017 World Championships bronze medalist, is set for the next step. Isley, a 22-year-old native of Alexandria, Va., signed a multi-year professional contract with Top Rank and will make his debut Feb. 13 on the Joe Smith Jr.-Maxim Vlasov undercard. Top Rank will co-promote Isley with Antonio Leonard Promotions.

Isley’s head trainer is Kay Koroma, a longtime U.S. amateur coach who has guided his boxing journey since the day he entered Alexandria Boxing Club at the age of 9.

Said Isley, “I’m ready to turn over a new leaf. I wanted to go to the Olympics, but I did everything an amateur could possibly do. I want to hit the pro scene, showcase my talents, and pursue a world title. I naturally have a pro style. I can box when I want to box. If I have to fight on the inside, I can do that as well. I’ve fought every style, so I feel like I’ll be able to adjust to anything.”

“We’ve been following Troy’s progress, and we believe he’s one of the very best amateurs this country has produced in quite some time,” said Top Rank chairman Bob Arum.

Isley suffered a pair of close defeats in December 2019 at the U.S. Olympic Team Trials, which closed the amateur chapter of his career. In addition to the World Championships bronze medal, he won gold at the U.S. Championships in 2016 and 2017, a bronze medal at the 2019 Pan American Games, and a silver medal at the 2016 National Golden Gloves. He holds victories over 2016 Olympic gold medalist Arlen López, current junior middleweight contender Israil Madrimov, Austin “Ammo” Williams, Sebastian Fundora, Top Rank stablemate Josue Vargas, and lightweight star Devin Haney.