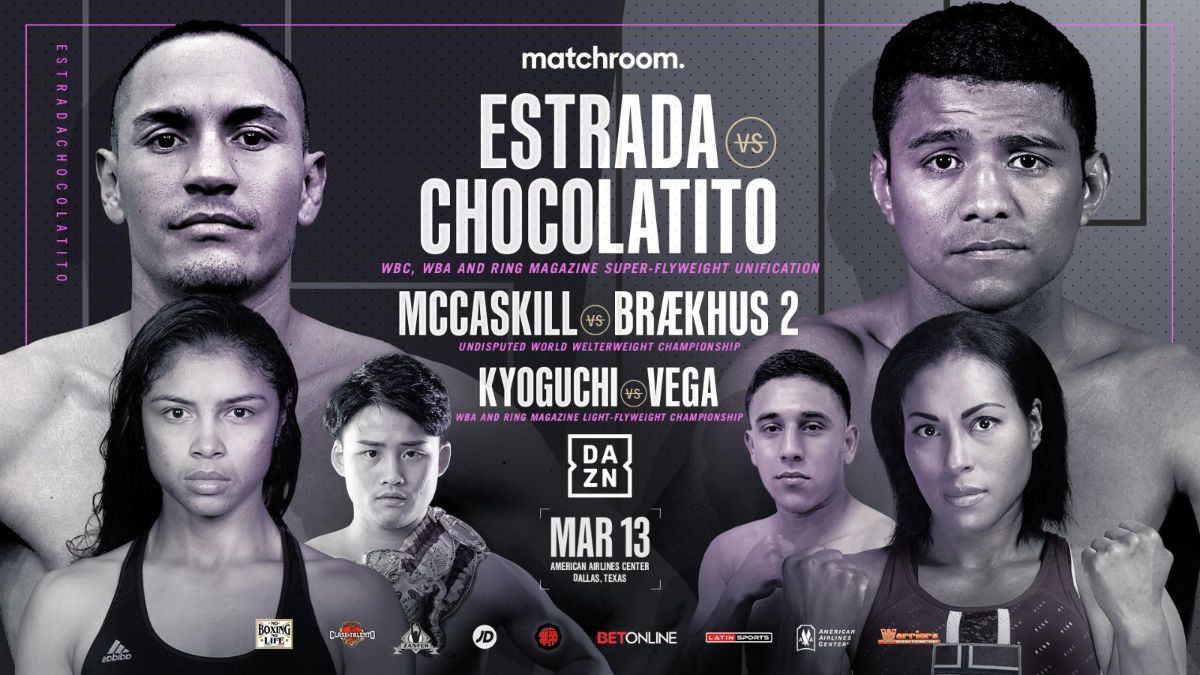 Jessica McCaskill and Cecelia Brækhus will rematch for the undisputed World Welterweight title on a stacked card on March 13 at the American Airlines Center in Dallas, live worldwide on DAZN, on a stacked card topped by the rematch between Juan Francisco Estrada and Roman ‘Chocolatito’ Gonzalez.

McCaskill (9-2 3 KOs) ripped the belts from the Norwegian star on the streets of downtown Tulsa, Oklahoma in August, snapping the long-standing unbeaten via majority decision and becoming a two-weight World champion in just her 11th pro fight in the process.

Brækhus (36-1 9 KOs) was denied a record-breaking night with McCaskill preventing her from recording her 25th consecutive successful World title defense, but she activated the rematch clause and will now go for revenge in the Lone Star state against the Chicagoan – but the champion was succinct in her belief that the belts will remain hers.

“I’m very focused on regaining all of my undisputed belts on March 13 in the rematch against Jessica,” said Brækhus. “It will be a very special night in Dallas for my supporters and for all of my worldwide fans who can watch the fight on the DAZN.”

Kyoguchi (14-0 9 KOs) makes his third defense of the WBA crown having stopped Heikke Budler for the strap in December 2018 to become a two-weight World ruler and then seeing off the challenges of Tanawat Nakoon and Tetsuya Hisada in June and October of 2019. In December, Matchroom announced a multi-fight promotional deal with the Japanese star, working with Clase Y Talento and manager Eddy Reynoso, and that relationship kicks off with his clash with Vega.

“I’m very happy to make my debut in the US under the guidance and management of Eddy Reynoso and with my promoter Eddie Hearn and Matchroom,” said Kyoguchi. “I want to thank them for the chance to prove that Japanese boxing is the best in the world. I am very grateful to them and we will put everything into becoming a star in the boxing world.”

“I’m very happy to receive this world title shot,” said Vega. “Kyoguchi is a great champion but I’m a hungry young contender and will conquer the championship on March 13. I want to thank my promoter Tuto Zabala Jr (All Star Boxing) for turning around so quickly, one week after signing and here is my chance, also to my manager Joe Gonzalez and to Eddie Hearn.”

“This is a huge night of boxing in Dallas,” said Hearn. “Cecilia and Jessica will put it all on the line in their rematch for the undisputed Welterweight title and Hirotu is a fighter that I am excited to see explode onto the big stage under the guidance of his manager Eddy Reynoso and Matchroom.

“With a brilliant main event in the rematch between Estrada and Chocolatito and plenty of young talents to be added to the card, this is an unmissable feast of fights for the fans in Dallas and on DAZN.”