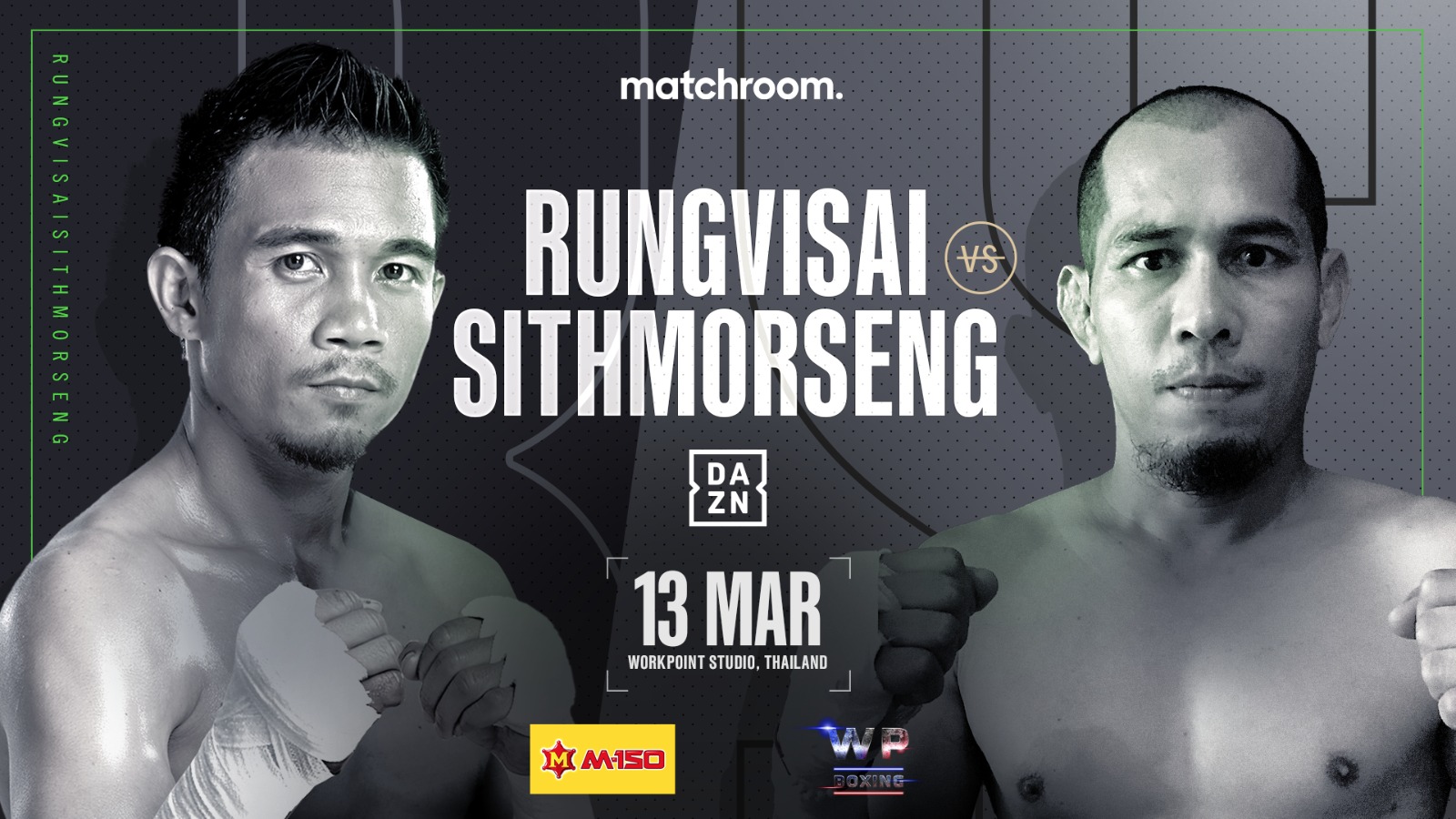 Srisaket Sor Rungvisai (49-5-1, 42 KOs), the former two-time WBC World Champion and Lineal Super-Flyweight World Champion from Thailand, is set to get back into the ring on March 13 (in Thailand) against former World Champion and current Thai Super-Flyweight champion – Kwanthai Sithmorseng [aka Ekkawit Songnui] (50-7-1, 27 KOs). The fight will be the main event of the WP Boxing series, the leading boxing program in Southeast Asia. The show will be live on DAZN globally (excluding Thailand) on March 12 in the US, 2021, 9.30 pm ET/ 6.30 pm PT.

Rungvisai is currently ranked first in the WBC’s Super-Flyweight world rating and has already been named a mandatory challenger for the WBC World Title. In December last year, the WBC officially ordered the winner of the unification bout between Juan Francisco Estrada and “Chocolatito” Roman Gonzalez to defend his WBC World Title against Rungivisai next within August or September this year. In the meantime, Rungvisai will have to win this upcoming fight against Kwanthai Sithmorseng to maintain his opportunity to challenge the World Titles from the winner of Estrada vs Chocolatito.

“I cannot wait to fight against the winner of Chocolatito and Estrada later this year to show the world that I am the top fighter in Super Flyweight. I would like to thank WBC and Eddie Hearn for committing to make this happen next.

“I will show the world in this fight against Kwanthai Sithmorseng that I am more than ready to face either Chocolatito or Estrada for the third time. I know that Kwanthai is very experienced. He is a former World Champion and also the current Thailand’s champion in Super Flyweight. He cannot be taken lightly, but I will be impressive and I will win by KO.

“It is exciting to be fighting on the same day as Chocolatito vs Estrada as it will be a great set up for our next fight. Thank you Matchroom, DAZN, and WP Boxing for this great opportunity.” said Rungvisai.

Rungvisai’s opponent in this fight, Kwanthai Sithmorseng, is a former WBA World Champion and the current Thailand’s Champion. He is a highly experienced boxer who fought at the World level, including fighting for a world title against the current WBO Super Flyweight World Champion – Kazuto Ioka.

“Srisaket Sor Rungvisai is the best fighter in Thailand, and he has done a great job for putting Thailand on the global boxing map by knocking out the legendary Roman Gonzalez. I have much respect for him, and I also realize that this is such a great opportunity for me to be back at the world stage.

“This can be a life changing opportunity for me. If I beat Rungvisai in this fight, I can get a chance to fight against the top guys in the division in World Title fights. I will do whatever it takes to make that happen.

“I was a World Champion once myself and I have long experience in the ring, so Rungvisai cannot intimidate me. I will train very hard to shock the world.” said Sithmorseng.

“This is such a great opportunity for me to fight on DAZN and to show the world who I am. I have established my name in Muay Thai since I was young, and my goal now is to become a World Champion in Boxing.

Pungluang Sor Singyu is one of the best fighters from Thailand for the past few decades. He won the WBO World title twice, and he has incredible punching power. However, this is my time now. I want to show the world that I am ready for world title fights. My goal is Luis Nery for his WBC Super Bantamweight title. Or if I can impress Eddie Hearn in this fight and get him interested in having me fight Murodjon Akhmadaliev, I will be up for that too. I am ready for anyone at 122lbs.

“Watch out for me. I want the world to remember “Rock Man” after this fight,” said “Rock Man” Chainoi Worawut.

“Chainoi Worawut is a great up and coming boxer. He has an incredibly entertaining fighting style. However, I am much more experienced than him. I have traveled the world fighting the best. He has never fought anyone like me. I will win by KO and use this opportunity to get myself back to world title fight,” said Punglung Sor Singyu.

“It is always a great honor to be working with Matchroom and DAZN. We are extremely excited to show our WP Boxing event and the best of the boxing scene in Thailand to boxing fans around the world.

“In the Main Event, we will have a fight between two former world Champions from Thailand. Srisaket Sor Rungvisai is our national hero. He made history for Thailand by beating Chocolatito twice and having two great fights with Estrada. Kwanthai Sithmorseng is a former WBA World Champion. He has almost 60 professional boxing fights experience, including fighting against many World Champions throughout his career. He is also the current Super-Flyweight champion of Thailand.

“On top of the Main Event, we also have two WBC Asia Title fights. Both fights are extremely competitive, and they will be absolute wars.

“’Rock Man’ Chainoi Worawut vs Pungluang Sor Singyu for WBC Asia Super Bantamweight title can be expected to be the Fight of the Year for Thailand and Asia. ‘Rock Man’ Chainoi Worawut is the most explosive and exciting rising star in Thailand. He is now ranked #6 in WBC World rating and is undefeated with nearly 100% KO rate. Pungluang Sor Singyu is the former Two-time WBO World Champion and the current WBA Asia Champion. He has fought many world class opponents throughout his career, such as Tomoki Kameda, Paulus Ambunda, and Amnat Ruenroeng. Both fighters have aggressive style and heavy punching power. It will be a war.

“Phongsaphon Panyakum vs Karoon Jarupianlerd for WBC Asia Super-Flyweight title will also be a very exciting and competitive fight. Karoon Jarupianlerd is a former World Title challenger of “The Monster” Naoya Inoue. He went 10 exciting rounds with The Monster, and he was the last man apart from Nonito Donaire that gave Inoue trouble. Phongsaphon Panyakum is an up-and-coming star with an exciting aggressive style. Both fighters expect to get an impressive win and enter the scene of Super-Flyweight as a top contender in the division,” said Bank Thainchai Pisitwuttinan, Promoter of WP Boxing series.