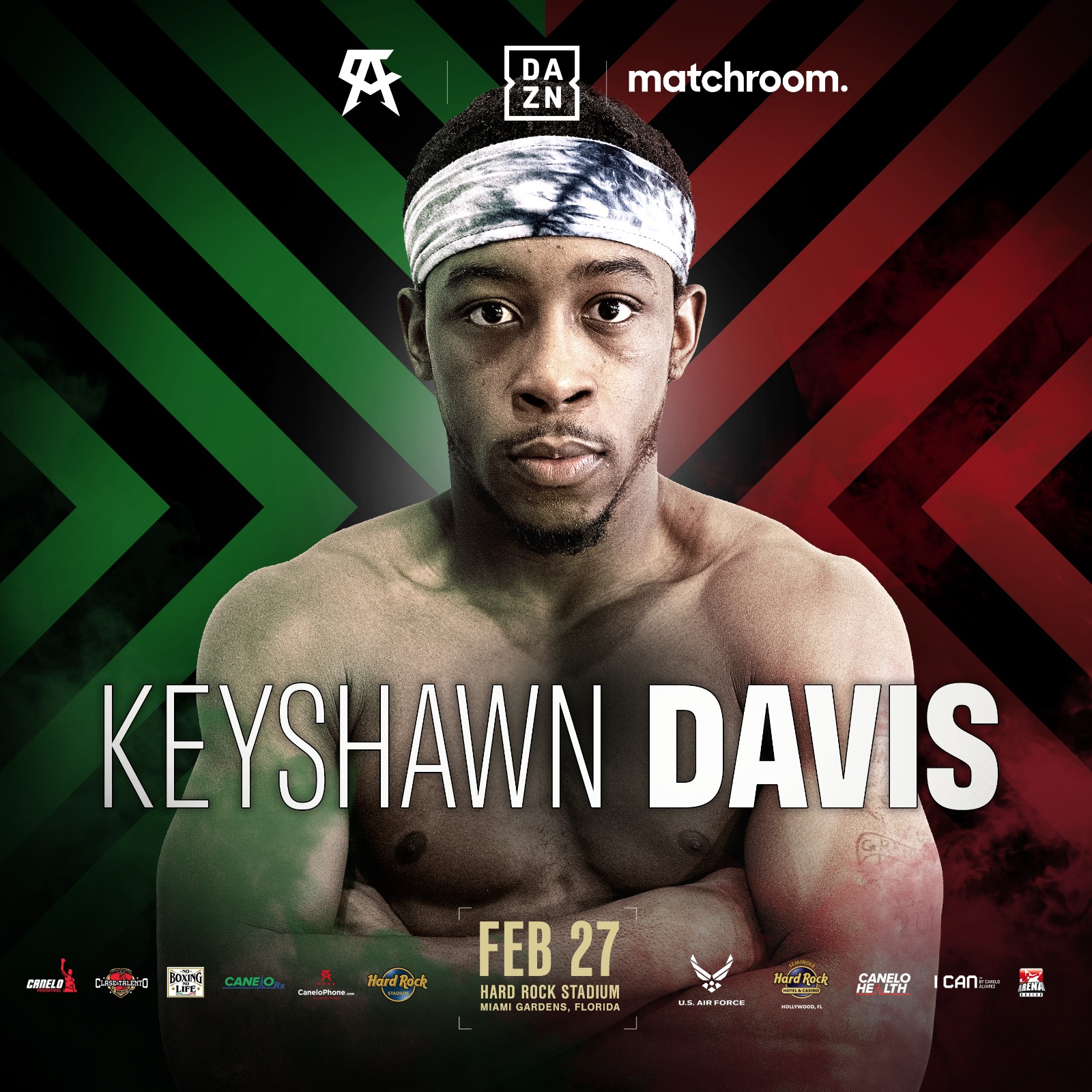 Amateur sensation Keyshawn Davis will make his professional debut on the undercard of Canelo Alvarez’s defense of his WBC, WBC Super and Ring Magazine World Super-Middleweight titles against Avni Yildirim on February 27 at the Hard Rock Stadium in Miami Gardens, Florida, live worldwide on DAZN (except Mexico).

TICKETS ARE ON GENERAL SALE NOW FROM TICKETMASTER – TICKETS START AT $55 (PLUS FEES) – FANS CAN VISIT HARDROCKSTADIUM.COM FOR MORE DETAILS

Davis makes his hotly anticipated pro bow on the star-studded card at the home of the Miami Dolphins, as the former 2017 Golden Gloves champion and 2019 World Championship silver medalist gets the chance to show his credentials on the biggest of stages.

The Norfolk, VA. talent, who celebrates his 22nd birthday the day after his debut, starts life on the same card as old foe Marc Castro, who made his own debut on Canelo’s undercard in Texas in December, and like Castro, has the brightest of futures in the pro game.

“I am so blessed to have the opportunity to have my long-awaited pro debut featured on the Canelo undercard, thank you to the team at Matchroom,” said Davis.

“I have been working diligently my entire career for my moment on February 27. This truly feels like a dream come true. My 22nd birthday is February 28. My win against my opponent will be the best birthday gift to date.

“A special thank you to the ones that have pushed me the hardest: My brothers, Kelvin and Keon Davis, my mother, Wanda Davis, and my sisters, Shanice and Shantel Davis. Also thank you to my friends, my former teammates, my fans, and my team. Without your unwavering support over the years leading up to this moment, none of this would be possible.

“My time is NOW. I am who and what they have been waiting for.”

“I’m delighted to have such a special talent in Keyshawn Davis make his pro debut on the Canelo card,’ said Eddie Hearn. “Keyshawn is one of the hottest young fighters in the States and is bound to be a big hit in the pro ranks – Davis has the world at his feet and it’s great for him to start his journey on the undercard of the pound-for-pound king, Canelo.”

Davis makes his introduction to the professional ranks on a stellar bill in Miami, topped by Canelo’s clash with mandatory challenger Yildirim.