Go behind the scenes as the Mexican warriors prepare for battle Saturday, Feb. 20 LIVE on ESPN 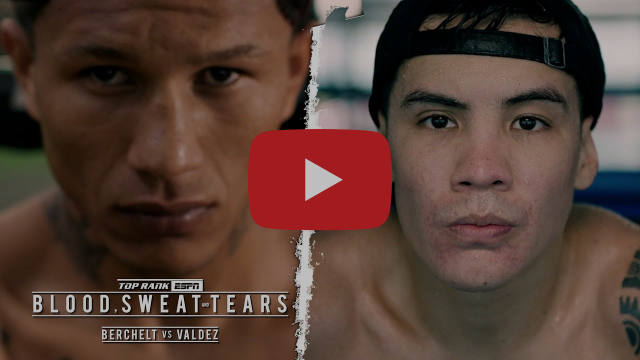 Before they go to battle Saturday, Feb. 20, live on ESPN from the MGM Grand Hotel & Casino in Las Vegas, go behind the scenes of both fighters’ camps with Part 1 of “Blood, Sweat and Tears: Berchelt vs. Valdez,” which is available now on Top Rank’s YouTube Channel.

Berchelt (38-1, 34 KOs) has defended his world title six times, five by stoppage, including victories over countrymen Francisco Vargas and Miguel Roman. Valdez (28-0, 22 KOs) made six featherweight title defenses before moving up to super featherweight, where he notched knockout wins over Adam Lopez and Jayson Velez.

“I’m going to knock Oscar out. I’m going to beat him in a big way,” Berchelt said in Part 1. “I will give him a poison that has no cure.”

Valdez said, “He’s a great fighter, but I consider myself a better fighter…I truly want that belt. I’m going to do whatever it takes to win.”